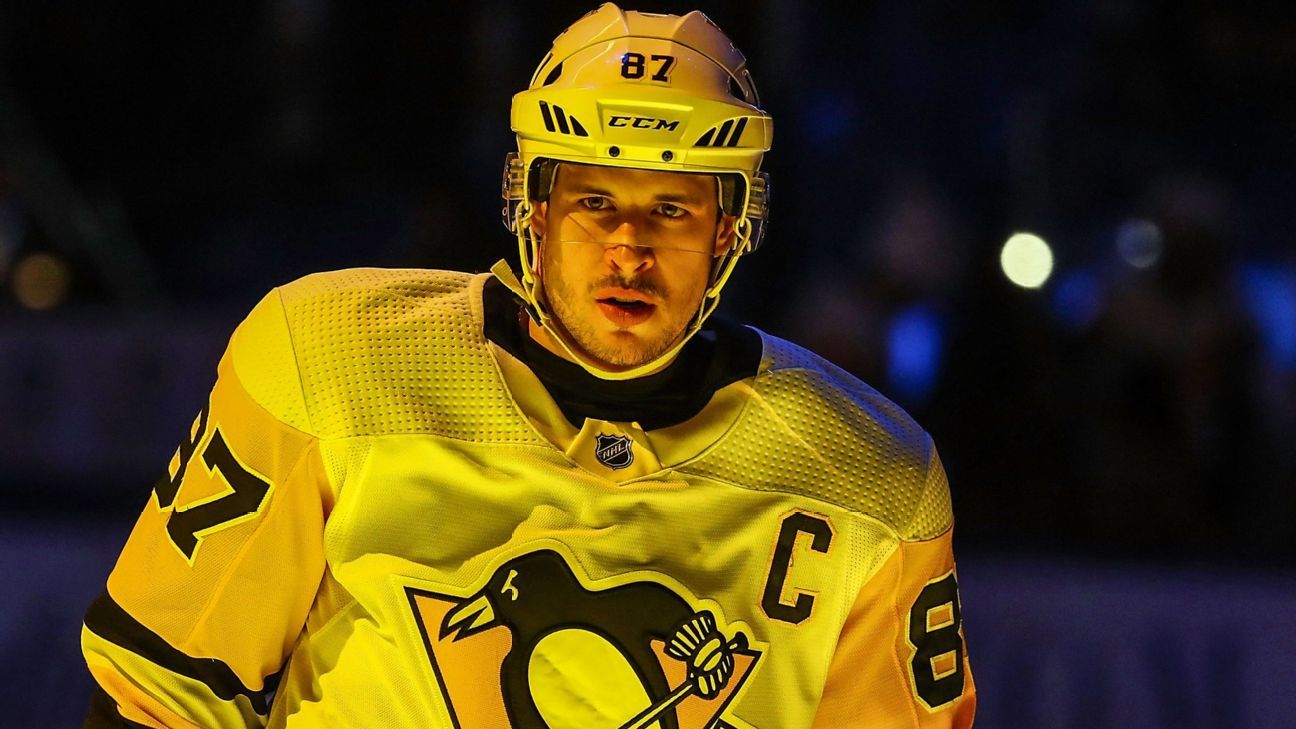 PITTSBURGH -- The Penguins are getting booed. It's opening night in Pittsburgh -- six months after the Penguins were swept in the first round of the playoffs by the New York Islanders -- and all summer, chatter has been about improving the team's chemistry and transforming the roster to be both younger and faster.

But the Sabres, who finished with the fourth-worst record in the East last season, are running all over the Pens. At one point, Buffalo holds a 14-3 edge in shots, with at least two careless giveaways leading to odd-man rushes. The boos from PPG Arena are subtle but noticeable at the first-period buzzer. They return when the game ends, a 3-1 Buffalo win.

In the locker room afterward, Evgeni Malkin gives a grave state-of-the team address the likes of which he usually reserves for midseason. "They [were] hungry. They played so much faster," Malkin says. "We take a couple bad penalties, and they changed [the] game. It's a young league right now -- we need to play hungry, we need to play faster, every puck we need to win. It's not good for us how we played. We need to change."

The following morning, Pittsburgh GM Jim Rutherford sits in his office at the team's practice facility. He too notes how quick Buffalo looked. "The expectations in Pittsburgh are very, very high," Rutherford tells ESPN. "You're expected to win a championship every year, and if you don't, then everybody analyzes it. People talk about how hard it is to win a championship, then people talk about how hard it is just to get into the playoffs. In the NHL, there's so much parity now, it's hard to just win a game. There are no easy games."

Rutherford was frustrated that his team "never came together" last season. He rewatched the four playoff games this summer -- not ad nauseam but enough "to get a handle on what happened," he said. The GM said Games 1 and 2 could have gone either way. "Once we went down 2-0, we just didn't play as well," he said. "When I go back and look at those first two games, we could have won those first two games, and it could have been completely different. But last season, the team never had that total team togetherness. I think some of it came from players being content. I don't blame them for being content -- there's been some good success here over the last four or five years -- but you can't be content to be successful going forward. So that had to change."

Since 2009, the Penguins, Blackhawks and Kings have won eight of the 11 Stanley Cups. But since Los Angeles won its last Cup in 2014 and Chicago in 2015, both teams have struggled to retool on the fly to sustain that success; they've been saddled with bloated, aging contracts, and for at least the past two seasons, neither team has looked like it is on the brink of contending again.

The Penguins are fighting to stave that off. In doing so, they have to begin the season without three of their top forwards. Malkin, Nick Bjugstad and Bryan Rust are all out "longer term" with lower-body injuries.

This offseason, Pittsburgh added five new players. The biggest subtraction was winger Phil Kessel, who scored 174 points the past two seasons. The biggest additions: 25-year-old Alex Galchenyuk, acquired in the Kessel trade, a skilled forward who has yet to realize his potential in the NHL and is on his third team in as many years, and 27-year-old Brandon Tanev, who signed a six-year, $21 million contract as a free agent and should give the Penguins speed in the middle six. Also joining the group is 24-year-old Dominik Kahun, acquired from Chicago for dependable defenseman Olli Maatta. Rutherford said they are "guys who give us more balance on our forward lines, back to where we were in '16, where the coach could play any line against the other team. So we certainly should have a more balanced lineup with more speed."

The Penguins also added six players during the previous season. Because of that, Rutherford is preaching just a bit of patience.

"From where we were a year ago to where we are now, we have 11 new faces in our lineup," he said. "It's a lot of change. Some of it was to transition on the fly, to get younger. Some of it was dictated by the cap. So I would suspect it will take our team a few weeks to get adjusted to each other."

The GM said he expects the coaching staff to jumble around line combinations until something clicks -- and that was before the Malkin and Bjugstad injuries.

The question is: Have they done enough, and can they gel in time?

There is an obligation for Pittsburgh to try to contend as long as Sidney Crosby and Malkin are around. Despite being 32 and 33, respectively, they are still the best one-two center punch in the league.

Crosby, who scored 100 points in 2018-19, is coming off his best defensive season as a pro. "People don't think it, but he's a grinder at heart," said former teammate Carl Hagelin, now with the rival Capitals. "From the time I was there, you could see how every year he took a step defensively and played as hard on the puck in his own end. He wanted to make a statement."

According to Evolving Hockey, Crosby's even-strength defensive goals against replacement was 2.9. That's impressive considering that he finished with a negative number in that metric the previous four seasons. Crosby finished fourth in Selke Trophy voting last season, his highest finish ever (he finished in the top 10 the previous three years).

"He doesn't get mentioned in the Selke because they view him as a different type of player," Rutherford says. "He always gets a lot of points. But his game evolved probably in '16, where he really became a strong two-way player. He was one of our centers that came back deep into the defensive zone and could transition as well as anyone in the league. When it's a broken play for the other team, you're going to find you're going to get a lot more chances because you're going to get your three-on-twos, two-on-ones, and that's not the guy the other team wants to see coming the other way."

Crosby has been nothing but consistent offensively. He has averaged a point per game in each of his 14 seasons. Of players to debut in the past 30 years and play a minimum of 20 games, the only player who has more such seasons is Joe Sakic. And Crosby has done it with a regular revolving door around him. Since 2007-08, according to Corsica, Crosby has had 112 linemates (that includes some guys who played just a smidge of ice time with him).

Malkin was coming off a so-so-season (by his standards), but Rutherford said the Russian center "worked very hard this summer physically and mentally and is in a good place right now." Malkin's line was the Penguins' best one in the Sabres game -- he scored the lone Pittsburgh goal -- but he was injured in the second game of the season against the Blue Jackets.

It's fair to wonder if the Penguins might be better off taking an approach like the New York Rangers'. After years of coming close to championships, New York took a self-imposed step back in February 2018 and sent a letter to fans telling them the team would be trading many familiar faces and stockpiling assets. Less than two years later, the Rangers are in a much better place.

Rutherford -- who is renowned for constantly tweaking his roster and seems like he's ready to make another "hockey trade" soon -- doesn't sound too keen on doing that just yet.

"We'll have to do it at some point," Rutherford said. "Sid and Geno aren't going to play forever. I do believe our window is still open, I'd say for a few years."