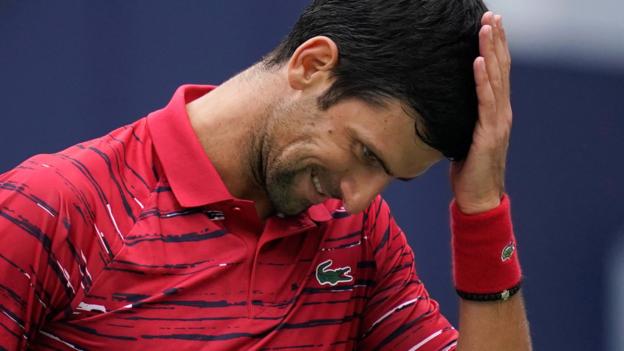 World number one Novak Djokovic was knocked out of the Shanghai Masters in the quarter-finals by sixth seed Stefanos Tsitsipas.

Greek 21-year-old Tsitsipas came from a set down - having lost the opening three games in seven minutes - to beat the defending champion 3-6 7-5 6-3.

He will play Daniil Medvedev in the semi-finals after the Russian defeated Fabio Fognini 6-3 7-6 (7-4).

It also marks the first time Tsitsipas has recorded a win over the current world number one.

Djokovic - who won the Japan Open last week - has never previously failed to make the semi-finals in Shanghai.

He now trails Rafael Nadal by 1,280 points in the battle for year-end world number one.

"He had the high-quality tennis and he played very well after his serve," the 32-year-old Serb said of world number seven Tsitsipas.

"He was backing up his serve with really good and aggressive first shots in the rally.

"I didn't make him defend enough. I just gave him enough time to really dictate the play from back of the court and he deserved to win."