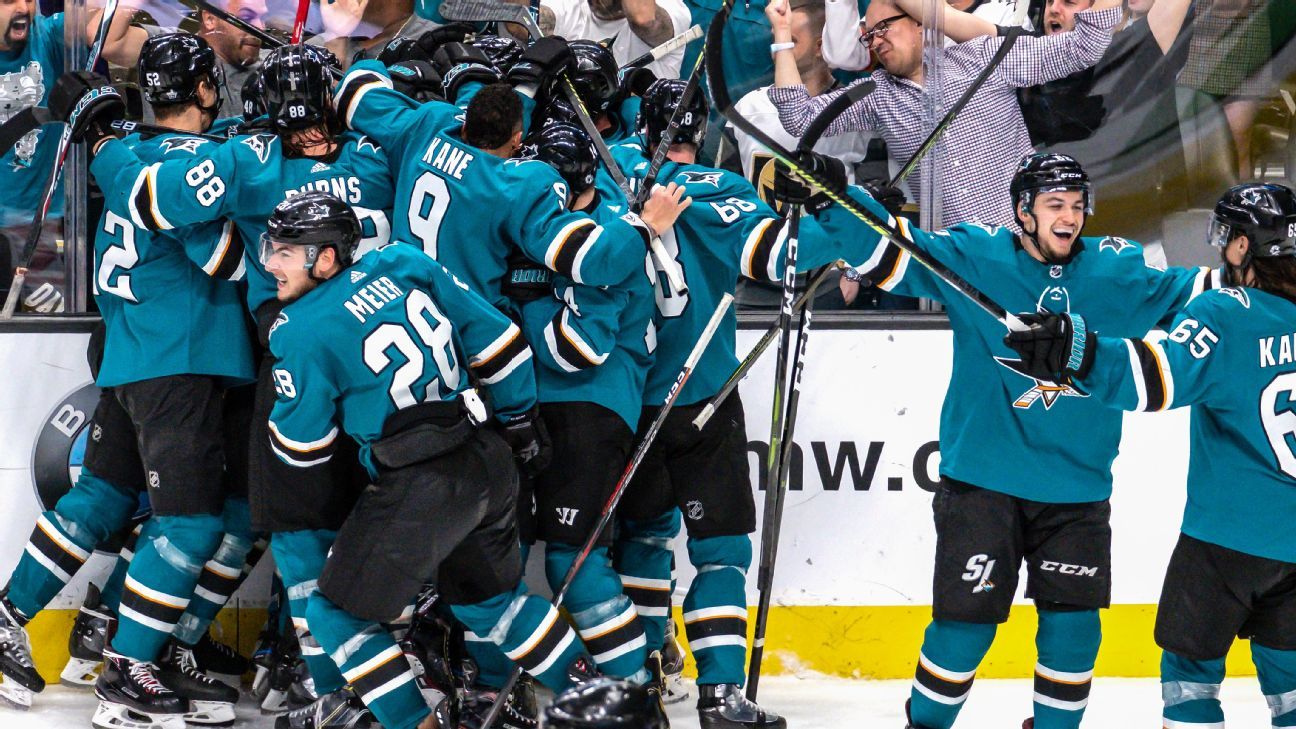 This might have been the craziest first round in Stanley Cup playoff history, and Tuesday night featured one of the wildest Game 7s you'll ever see. And oh yeah, there's another Game 7 in store on Wednesday.

Here's a recap of Tuesday night's action (check out replays of every playoff game on ESPN+) and what to watch for Wednesday night in today's edition of ESPN Stanley Cup Playoffs Daily:

Game 7: Boston Bruins 5, Toronto Maple Leafs 1 (Bruins win series 4-3) Are the Maple Leafs cursed? As long as they keep facing the Bruins in the playoffs, they might be. Toronto has lost each of its last three Game 7s -- all against the B's. No team in Stanley Cup playoff history has lost three straight winner-take-all games to the same opponent. The only other team in NHL, MLB and NBA playoff history to lose three consecutive winner-take-all games to the same opponent is the Pat Riley-led Miami Heat against the New York Knicks from 1998 to 2000.

����l��CASSIDY THANKS EDELMAN������#Bruins Head Coach thanks #Patriots WR @Edelman11 for chugging a beer and getting the @tdgarden crowd fired up during #Game7 of #Bruins win over #LeafsForever #TORvsBOS #Edelman @Patriots #WBZ pic.twitter.com/hjVbghSkRf

Game 7: San Jose Sharks 5, Vegas Golden Knights 4 (OT) (Sharks win series 4-3) We'll be talking about this game for years. The Golden Knights looked like they were surely going to win it after building a 3-0 lead by the third period. Then Joe Pavelski went down with an ugly injury, Cody Eakin was given a five-minute major for his role in that injury, and the Sharks rallied around their teammate in quite spectacular fashion.

The Sharks scored four goals during the major to grab the lead. Jonathan Marchessault tied it late, and that led us to overtime. (According to MoneyPuck.com, the Sharks had a 1.19 percent chance to win when they were given their five-minute power play with 9:13 left in the third period.) It took nearly the entire 20-minute OT period, but none other than Barclay Goodrow scored a beauty of a game winner after taking a feed from Erik Karlsson:

After one of the wildest playoff games, it felt appropriate that a wild card scored the game winner. Only Lukas Radil (2:36) had less ice time than Goodrow for the Sharks on Wednesday night. But he looked like a scoring dynamo on his series clincher.

The Bruins goaltender was sensational, stopping 32 of 33 shots. "I hope fans recognize what he did tonight," Cassidy said afterward. "I think you have to, as a fan, acknowledge when a player plays well. I know in this town when you don't, you hear about it -- that's fine, too. But tonight he played well and hopefully the people get behind him."

The 23-year-old was all over the Sharks' five-minute power play in the third period, scoring a goal and adding three assists. He's the first player in NHL history to score four points in a period in a Game 7.

Barclay Goodrow nets the winning goal in overtime as the Sharks knock off the Golden Knights in Game 7 to advance to the Western Conference semifinals.

Another look at the goal that ended it all.

The play that started San Jose's furious rally. You be the judge if it was an unfortunate, awkward fall or deserving of a five-minute major.

This one has been a tale of two cities, and one which would entertain Charles Dickens himself. The Canes have impressed in all three games in Raleigh. But the Caps have looked terrific in Washington, led by the unstoppable duo of Alex Ovechkin and Nicklas Backstrom. You'll hear a lot about Justin Williams being Mr. Game 7. The Hurricanes forward (and former Capital) has more points in Game 7s (14) than any other player in NHL history. It would be an upset if the Canes (playing in their first postseason in a decade) knocked out the defending champs on their home ice, but ... let's just say stranger things have happened already in these playoffs.

Zdeno Chara has quietly become one of the league's best Instagrammers this season.

Thank you Boston for bringing your best tonight. #madeforthis

"It's a f---ing joke. It's embarrassing. That's what it is. It changed the entire outcome of the game, and the season." -- Golden Knights winger Jonathan Marchessault on the five-minute major.