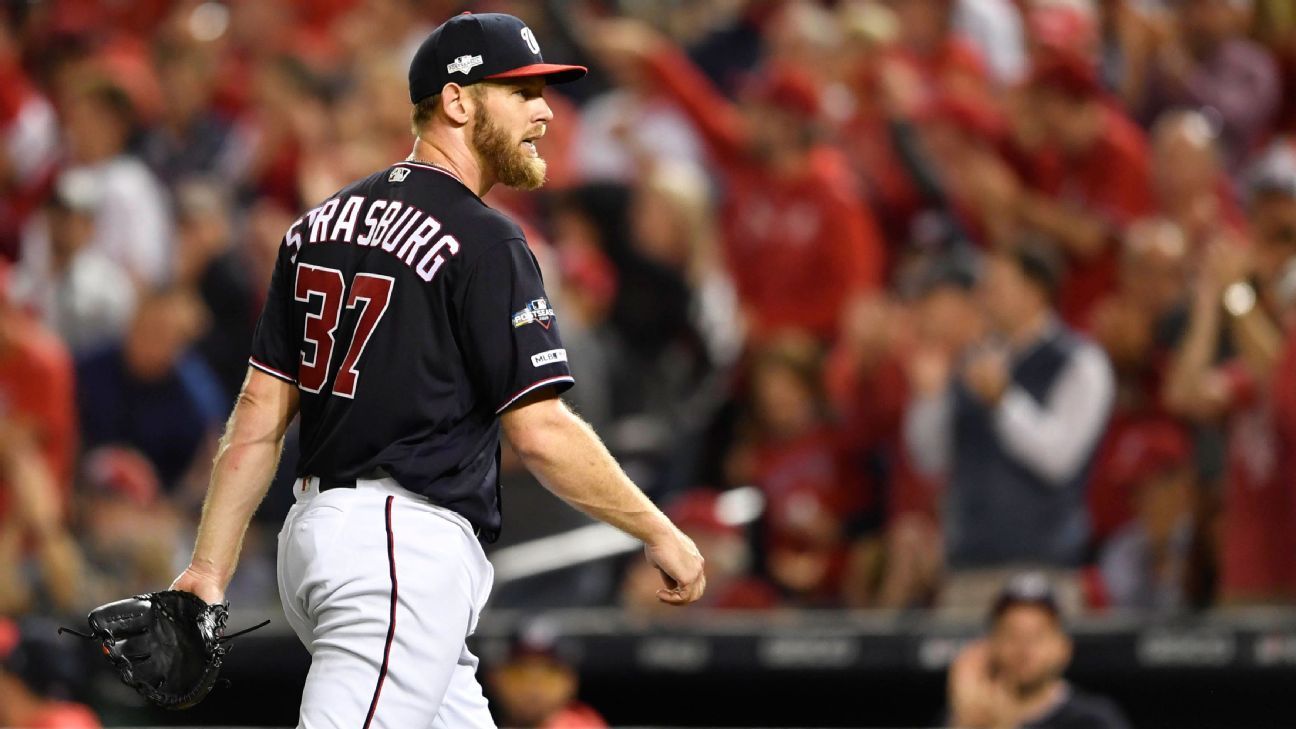 WASHINGTON -- Gerardo Parra wrapped both arms around Stephen Strasburg and wouldn't let go. Their embrace has morphed into something of a tradition. It began late in the season and spilled into the playoffs, partly because this Washington Nationals team has grown so close and partly because Strasburg detests these hugs.

For this one, in the late stages of a victorious night in Game 3 of the National League Championship Series, Parra held on long enough that a nearby Anibal Sanchez could get in on the action. Max Scherzer then spotted them from the end of the dugout, walked over, spread his long limbs wide and enveloped them all, suffocating Strasburg with affection.

Strasburg, pitching three nights after Sanchez and two nights after Scherzer, had just held the St. Louis Cardinals to one unearned run in seven innings, leading the Nationals to an 8-1 victory Monday that gave them a commanding 3-0 lead in the best-of-seven series.

In Game 1, it was Sanchez, expertly mixing a variety of pitches, who came within four outs of a no-hitter.

In Game 2, it was Scherzer, playing his fastball off his changeup, who gave up zero hits and struck out 10 through the first six innings.

In Game 3, it was Strasburg, armed with untouchable off-speed pitches, who struck out 12, walked none and added to what is becoming an illustrious postseason résumé.

In Game 4, it will be Patrick Corbin -- every bit as capable, every bit as imposing -- looking to pitch the Nationals into their first World Series.

"They're the heart and soul of our team," Nationals reliever Sean Doolittle said of the team's starting pitchers. "It's fitting that they're the reason we're in this position."

If not for Michael Taylor misreading a line drive on Saturday and Juan Soto slipping in the middle of a throw on Monday, the Cardinals would probably have been shut out for 27 innings in this series. Sanchez, Scherzer and Strasburg have combined for one unearned run allowed, three walks and 28 strikeouts in 21⅔ innings. The Nationals' starters boast a 1.59 ERA, a 0.88 WHIP and a .164 opponents' batting average in 56⅔ innings this month -- numbers that don't even include their contributions out of the bullpen.

Since the wild-card era began in 1995, only the 2012 Detroit Tigers, 2018 Milwaukee Brewers and 1995 Cleveland Indians have had starters' ERAs better than that of the current Nationals through their first nine postseason games, according to research from the Elias Sports Bureau. The Brewers, however, relied on openers, skewing the numbers. This postseason has been marked by the rebirth of traditional starting pitcher usage, and the Nationals -- not the Houston Astros -- stand as the prime example.

"They're feeding off each other. They really are," Nationals manager Dave Martinez said. "It's fun to watch."

"It's so impressive to me that when the crowd is the loudest, and in the biggest moments, is when he looks like he's his calmest," Doolittle said. "And you have to be able to stay calm if you're gonna execute your off-speed pitches in the zone the way that he was all night long."

Strasburg recorded all 12 of his strikeouts on off-speed pitches, the most in any start of his career. He allowed a leadoff double in the second, then fielded a comebacker and caught Marcell Ozuna between second and third base. He gave up back-to-back singles in the fourth, then got Yadier Molina to line out and end the threat. Paul DeJong laced a sharp single in the fifth, and then Strasburg retired the next five hitters, three of them on strikeouts.

Stephen Strasburg brings the heat, as he records 12 strikeouts from the bump in seven innings as the Nationals take down the Cardinals 8-1 in Game 3 of the NLCS.

When his pitch count was escalating and he needed a quick inning, Strasburg used only 10 pitches to get through the sixth.

When trouble brewed in the seventh -- on three singles, one of which scored a run after Soto's back foot slipped on an attempted throw home -- Strasburg became defiant.

Martinez paid a visit -- with two on, one out, a run across and Strasburg's pitch count at 109. The manager saw Strasburg grab his hamstring and thought about removing him. It was merely a cramp, Strasburg told Martinez. Happens all the time.

"I'm staying in the game," Strasburg said. "I want to finish this inning."

"You sure you're all right?" Martinez asked.

Kurt Suzuki chimed in and told Martinez to let Strasburg finish, and the two retreated. Strasburg proceeded to strike out Matt Wieters and Dexter Fowler on nasty changeups that darted below the zone. Opposing hitters have slugged just .218 on that pitch all season, 175 points below the major league average on changeups.

"It looks pretty much like a fastball, just 10 to 12 miles an hour slower and a lot of depth at the end," Cardinals second baseman Kolten Wong said. "It looks like a fastball until it gets to the cut of the dirt, and then it starts to sink or run. It kind of takes on both."

After the inning, as Strasburg was approaching his preferred dugout seat, he was met by Parra, the affable, veteran outfielder who joined the team in May. Parra has been among those who have worked diligently to soften Strasburg, who can be about as tightly wound as they come. Sanchez has tried to help.

"They're just trying to make Stras as uncomfortable as possible," Nationals outfielder Adam Eaton said. "It's great, and when Stras is uncomfortable, good things happen."

Strasburg -- the former prodigy with impossibly high expectations who sat out two prior Octobers but is maximizing what could be his final postseason run with the Nationals (he can opt out of his contract this offseason) -- provided a few light pats on the back. He tried to push away, but Parra pulled him back in. Strasburg laughed, swayed side to side and had the look of someone who was trying to savor the moment but didn't quite know how.

"I'm not much of a hugger," Strasburg said. "They kind of just surround me, so I just have to take it."

The Nationals need to capture only one more win, in as many as four tries, to give Washington D.C. its first World Series team since 1933.