England's faith in three-step protocol was rewarded. Now UEFA must get tough on racism 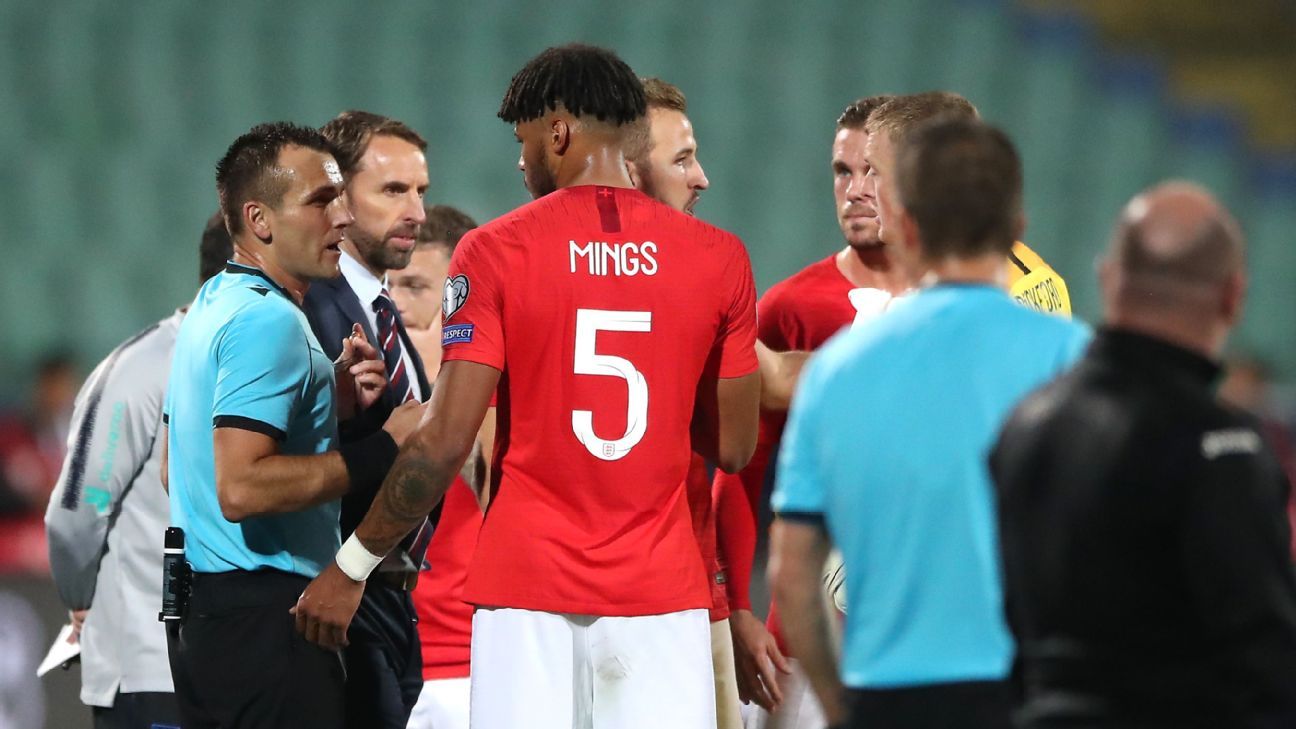 SOFIA, Bulgaria -- As Greg Clarke, the chairman of the English Football Association, delivered an impromptu news conference to speak of "appalling, terrible racism" during England's 6-0 Euro 2020 qualifying victory against Bulgaria on Monday in Sofia, a local journalist interrupted to offer his own verdict.

"An exaggeration," he shouted, from the third row of the seated area in front of Clarke.

On a night when Croatian referee Ivan Bebek triggered FIFA's three-step protocol -- whereby a match is first paused, then suspended for a period before ultimately being abandoned on the third instance of racist abuse -- by halting the game not once, but twice, following racist chanting directed at England's black players, the reaction to Clarke's comments was perhaps an indicator of the challenges faced not only by football, but society itself when attempting to eradicate the stain of racism.

On both occasions when Bebek halted the game -- the first time, after England's Tyrone Mings had complained of an incident in the 22nd minute, an announcement over the stadium loudspeaker warned of the match being abandoned -- fans in the supporters' section booed and jeered the decision. This was, let us not forget, a game that was being played in a stadium with 5,000 seats closed off as a UEFA punishment following racist behaviour during the previous Euro 2020 qualifiers against Kosovo and Czech Republic.

Krasimir Balakov, the Bulgaria coach, said before this game that his country "doesn't have a big problem, like England." But Raheem Sterling, after he had also been racially abused in the Vasil Levski Stadium, tweeted, "Mmmmh, not sure about this one chief." When asked about the abuse directed at England's players, Balakov replied by saying, "If it happened, I'm sure it was a small group of people who were out of their minds."

- England-Bulgaria halted under UEFA racism protocol
- Euro 2020: Who will reach the finals?
- Euro 2020 qualifying: All you need to know

If it happened? Balakov may not have been aware of it, but this reporter heard racist abuse on a several occasions. It happened, and there can be no escaping that fact.

Even on a night when England's black players -- Mings, Sterling and Marcus Rashford were all targeted -- were audibly abused and when home supporters were pictured making Nazi salutes, the sense of denial within Bulgarian ranks was a further, sad element of a match that brought the issue of racism in football into sharp focus. Gareth Southgate, the England manager, spoke after the game about how a "major statement" had been made by his players and staff by triggering the three-step protocol, but he also accepted that some would have wanted his players to walk off.

It was, unquestionably, a shocking night in the Bulgarian capital.

Sadly, the events were not unexpected. England's players were subjected to racist chanting during an away victory against Montenegro in Podgorica last March and have since spoken about what they would do, collectively, if it happened again. They came to Sofia prepared for the worst. Tammy Abraham said last week that he and his teammates were prepared to walk off the pitch if they were subjected to racist abuse, with Southgate and Sterling both later adding that they would not walk off unilaterally, but instead leave the match officials to implement the three-step protocol.

Step 1, as followed in Sofia, is when the match officials halt play and an announcement warning of abandonment is made over the PA system. Step 2, following a further outbreak of racist behaviour, enables the referee to take the players off the pitch for a cooling-off period before returning to the field following a further warning to supporters. Southgate and his players were offered this option on 41 minutes -- a decision that, according to pro-equality and inclusion organisation Kick It Out, should have been determined by the match official rather than presented to players and managers -- but declined to take the offer due to the half-time interval looming. Had there been a further incident, the referee would have been able to trigger Step 3, which would have been to abandon the game.

"I explained to the players that if anything else did happen in the second half, we would be coming off," Southgate said. "We all saw the second half was calmer, and that allowed our players to do their talking with the football."

Aston Villa defender Mings, making his England debut, was the player who set the protocol in motion by making his complaint following racist chants while he was in possession.

"I am proud of how we dealt with it and took the appropriate steps," Mings said. "I could hear it as clear as day. It doesn't affect me too much. I feel more sorry for those people who feel they have to have those opinions.

"But I am very proud of everyone for the decisions we made. I went to Harry Kane first. He spoke to the manager, who then spoke to the fourth officials. Everyone was aware of it, but we ultimately let our football do the talking and didn't get distracted by anything."

Reaction on social media has highlighted the difficult decision faced by Southgate and his players, with many suggesting England should have walked off, but on this occasion, the protocol worked.

"It gave all of the players clarity," Southgate said. "That gave them comfort, because it wasn't them having to make a decision. They felt protected by the process. But I have to say that the referee and his officials were outstanding, because they were under incredible pressure."

Ivelin Popov, the Bulgaria captain, spent the first five minutes of the half-time interval appearing to plead with supporters to behave, making hand gestures urging them to calm down. Moments earlier, a large group of supporters dressed in black left the stadium.

Whether Popov's words and the departure of that group of supporters played a significant role in defusing the situation is open to debate, but the second half passed by without incident as England secured their 6-0 win. What happens next will offer a true gauge as to whether the events in Sofia will prove to be a turning point for the issue of racism in football.

FA chairman Clarke revealed that UEFA have already committed to launching a thorough investigation, but how will that manifest itself? Will the punishment, whatever it proves to be, act as a deterrent or will football once again fail to react appropriately?

From paltry fines to partial ground closures, football's authorities have too often fallen short when it comes to dealing with racism. For their fans' racist abuse last March, Montenegro was ordered to play two home games behind closed doors and pay a fine of €20,000.

On this occasion, however, England put their faith in the three-step protocol, and it worked. The big challenge now lies with UEFA and whether they can impose a sanction that is tough enough to eradicate the scourge of racism in football.