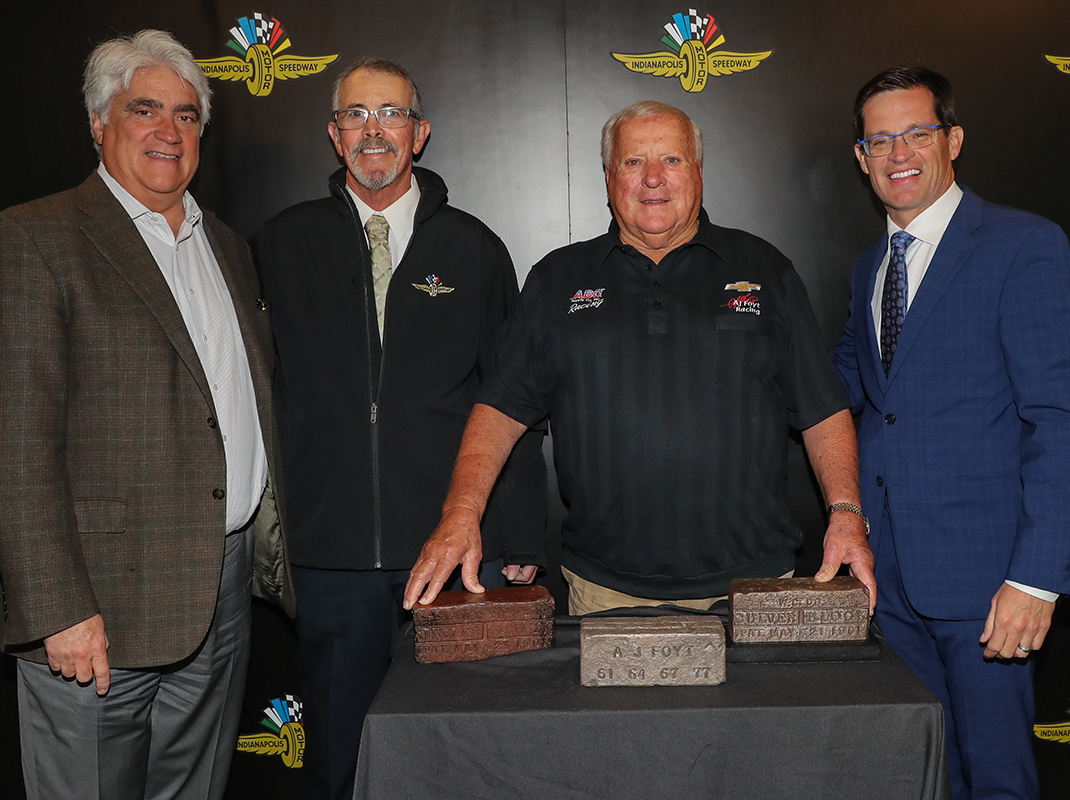 INDIANAPOLIS – Before placing a commemorative bronze brick into Indianapolis Motor Speedway’s famed Yard of Bricks start/finish line on a rainy Thursday morning, legendary A.J. Foyt recalled what it was like back in the day to race on that surface.

“All I can say is I won it with the whole straightaway of bricks,” said Foyt, 84, referring to his first win 58 years ago. “I won it with the Yard of Bricks. It was a lot better when they took the bricks up (and paved the front straight with asphalt) because it was rough. It would take the fillings out of your teeth when you’d run across them.”

“I’m glad to be the first one,” said Foyt, appropriate since he was the first four-time winner. “You always want to be first. That means a lot to me. I never was happy when I ran second or third. That was my whole life. I didn’t want to settle for second or third. I had to a lot, but I wasn’t happy about it.”

Tucker used silicone bronze to create the 18-pound brick in the welding shop on IMS grounds. Foyt was also given an identical brick mounted in granite to take back home to Texas.

“I’m glad to have been a part of it,” said Tucker, who has worked at IMS as a welder and fabricator for 15 years. “His legacy will go on. As an artist, that’s what I wanted to make sure of.”

Boles explained how this new tradition was a twist from 1909, when Indiana Gov. Thomas Marshall helped IMS founding partner Carl Fisher place a commemorative brick at the start/finish line when the original 3.2 million paving bricks were installed.

In 1961, that tradition continued when IMS owner Tony Hulman placed a gold brick at the start/finish line, joined by Ray Harroun, winner 50 years earlier of the first Indy 500, and Louis Schwitzer, the first winner of a 5-mile, two-lap race at the track in 1909.

Boles reminded this is the second time Foyt has placed a brick among the 573 remaining on the track. He joined IMS chairman Mari Hulman George to do the honors in 2011 in commemoration of the centennial anniversary of the Indianapolis 500.

“The driver bricks are going to be in the fourth row, four rows from the center,” Boles said. “We’re playing off the fours.

“There’s one spot left, and we’re hoping maybe Helio Castroneves can join that group,” Boles said. “We’re trying to give him extra incentive this year to really go after his fourth win, so we can celebrate another four-time winner.”

Tucker confided that when he created the first brick, he thought he had made a mistake because of all the nicks in the creation.

“Then I got the original brick out and saw that it picked up every detail in the original,” Tucker said.

That made sense to Foyt, who said of those old bricks, “They had a lot of marks in them.”

Foyt, a native of Houston, was in town for Wednesday’s NTT IndyCar Series Open Test to see how his two-car team looked in preparation for the 103rd Indianapolis 500 presented by Gainbridge on Sunday, May 26.

He recalled how he arrived at the track as a rookie in 1958 and never imagined he would still be coming back 61 years later.

“It’s nice to be honored here, but who thought I’d still be living and talking to you today,” Foyt said. “I damn sure didn’t think I’d be here, but I’m here.”

Then he repeated a familiar testimony of what Indianapolis Motor Speedway and the Indianapolis 500 mean to him.

“A lot of drivers who won this race felt they built Indianapolis,” Foyt said. “Indianapolis is what made A.J. Foyt what he is today. I won a lot of great races all over the United States, but the one race that’s always important to me was right here, and it still is.”

Not known for being overly sentimental, Foyt likes the idea of knowing his name will be remembered literally in the track long after he’s gone.

“It’s a great honor to be back here this many times,” Foyt said. “I’d like to be here another 50 or 60 years. I know that’s not going to happen. At least I’ll have a brick that people can look at.”

More in this category: « East Carolina Backs Weatherman & Ware At Bristol Michael Self Takes Hot Streak To Talladega »
back to top