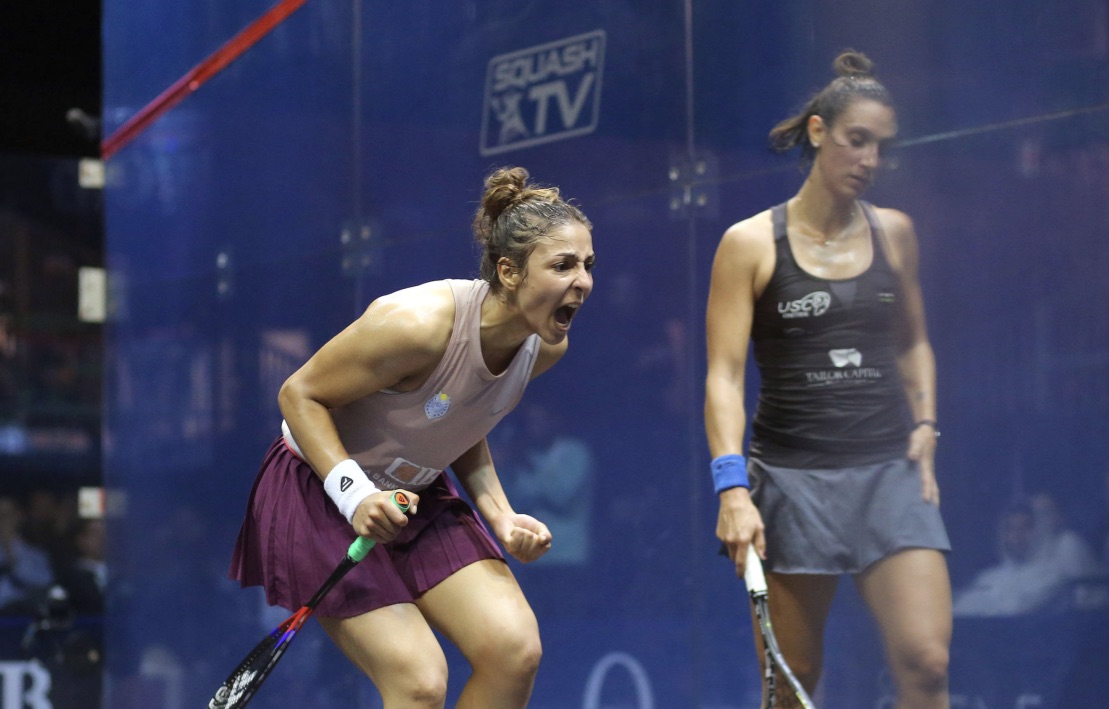 Egyptian World Junior Champion Hania El Hammamy claimed the biggest win of her career to date as she completed a stunning comeback from two games down to upset World No.4 Camille Serme at the foot of the iconic Great Pyramid of Giza – meaning she will appear in the semi-finals of the CIB PSA Women’s World Championship for the first time in her career.

The 19-year-old El Hammamy – who was crowned World Junior Champion in August – was appearing in her maiden senior World Championship quarter-final and initially found it difficult against the intensity of her opponent, with Serme stepping up the court and attacking at the front of the court to go two games ahead.

But the French player lost her attacking game in the third and El Hammamy came out firing on all cylinders, giving it everything in her arsenal, taking that game and the fourth to draw level. A shellshocked Serme went 5-1 down in the decider, but fought back from the brink to level at 9-9.

A stroke then put El Hammamy match ball up, and she followed that up with a perfect forehand drive in the next rally to book her spot in the last four of the most prestigious tournament on the women’s tour.

“I’m over the moon, I can’t believe that I was 2-0 down, I thought I’d lost but I wanted to keep fighting and enjoy it,” El Hammamy said afterwards.

“I’m playing in the quarters, which is an achievement for me, and I wanted to keep fighting, even if I lost. I think when I never gave up, that was the key, and I played the best squash I had in the last three games.

“I wanted to win so bad, I was so excited in the beginning, I didn’t really focus on my game plan or what my coaches told me. When I was 2-0 down, I thought I need to keep focusing on what they said and I’m glad it worked. I have my grandma here with me, and every time she is here I make her upset. She was here with me at Black Ball when I beat Nour El Tayeb, so I think she is my lucky person.”

Defending champion El Sherbini (pictured) will be El Hammamy’s semi-final opponent after she moved to within one win of a sixth World Championship title decider courtesy of an 11-7, 11-9, 13-11 victory over New Zealand’s Joelle King, meaning all four semi-final spots will be taken up by Egyptian players.

El Sherbini is appearing at her first tournament of the season after a knee injury forced her to pull out of both the Oracle NetSuite Open and U.S. Open, but the three-time World Champion has dominated her opponent’s so far in Cairo, claiming four successive victories without dropping a game.

“I’m back into the semis in my first tournament back,” said El Sherbini, who celebrates her 24th birthday on the day of the final.

“I don’t want to put any pressure on myself, I just want to enjoy my squash and the atmosphere and the crowd gives me the support and I’m going to take it as an advantage. It’s really good that we have a tournament here in Egypt, so that young juniors can come and watch, and hopefully they can learn and we can see them in the future.”

Makin makes it through to his first Platinum semi-final

Welshman Joel Makin has reached his first PSA Platinum semi-final after overcoming French giant-killer Baptiste Masotti 11-3, 12-14, 11-8, 11-2 in the men’s CIB Egyptian Squash Open, which is taking place alongside the women’s tournament at the Pyramids.

Masotti was appearing in the quarter-finals of a Platinum event for the first time after successive upsets against former top five players Borja Golan and Miguel Rodriguez, while he also upset Malaysia’s Eain Yow Ng to earn his place on the glass court in front of the Pyramids.

He looked overawed by the occasion in the opening stages, taking just three points as he went a game down, but he struck back to take the second on the tie-break, and put the World No.12 under serious pressure in the third with some impressive shot-making.

However, Makin’s experience saw him over the line in the third, and that seemed to drain his opponent’s confidence, with a comfortable fourth game victory seeing Makin advance to the last four.

“He was attacking freely and going in short and the ball was quite dead,” said Makin.

“Credit to him in the middle, the first two games he was clinical in the middle. The third game was crucial, I had to get the length across the backhand, and once I did that it took the middle away and I had a few more chances.”

He became the first man in a decade to win a trophy in front of the iconic landmark when he beat current World No.1 Ali Farag to win the 2016 Al Ahram Open, and he will look to make it back-to-back finals when he takes on Makin next.

“I had to take care of every shot and in the first game I couldn’t even get past him in the middle, so I had to focus on that and put him in the back corners and attack from the middle a little bit more,” said 28-year-old Gawad (pictured).

“I’m really happy to get through to the semi-finals at my favourite tournament ever. I love playing in my home country and in front of the audience here.

“You get a lot of support here, and I feel like I’m just practicing, driving to the venue and then going back home, so I feel like it’s just practice and not a tournament.”

The semi-finals take place on Thursday October 31, with play getting under way at 18:30 (GMT+2). Action will be broadcast on SQUASHTV (rest of world), Eurosport Player (Europe only) and the official Facebook page of the PSA World Tour (Indian subcontinent).