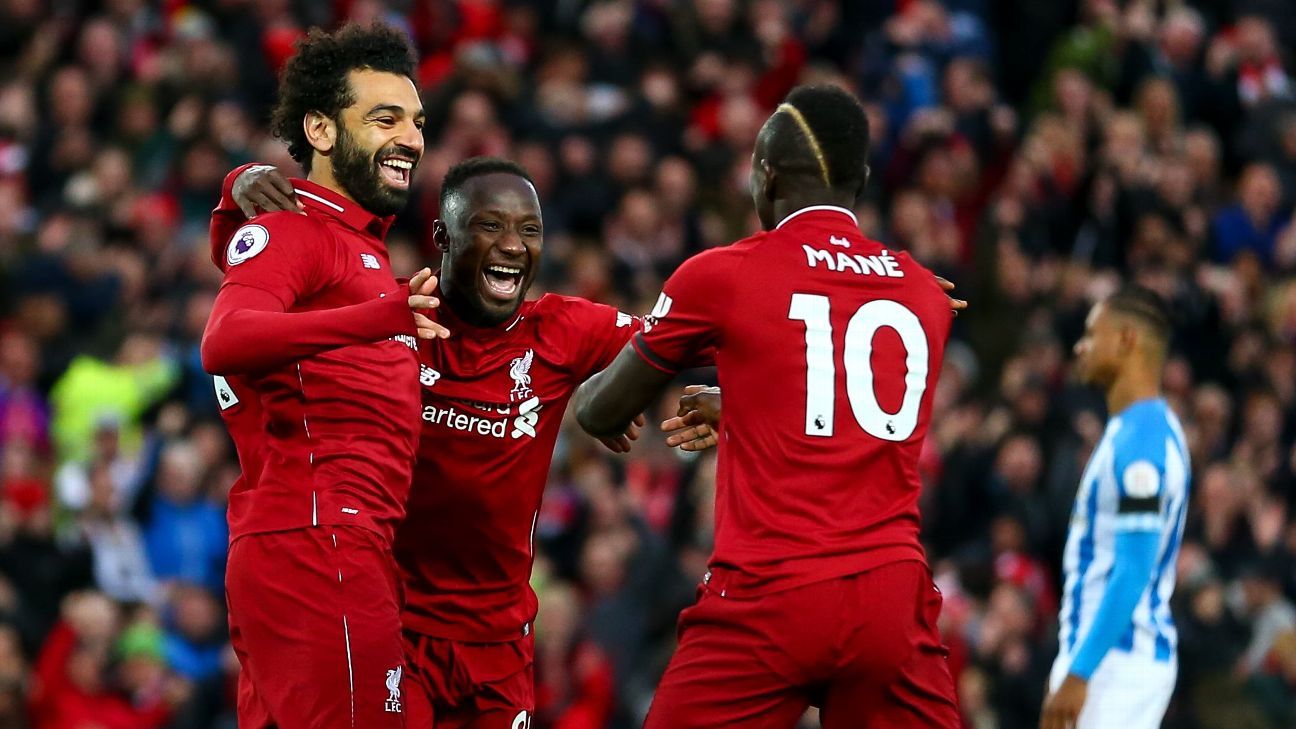 Liverpool returned to the top of the Premier League with a 5-0 demolition of relegated Huddersfield Town at Anfield on Friday night.

Liverpool came into the match looking to reclaim top spot after Manchester City moved into first following a win over Manchester United on Wednesday, and they were in front seconds after the opening whistle when Naby Keita beat Jonas Lossl from a bad giveaway by the Huddersfield defence.

Keita's goal, which came in the 15th second of the match, set a new record for the fastest ever scored by Liverpool in the Premier League.

The hosts doubled their lead just past the 20-minute mark when Sadio Mane headed an Andrew Robertson cross in from the top of the six-yard box to make it 2-0.

Mohamed Salah made it 3-0 right before half-time, lofting a delicate volley over the keeper from a Trent Alexander-Arnold long ball for his league-leading 20th goal of the season. The strike also made Salah the first African-born player to score 20 goals in consecutive seasons in the English top flight.

Daniel Sturridge, in for the rested Roberto Firmino, looked to have made it 4-0 shortly after the restart when he turned home an Alexander-Arnold cross on a counter-attack, but the referee had the flag up for offside on the play.

Liverpool's fourth, and Mane's second, came shortly after though when the Senegal international backtracked to catch up to a Jordan Henderson ball into the box and head it past Lossl to extend the lead.

Jurgen Klopp made two changes after the goal, giving Alex Oxlade-Chamberlain his first senior minutes since suffering a devastating knee injury against Roma in the Champions League one year ago and also bringing on Xherdan Shaqiri for the final 20 minutes.

Oxlade-Chamberlain nearly had a dream start to his return when Salah sprang him in the penalty area only for Lossl to stuff his close-range shot on the line and preserve the 4-0 scoreline, before Mane's effort at a third headed goal came crashing back off the post.

Salah made it five as full-time approached, weaving through the Huddersfield defence to be first to a Robertson square ball in front of goal and tap home to edge in front of teammate Mane in the race for the Golden Boot with 21 and 20 goals, respectively.

Robertson now has 11 assists on the season to become the first Premier League defender with double-digit assists in a season since Antonio Valencia did it for Man United in 2011-12.

The three points puts Liverpool on 91 for the season with two games to play, but they'll need Manchester City to drop points in one of their remaining three matches to have a chance at winning the Premier League for the first time since the 1989-90 season.