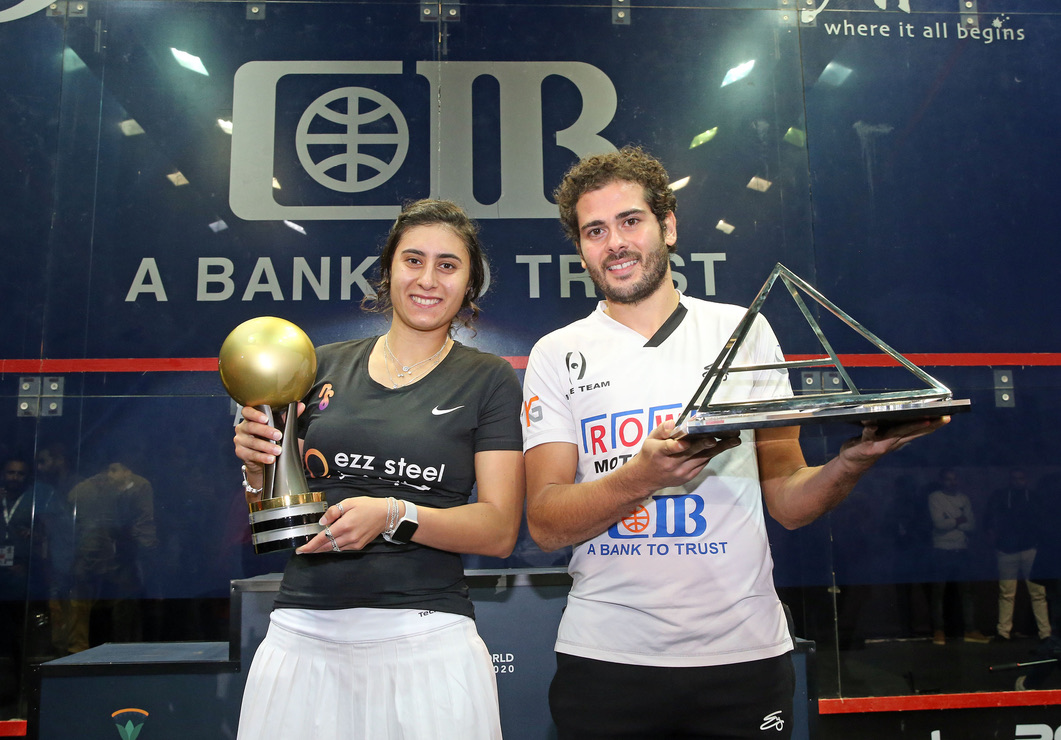 Back from a knee injury, Nour wins world title and $61,000 in prize money
By SEAN REUTHE – Squash Mad Correspondent

El Sherbini is only the fourth – and youngest – female player to win four World Championship trophies, while she is the first person to win a World Championship trophy in front of the Pyramids since Australia’s David Palmer in 2006. Her latest triumph, which comes after an 11-4, 9-11, 11-5, 11-6 win, is made all the more incredible given the fact she is appearing at her first tournament of the season after suffering with a knee injury.

That knee injury has seen El Sherbini fall to World No.4 in this month’s PSA Women’s World Rankings, but she has been in ruthless form throughout the past week in Cairo and didn’t drop a game until the final, where she was meeting El Welily in a third World Championship title decider.

El Welily beat El Sherbini at the 2016 Al Ahram Open as she became the first woman to win a professional squash title in front of the Pyramids, but she looked overawed by the occasion as a number of errors in the opening game handed the lead to her opponent.

She struck back in the second, but from there it was all about El Sherbini as she attacked all areas of the court to complete the win in 41 minutes to capture the biggest title in women’s squash. El Sherbini takes home $61,000 in prize money and also qualifies for the season-ending PSA World Tour Finals, which will take place in June.

“The last couple of months for me have been really hard,” said El Sherbini after the 20th PSA Tour title of her career.

“I didn’t know what I was going to do… but I took the risk and took the decision that I wanted to play this tournament badly, and I wanted to come and try and see how it goes. I was getting better every match and I’m very grateful and happy to be standing here right now.

“I missed playing with all the top players and especially Raneem. She is closest to my heart and it’s very hard to play her mentally and emotionally, but we try to leave the emotions and focus on squash once we get inside the court. I think because today is my birthday, I was making sure not to be sad. I was very relaxed and it took a lot of pressure off thinking about the messages, so it helped me a lot.

“We are very happy to have this tournament back and playing in front of the Pyramids was always a dream of mine. I would really like to thank I-Events, Amr Mansi and his team, and especially CIB for hosting and helping the women’s game get bigger and for giving the women the chance to have a prize money bigger than the men’s.

“It is a big risk and hopefully we deserved that and played matches that were worthy of that. All of the players are very grateful.”

Rivals since the age of seven, Gawad foils Farag in straight games

The women’s World Championship final followed on from the men’s CIB Egyptian Squash Open, PSA Platinum event, where World No.4 Karim Abdel Gawad got the better of World No.1 Ali Farag in a repeat of the men’s 2016 Al Ahram Open final.

Gawad became the first man in a decade to win a trophy in front of the Pyramids when he beat Farag in straight games three years ago, and he matched that 3-0 scoreline to continue his 100 per cent record at the iconic landmark.

Gawad was firing on all cylinders during the 61-minute match and, while Farag stayed in the rallies well, he was unable to fight off a masterclass from Gawad, who captures his 22nd PSA Tour title. He joins El Sherbini in qualifying for the World Tour Finals, while he wins $25,000 in prize money.

“Playing Ali is always very tough for me, he is the World No.1,” said Gawad. “He’s always been my competitor since we were seven years old until now. I know how hard it is. We played in the final [in front of the Pyramids] in 2016 and now we’re playing again in the final here.

“He’s dealing with a lot of hard moments and he is just a champion to be on court with and he fights until the end with this amazing spirit. Best of luck to him and his family.

“I talked a lot with my coaches, Omar Abdel Aziz, Mahmoud Abdel Kader and Ahmed Faragallah. We talked a lot and put together different plans, with the World No.1 it’s very difficult, so you have to have different plans and more than a plan to just win. Winning in three today means a lot to me in such an amazing venue for me and for everyone.”

The next stop on the PSA World Tour will be Doha, Qatar for the 2019-20 PSA Men’s World Championship, which takes place at the Khalifa International Tennis & Squash Complex between November 8-15.