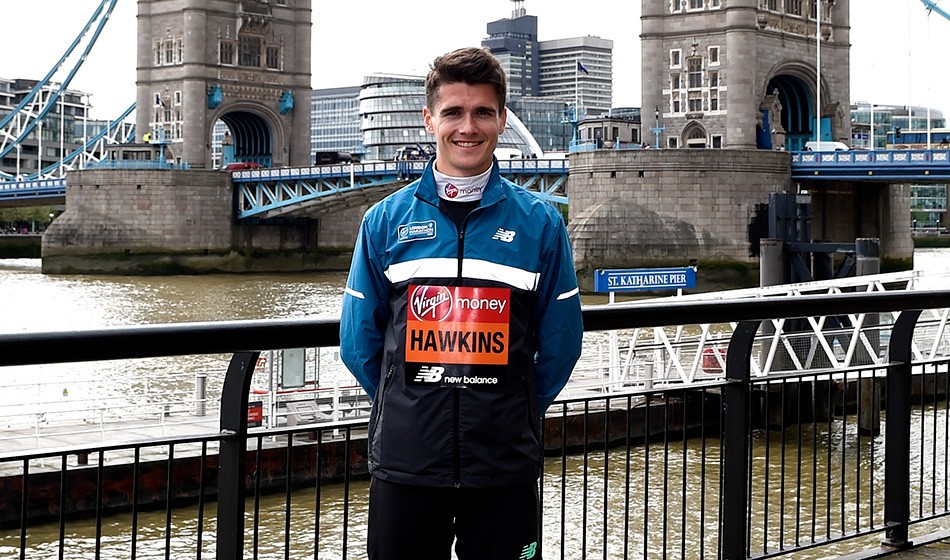 The world fourth-placer has big aims for his marathon comeback, with the Scottish record and Olympic qualification in his sights

All roads lead to Tokyo for Callum Hawkins and his comeback really kicks off at the Virgin Money London Marathon this weekend.

The world fourth-placer has big aims for his marathon return on Sunday, when he will race over 26.2 miles for the first time since his dramatic collapse at the Gold Coast Commonwealth Games.

Hawkins is looking for a performance that will make him stand out to selectors when they come to pick the GB team for next year’s Olympic Games in Japan. Achieving that aim should also secure him a spot for the IAAF World Championships in Doha later this year, as well as a Scottish record.

“I think the plan is 63:30 through half way and then either speed up or hold on – see what it’s like when you get to that point!” says the 26-year-old, who ran his PB of 2:10:17 when finishing just outside the medals at the 2017 world championships in London.

Only one British athlete – European record-holder Mo Farah, who will also be racing in London – has ever broken 2:07 for the marathon. After missing December’s Fukuoka Marathon due to injury, Hawkins was disappointed with his time of 62:50 at last month’s Lisbon Half Marathon but says his subsequent training proves he’s in form.

“Lisbon didn’t go quite as well as I was hoping – I thought I was in a lot better shape,” he says. “But since then I went just as quick and even quicker in two sessions when I was out training in Majorca, so I feel in pretty good shape.

“Every session I did out in Majorca, I was setting PBs for them all.”

A strong run on Sunday is important, he says, to prove he’s back on top after the low of 2018 when he missed out on the Commonwealth title after collapsing when holding a sizeable lead with just 2km to go.

“The comeback from Gold Coast was tough because it was unlike anything I think most people have ever really had from a running point of view,” says Hawkins, who is coached by his father Robert and has also received guidance from former world record-holder Steve Jones out in Boulder, Colorado, in the past.

“With an injury, you know what’s wrong, you can feel the pain, but with Gold Coast, I was feeling good but also not feeling good at the same time. I’d be going out for a run, my legs would be feeling fine, I’d be hitting my normal paces that I’d do for an easy run, but then my heart rate would be 20 or 30 beats higher than it normally would be. It was a bit strange.”

The Scot also revealed how he learned how “one small thing can change everything” but that Gold Coast was “an accumulation of things”.

“I got a bad bug bite the week before and ended up on anti-inflammatories, which knocked my system off a little bit,” he explains. “Maybe I was hot-headed, too, going from a long way out and not taking my foot off the gas.

“I want to get back on to that momentum I had back in 2017 where I was running well pretty much all the time,” adds the 2016 Olympic ninth-placer.

“I want to prove I’m still the athlete I was, and a better athlete.”

And although things have been hard, quitting has never crossed his mind.

“I’m not that kind of person,” he says. “I had two knee surgeries back in 2012 and even then, I never thought I would quit. It never came into my head.”

While Tokyo is Hawkins’ main aim, racing in Doha is part of the journey and the top two British athletes in London this weekend will earn automatic selection for the world championships, provided they also run within the 2:13 qualifying standard.

Athletes seeking Tokyo places will also have the tougher qualifying mark of 2:11:30 in mind, but securing a top-10 place in London, or any of the World Marathon Majors held during the qualification period, will also count as a qualification standard.

“It’s going to be very important for Tokyo,” Hawkins adds as he looks ahead to Sunday’s race. “I think a lot of people are maybe underestimating how much you need to put a good time in.

“I ideally would like to get pre-selected and be able to choose what (else) I get to do next year.

“It’s top 10 or 2:11 but I think you probably need a bit more than that to make sure you’re safe and you get pre-selection.”

Alongside Hawkins and Farah, other British contenders include Wales’ 2:09 man Dewi Griffiths, plus Jonny Mellor and Josh Griffiths.

“Tokyo is the biggest thing because I really think, after my world championships, if everything goes right and especially with the way the conditions are, I do have the chance of winning a medal and that would be the main aim,” Hawkins adds.

“Doha would be a good stepping stone for getting qualification and pre-selection and also to get that monkey off my back that I can run in the heat. And again, it’s another possibility to get a major medal.”