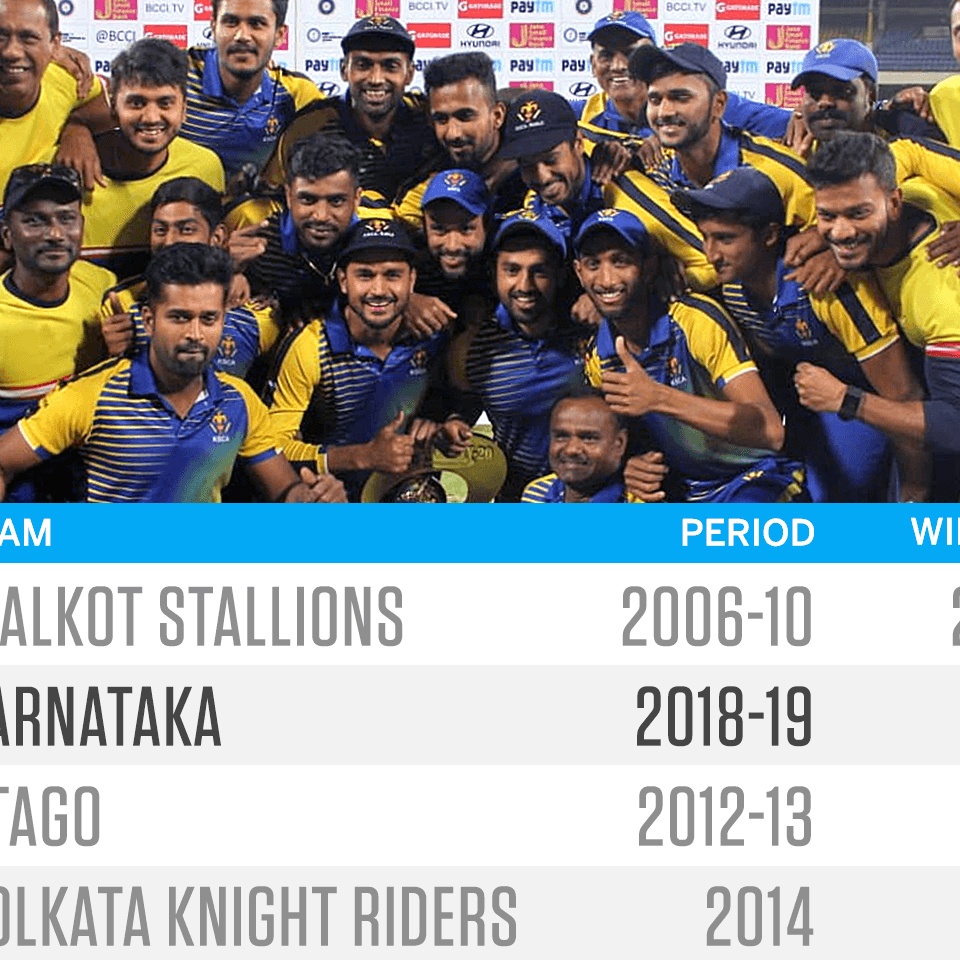 When they beat Uttarakhand by nine wickets in a Syed Mushtaq Ali Trophy 2019 Group A match on Friday, Karnataka not only created an Indian record for most T20 wins in a row, but also moved to second spot in the overall list, joint with Otago. Ahead of them, by a long way, are Sialkot Stallions, who were as close to invincible as a T20 team has ever been, winning 25 games on the trot in Pakistan's National T20 Cup between 2006 and 2010. Here's a look at some of the most impressive winning streaks in the sport.

Long before Shoaib Malik became a sought-after allrounder in T20 leagues around the world, he was a serial match-winner for his regional T20 side in Pakistan: Sialkot Stallions. Stallions' stunning streak comprised five consecutive National T20 Cup titles, a feat unlikely to be bettered given how competitive the circuit has become in modern times. If the low-profile nature of a domestic T20 competition makes it sound like a mean feat, its superlative nature is emphasised by the fact that no other T20 side has come anywhere close in the decade since then.

With a core comprising players who featured in Pakistan's run to the inaugural World T20 final in 2007 - Malik, Imran Nazir, Mohammad Asif and Abdur Rehman - they were clinical in dispatching all comers through that five-year run. A significant part of their winning streak came under Nazir's leadership, when they won all 13 of their games between 2006 and 2009. Stallions' streak made them the first Pakistan side to be invited to the Champions League, in 2012, where they did not make it past the abbreviated qualifying stage. They would go on to win the 2011-12 edition under Malik, but that was the end of their golden age.

It is rare in any T20 competition these days for a side to go through an entire tournament without being beaten, but that's exactly what Karnataka did in the 2018-19 Syed Mushtaq Ali Trophy, India's other domestic T20 competition, away from the glitz and hype of the IPL. While they are blessed with a number of players who have made the step up to India colours, it was Karnataka's youngsters who stepped up through the tournament. The tournament's top run-getter Rohan Kadam and their highest wicket-taker V Koushik were both stars from the local Karnataka Premier League, while big names like Mayank Agarwal, Manish Pandey and Karun Nair stepped up in big games towards the business end.

The 2019-20 edition of the tournament kicked off on Friday, and there was no change in the team's attitude - ruthless and clinical - as they ran out nine-wicket victors in Visakhapatnam. Abhimanyu Mithun and Shreyas Gopal picked up two wickets each to stop Uttarakhand at 132 for 6, and Kadam, continuing his own streak, hit 67 not out and Devdutt Padikkal, another promising youngster, hit 53 not out to seal the chase in 15.4 overs.

Otago, led by the vastly experienced Derek de Boorder, were a cut above the rest of the teams in the six-team competition at home, starting with a 24-run loss to Northern Districts but then recording nine consecutive wins in the league stage and then topping Wellington by four wickets in the final.

That took their streak to ten in a row, which they extended to 15 after reaching India later in 2013 for the Champions League T20 tournament.

They started in the qualifiers. First up, Brendon McCullum hit a 65-ball 83 not out to give them victory against Faisalabad Wolves, then came a Ryan ten Doeschate starrer, as he picked up two wickets and then smashed 64 in 32 balls in a big win over Kandurata Maroons, and the other McCullum, Nathan, then led a brilliant bowling display to give Otago victory over Sunrisers Hyderabad.

All those games were played in Mohali, and Otago made it 14 when they beat Perth Scorchers in Jaipur in the main competition next, Neil Broom's 117 not out in 56 balls leading their cause. It could have been tricky for them had their match against eventual champions Mumbai Indians - before the one against the Scorchers - not been washed out, but they did go on to win the one-over eliminator against Lions to get to 15 after that before going down to Rajasthan Royals.

Kolkata Knight Riders were down and out in IPL 2014 with four points after seven matches when the tournament's most storied winning streak began. Away from their familiar home conditions at Eden Gardens till the 47th game of the tournament, thanks to the 2014 parliamentary elections, they struggled to get going, first in the UAE and then at different makeshift venues around the country. Robin Uthappa, shifted up to the top of the order, smashed his way to the top of the run chart, Morne Morkel and Umesh Yadav led the pace attack, while the spinners - Sunil Narine, Shakib Al Hasan and Piyush Chawla - starred with the ball to revive their winning formula.

If they were unstoppable in the latter stages of the IPL, their continued dominance in the Champions League makes the case for this to be the most comprehensive winning streak in T20 franchise history. They beat the champions of Australia (Perth Scorchers), Pakistan (Lahore Lions) and South Africa's second-best team (Dolphins) on their way to the final, where Chennai Super Kings ended their run at 14 games.