Premiership: Exeter boss wants his side to use anger with Saracens against Bristol 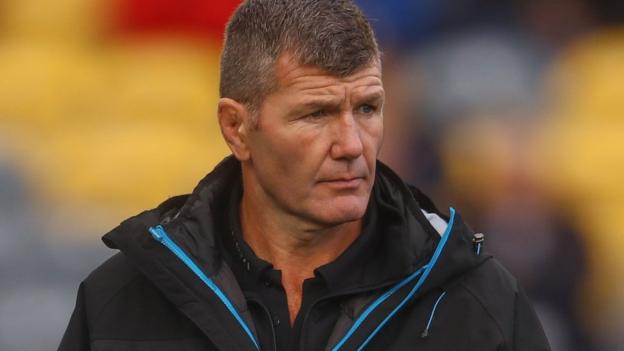 Exeter director of rugby Rob Baxter says his players should channel any anger they have over Saracens breaching salary cap regulations on the pitch.

"If they're angry I don't mind, but what I want to see is how they're prepared to react to it," Baxter said.

"As long as we react to it in a really positive way together and it channels into our performances on the field then I'll be very happy with that," he added to BBC Sport.

Baxter addressed his side for the first time about the Saracens issue on Thursday, having been at the Champions Cup launch in Cardiff on Wednesday, and said most of his squad expected the news to come out at some point.

"What everyone needs to understand and probably some people who aren't involved in the day-to-day games and talking to other players, which all our lads are, it's not something that's been unknown," added Baxter.

"This has been a known thing that hasn't become public, and so for most of our lads it isn't that big an issue, they're just kind of giggling about the fact that everybody knows about it now, that's why I think it's relatively easy to manage."

On the field, Exeter give a start to returning England centre Henry Slade while fellow World Cup players Luke Cowan-Dickie and Jack Nowell are on the bench.

Australia World Cup scrum-half Nic White gets his first start in place of Sam Maunder while Jannes Kirsten comes into the second row in place of Dave Dennis who has a foot injury and Sam Simmonds is recalled at number eight as Dave Ewers misses out.

Bristol Bears make three changes with scrum-half Harry Randall set for a first Premiership start of the season in place of Andy Uren.

Will Hurrell is brought in at centre with Piers O'Conor switching to the wing ahead of Luke Daniels while Harry Thacker returns to the front row.,

Bristol head coach Pat Lam says his side have to be as mistake-free as possible if they are to get a first win at Sandy Park in the top flight.

"You have to be mentally and emotionally invested in the game and you have to work as a team, it's about structure, it's about contact, but working as a team," he told BBC Radio Bristol.

"Last year we played them three times and they were all [decided] within one score and it's the little things.

"You can do things nine times out of 10 perfectly, but it's that one time, that's why I like these sort of games - this is close to internationals, to the real big games where one mistake either way can cost you games, and that's a good challenge for this team."