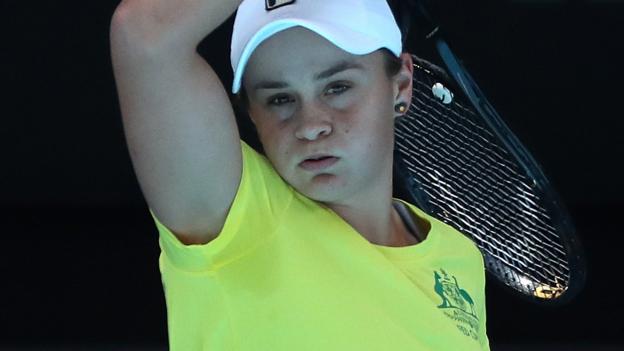 Australia's world number one Ashleigh Barty will play France's Caroline Garcia on the opening day of the Fed Cup final in Perth on Saturday.

Barty, who won her first Grand Slam title at the French Open, is on a 14-match unbeaten streak in the event.

Ajla Tomljanovic will make her debut for Australia in Saturday's first rubber against Kristina Mladenovic, before Garcia and Barty meet.

"Fed Cup is in my calendar before any other tournament," Barty said.

Australia are seeking their first Fed Cup since 1974, while France last won in 2003.

Barty comes into the event on the back of winning the WTA Finals - and claiming its record $4.42m (£3.42m) prize money - in China on Sunday.

The reverse singles will take place on Sunday followed, if necessary, by a deciding doubles rubber.

World number 51 Tomljanovic, who was cleared to play for Australia in October despite having previously represented Croatia, has been preferred for the singles rubbers over Sam Stosur.

Stosur is due to partner Barty in the doubles rubber.

"It is an amazing achievement to be involved in a Fed Cup final, but we don't just want to make the final," Barty said.

"For all of us to be able to say that we are Fed Cup champions would be special."

The format will change to a 12-team event from next year, with the finals taking place in April.

More in this category: « Britain's Dart makes US Open main draw for first time Bryan brothers to retire after 2020 US Open »