Toulouse come back to beat Gloucester in Champions Cup 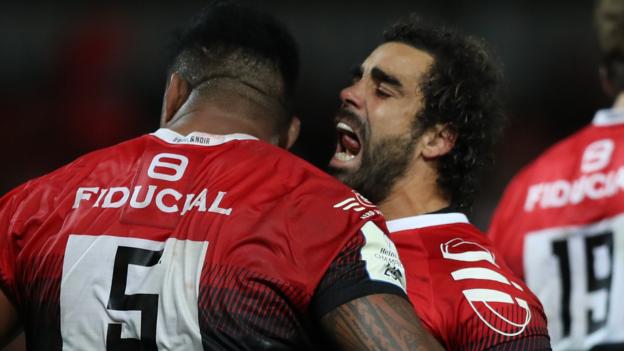 Toulouse kicked three penalties and Sebastien Bezy scored the only try as the visitors scored 16 unanswered points after the break.

Gloucester scrum-half Joe Simpson had given his side a 20-9 lead at half-time after two excellent runaway tries.

The hosts rallied late on but they lost a seventh line-out, five metres out.

Toulouse - who are looking for a record fifth European title - host Connacht in their next match on Saturday, 23 November (13:00 GMT), while Gloucester travel to Montpellier the following day (15:15).

The visitors took the lead in the second minute with a Zack Holmes drop-goal, but the first half belonged to Simpson.

The 31-year-old was making his European debut for the Cherry and Whites after his summer move from Wasps, and he quickly made his mark when he latched onto Matt Banahan's offload from inside his own half to streak clear and step past opposition full-back Thomas Ramos.

Simpson doubled his tally in the 20th minute when he picked up the loose ball in his own 22 before sprinting past the back-pedalling defenders with another demonstration of his blistering speed.

Two Danny Cipriani penalties opened up an 11-point lead at the break as Toulouse lost their shape and failed to take their opportunities against a committed Gloucester defence.

But the competition's joint-most successful side, along with Leinster, played more expansively after the break by throwing the ball around to manipulate the hosts' defence.

Romain Ntamack and Ramos both kicked penalties before scrum-half Bezy dotted down from back of the ruck at close range.

The visitors threw more offloads (15) than Gloucester (nine) and beat double the amount of defenders (36) as they continued to turn the screw, before another Ramos penalty extended the lead to five points.

Gloucester had their chance to claim victory late on but they lost a crucial line-out from five metres out, with just two minutes remaining.

"We missed a couple of chances to score just before half-time but after that our line-out was horrendous and they had over 70% in terms of territory and possession.

"We therefore had no platform to attack from and it was summed up when we lost another line-out in the corner two minutes from the end when we had a great opportunity to score. I'm very proud of the boys' effort but I'm disappointed that we gave them some easy points in the second half."