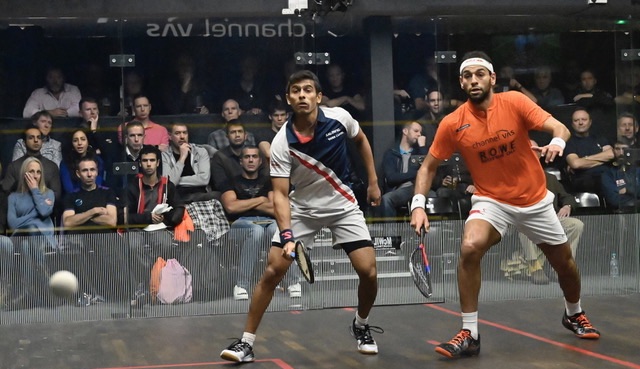 Egypt’s former World No.1 Mohamed ElShorbagy survived a scare against India’s World No.11 Saurav Ghosal to reach the semi-finals of the Channel VAS Championships at St. George’s Hill in a breathtaking five-game battle in Weybridge, England.

Heading into today’s match, ElShorbagy had claimed the last seven victories in a row with the last three all being 3-0 wins. However, Ghosal gave the ‘Beast from Alexandria’ a run for his money throughout the entire 85-minute match with ElShorbagy saving match ball from the clutches of defeat to book a last four place.

“Saurav is a quality player and I think this is the best match we have ever played against each other,” said ElShorbagy afterwards. “We have played so many times on tour and we both go way back. We train together, we’re really good friends and today was the best we have played against each other in the last 12 years. I’m really happy that I was a part of something special.”

ElShorbagy will face World No.8 Mohamed Abouelghar for a place in the final after he overcame compatriot and World No.19 Mazen Hesham in another five-game encounter at the St. George’s Hill Lawn Tennis Club.

Abouelghar played solid squash to open up a 2-0 lead, however, Hesham’s natural flair and unpredictability served him well to get back on level terms. 26-year-old Abouelghar got back to basics in the fifth though to straighten up his play and attack well to claim an 11-8, 11-7, 3-11, 9-11, 11-7 victory in 78 minutes.

“It doesn’t matter how many times we play,” said Abouelghar. “Every time is different, and you never know what he is up to. You still can’t read him even if you play him 100 times.

“I had a good start going 2-0 up and then I think I lost my length a little bit and he took advantage of it with his unbelievable skills and he made it really hard for me to get that momentum back.”

The other semi-final at the PSA World Tour Gold event will see New Zealand’s World No.5 Paul Coll come up against Egypt’s World No.4 Karim Abdel Gawad.

Coll, the only non-Egyptian left in the tournament, had to be at his best to overcome a resilient Joel Makin of Wales in the longest match of the tournament so far.

The last time the two players met was at the start of the season in the final of the Open de France – Nantes, where Coll came away with a 3-0 victory to take his first title of the season. However, Makin showed just how much he had improved throughout the course of the first half of the season as he was in clinical form to take an 11-3 first game.

“I was really struggling mentally today, I was just in and out of concentration and focus which is disappointing from my end,” said Coll afterwards.

“He stepped up today, but I felt like I wasn’t as clinical as I was against him in the final in Nantes. Especially on that court, he picks up a lot and played really well today. I’m just happy that I put in a good fifth set to close it out.

“I really wanted to test myself this week. My goal is to be World No.1 and you have to be consistent all year round, there are no excuses. This week is me testing myself mentally and backing up from a tough week last week.”

Meanwhile, former World No.1 Gawad was in formidable form to comfortably despatch compatriot and World No.10 Marwan ElShorbagy in straight-games in the last match of the evening.

“I had to focus and be on my toes for every single shot to try and not give him a chance of a comeback.”

The semi finals of the Channel VAS Championships take place today (Saturday November 23) at 14:30 local time (GMT) with the action shown live on SquashTV (rest of world), Eurosport Player (Europe only) and the official Facebook page of the PSA World Tour (Indian Subcontinent only).