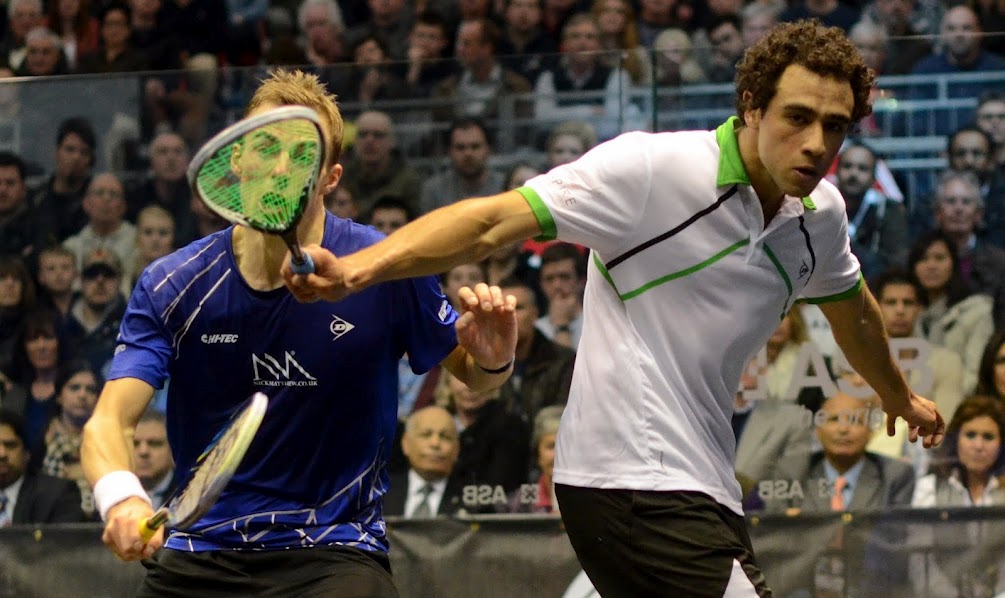 Nick Matthew and Ramy Ashour will renew their long rivalry which goes back more than a decade. They are seen here in action at the North American Open in Richmond, Virginia, in 2011.

The 2020 J.P. Morgan Tournament of Champions returns to Grand Central Terminal for a 23rd year from January 9-17 as the world’s best squash players prepare to descend on New York City for one of the sport’s most iconic events.

The ToC — retitled in 1992 and the sport’s longest continuous pro tournament since 1999 — will once again take place on the state-of-the-art all-glass Squash Engine show court staged in Grand Central’s Vanderbilt Hall.

Hundreds of thousands of passersby will have a chance to witness the sport at its highest level on their commute through Grand Central with the tournament’s unique free front wall viewing, while squash fans can guarantee their seats today by purchasing their tickets at tocsquash.com/tickets.

One of seven PSA World Tour Platinum events in the 2019-2020 season, the ToC will offer equal prize money for men and women with a record total pool of $390,000. The tournament’s longstanding official non-profit beneficiaries are StreetSquash and CitySquash, after-school programs providing urban students with squash instruction, tutoring, mentoring and community service opportunities.

Tournament owner and director John Nimick said: “It is a great pleasure to bring all of the world’s best squash players to the heart of New York City every year and to keep working to make the ToC the best tournament in the world. And our squash fans are fantastic! We have been setting attendance records every year for the past decade and the stands are packed every time a player gets on the show court.”

Last year, Egypt’s Nour El Sherbini made history by becoming the first three-time women’s champion at just 23. The recently-crowned women’s world champion will be in search of a record fourth ToC title this January.

Ali Farag, the men’s world No. 1, will aim to defend his first ToC title as the anticipated men’s top seed. The official entry list and draws will be released in the coming weeks.

The 2020 ToC will feature a new highlight for squash fans in the form of the first-ever RAM Champion Challenge featuring Ramy Ashour—a three-time ToC champion and one of the sport’s greatest players of all-time.

The challenge will feature Ashour’s new scoring system, the RAM scoring system, as the Egyptian takes on another all-time great of the sport, England’s Nick Matthew, Friday January 17 at 5pm.

Off court, the ToC will celebrate its annual Women’s Leadership program benefiting the Women’s Sports Foundation on Tuesday, January 14. During the luncheon, England’s former world No. 2 and past President of the Women’s division of the PSA Jenny Duncalf will be honored with the 2020 J.P. Morgan Women’s Leadership Award at the Yale Club of New York.

Squash fans can take advantage of special sessions at the ToC including Dunlop Kids Day and Ladies Night, the Grand Open party, Thundering Thursday (when all seats in the house are on-sale for low prices), ToC Pong benefiting Big Brothers and Big Sisters of NYC and more.

Tickets are available from tocsquash.com/tickets

Article by CHRIS McCLINTICK (US Squash). Edited by ALAN THATCHER.