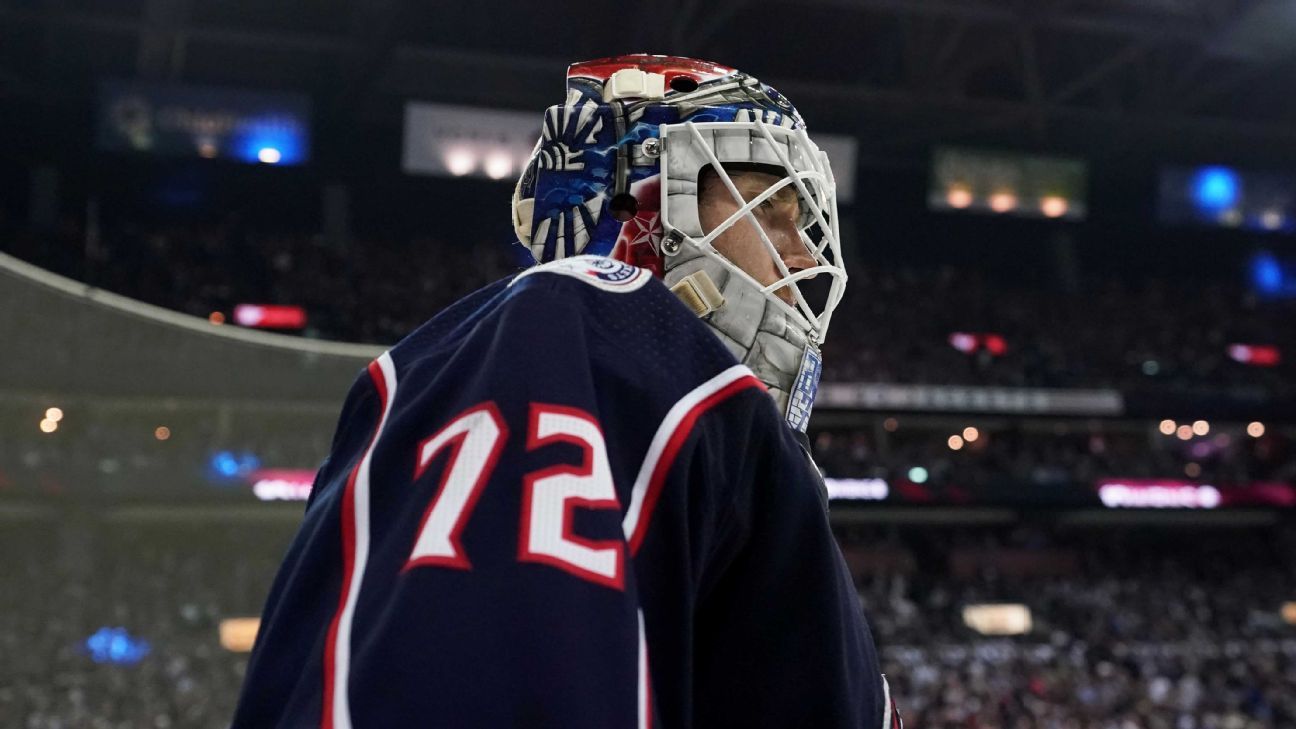 After every win, the team skated over to congratulate the goaltender. Usually guys tapped Bobrovsky on the helmet or shoulder. Foligno usually lurked by the end of the line and greeted Bobrovsky with both arms outstretched.

Besides the one game the next season when Foligno forgot (and heard about it from Bobrovsky after), the two haven't missed a hug since. And over the past six years, Foligno, Bobrovsky and the Blue Jackets organization have been through a lot. There have been highs of regular-season success (and many, many hugs) and lows of early playoff exits -- or no playoffs at all. Until this spring, the Blue Jackets hadn't made it past the first round in their 18 years of existence.

Bobrovsky, too, has wavered. He is a two-time Vezina Trophy winner and unquestionably the greatest goaltender in franchise history. Yet the narrative surrounding Bobrovsky is one of a postseason bust. Between 2011 and 2018, Bobrovsky went 5-14 in the playoffs, with a 3.49 goals-against average and .891 save percentage. According to ESPN Stats & Information, Bobrovsky allowed at least three goals in 79 percent of his postseason appearances in that span, by far the most of any goalie with at least 10 appearances.

This spring, though, it's been all warm and fuzzy in Columbus. Bobrovsky and the Blue Jackets are rewriting the narrative, and it's been one big redemption tour.

"I'm not in his head, but I think it's obvious he was really motivated to have a strong playoffs," says Joonas Korpisalo, Bobrovsky's backup. "It doesn't matter what people think about him, he just wants to work hard for himself and the team. And he works harder and is more of a pro than any goalie I've ever seen."

Bobrovsky has been sensational for Columbus this postseason, going 6-2 with a 2.13 GAA and .933 save percentage. His narrative began shifting in the first-round sweep of the Tampa Bay Lightning. During the regular season, opposing goaltenders posted a .878 save percentage against the Lightning. Bobrovsky's mark? .932.

He seemed even more locked in as the Blue Jackets kept winning; through the first three games of the Boston series, Bobrovsky limited the Bruins' top trio of Brad Marchand, David Pastrnak and Patrice Bergeron to just one goal. The Bruins were left wondering how they could possibly get through.

"The secondary saves he is making are very impressive," Bruins defenseman Brandon Carlo said. "But he's definitely going to crack at some point." (Bobrovsky would allow four goals in Game 4 -- which tied the series 2-2 -- but few, if any, were his fault.)

Bobrovsky's biggest area of improvement is in medium-danger chances. Natural Stat Trick ranked Bobrovsky 34th among goalies in the regular season with a medium-danger save percentage of .892. Through seven games in the playoffs, it was as high as .942.

"I see him every day for the last six years, and it doesn't surprise me," says teammate Boone Jenner. "He's just such a workhorse. Every day he comes in, and I get stoned in practice. This is him locked in."

In many ways, Bobrovsky is the avatar for the Blue Jackets, a team balancing a chip on one shoulder and the immense pressure to win on the other.

Bobrovsky, 30, becomes an unrestricted free agent this summer and wanted to work out a long-term extension with the Blue Jackets earlier in the season. Columbus appreciated Bobrovsky but didn't want to pay him the money he felt he deserved. The sides were so far apart that they cut off talks.

That should weigh on Bobrovsky. Instead, it has brought out his best. As the wins keep piling up, Foligno -- now the team captain -- can't help but notice something different in Bobrovsky.

"The enjoyment factor is different this time," Foligno says. "He's laughing, joking, having a good time. He's loose, you know? He's enjoying this run and just playing the game free, and it's really working for him."