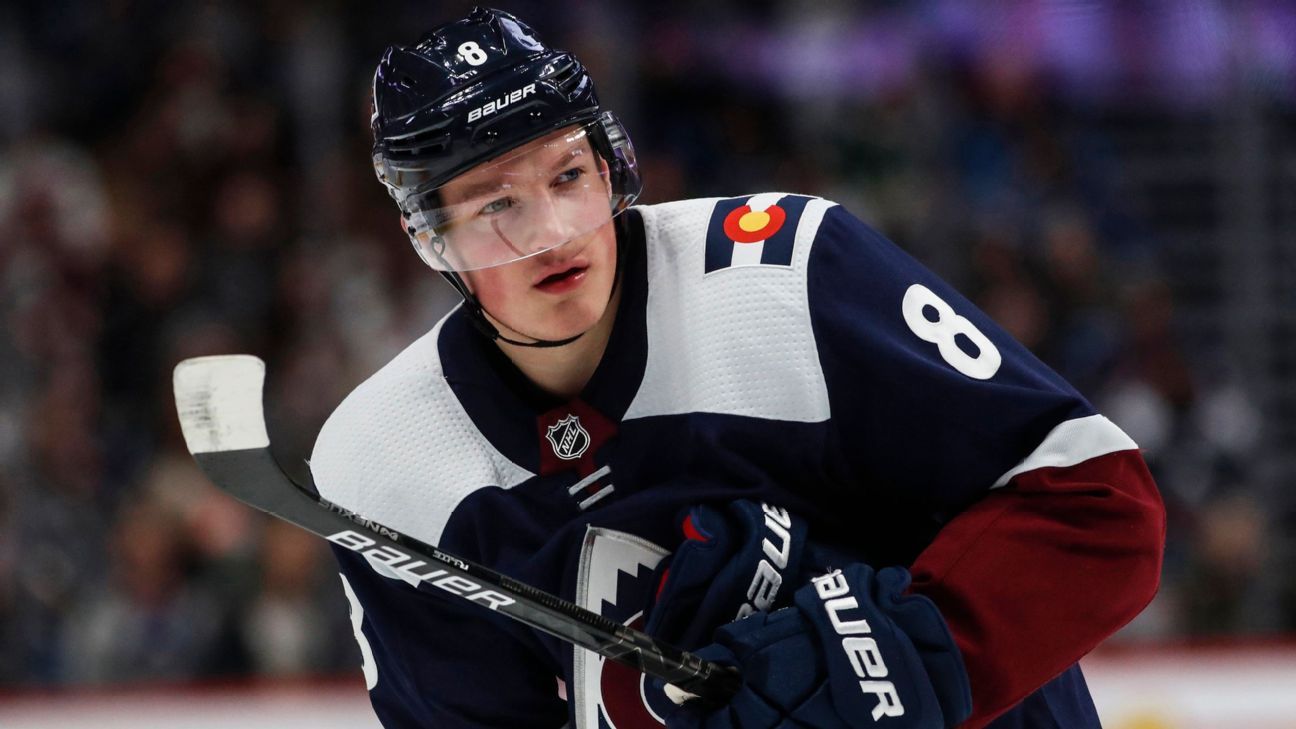 DENVER -- It often seems like the NHL has come too easily for Cale Makar. The Colorado Avalanche defenseman stepped into the NHL playoffs in the middle of a tense, first-round series against the Calgary Flames in April -- two days after he wrapped up his college career -- and immediately scored a goal. In his first 20 regular-season NHL games, while most of his rookie peers were getting their feet wet, Makar averaged more than a point per game. He didn't commit a penalty until his 31st game, and it was a fluky, puck-over-the-glass, delay of game call. Furthermore, the 21-year-old has been handling top-four minutes this season.

As such, it is perhaps comforting to hear a rare example of Makar getting into a pickle. It was before last spring's second-round series against the San Jose Sharks, and the Avs had an off day. Makar had moved in with teammate Matt Calvert and his family to ease the NHL transition. The Calverts set Makar up in their finished basement. "At night, they would lock the door to get downstairs because their [13-month-old] son, Beau, was getting tall enough where he could grab the door handle and try to go down," Makar said. "And the stairs were pretty steep."

When Makar woke up, he went up get breakfast -- and then he realized his door was locked from the outside. "I was like, 'Oh boy,''' he said. "I had to get something to eat."

Makar didn't want to bother Calvert or his wife, Courtney, so the 5-foot-11 rookie spotted a small window in the basement and a small ladder. "We didn't hear him at all," Calvert said. "But he climbed out of the window to get out. That's just so Cale. Too polite, he didn't want to bother us. We always call him green. He's so green."

With 33 points through 37 games -- including four game-winning goals -- Makar has been the front-runner for the Calder Trophy so far this season. It has been an impressive season for rookie blueliners, too, with Vancouver's Quinn Hughes just a step behind Makar. The Avalanche are a team with serious Stanley Cup aspirations, and they view Makar as a serious part of that. Teammates stumped hard for Makar to be voted into the All-Star game as a Last Man In, with the team championing the hashtag: #NateNeedsCale. (Makar lost to David Perron of the host Blues).

"He did such a good job last playoffs, I guess that's why they traded Tyson [Barrie] this summer," defenseman Sam Girard said of the trade that brought center Nazem Kadri to the Avs. "They knew Cale would be able to make an impact in the NHL right away as a top-four defenseman."

Makar missed eight games last month due to an upper-body injury after he absorbed a big hit from Boston's Brad Marchand. The Avs went 4-3-1 in his absence. "When he was hurt for eight games, it hurt us a ton," leading scorer Nathan MacKinnon said. "Now that he's back, it's definitely changed our team for the better."

Makar has won over plenty of fans in Denver because of his humility. "He's that good that he could have that kind of arrogance to him, but he's really not that guy," Kadri said. "He's a good Western [Canadian] kid. He doesn't need much to make him happy."

Added MacKinnon: "There are so many things that are amazing about him. He's such a freak athlete. He's so fast and powerful. I think he's one of the best D-men in the league already. But he's got this quiet confidence about him."

Makar is also pure -- perhaps to a fault. Teammates say they've never heard him chirp on the ice, and they quash the notion of that ever happening. "Cale chirp?" captain Gabriel Landeskog said. "No way."

"As a rookie, I don't think you have that privilege yet," Kadri said. "But I don't think I ever see him being that guy." (Makar's take: "I don't think I'm quick enough to come up with anything good to say.")

Describing his interests outside the rink, Makar said: "I like video games a little. I grocery shop. I read." (He calls Costco "an unbelievable store," and he's currently reading Nicklas Lidstrom's book, which his dad gave him for Christmas).

When I asked NHL players this fall about their most recent splurges, Makar responded that he recently treated himself to ... a slurpee. He has become a yes man to almost all external asks. He voiced a welcome message that airs on the train to baggage claim at Denver International Airport:

Come to Denver. Get greeted by Cale Makar on the train to baggage claim.

Again. He was in college a year ago and now he's already one of the faces of the #Avs. pic.twitter.com/2KzUJ6el1R

He starred in a video on the Avalanche Twitter feed instructing fans how to make Cale (or kale) smoothies and stole the show in the NHL's holiday video by committing to -- and nailing -- a very low note to conclude a group rendition of Jingle Bells.

Happy Holidays from the NHL! pic.twitter.com/QPPgf1zBCC

"I just roll with it and have fun with whatever anybody needs," Makar said. "I'm an open book for the most part. I just try to be polite about it. Other than singing. I won't be singing in public ever again. That was my one appearance."

The amenable attitude is something Makar adopted from his childhood idol, Jarome Iginla. Makar grew up a 10-minute drive from downtown Calgary. His family shared Flames season tickets with six others, so the Makars attended a handful of games per season. Makar would battle with his younger brother, Taylor, over who would get to go to games with their dad.

"My dad always told me to pay attention to how Jarome Iginla handled himself in public and in the community," Makar said. "He was a role model for me. I wanted to be like him. Everyone in Calgary loved Iginla. He could do nothing wrong."

That's exactly how Makar has begun his NHL career. When people ask about the frenzied few days last spring when Makar won the Hobey Baker, lost in the Frozen Four with the UMass Minutemen and joined the Avalanche for Game 3 of their first-round playoff series, Makar says, "I blacked out."

"There's no other way to describe it. The events that took place in those 48 hours were just crazy," he said. "It was probably good that I played that game because if I had more time, I would have overthought a few different things."

If Makar was nervous that week, he sure didn't show it. MacKinnon remembers going up to Makar before the first game. "How are you feeling, man?" MacKinnon asked.

Makar is just as cool on the ice.

"If it looks like he's in trouble, he just takes two strides, and he's out of it," Landeskog said. "Obviously, he has tremendous patience and poise with the puck."

Asked if he has ever seen anyone adjust to the NHL so easily, Landeskog said, "I mean, Nate had three points in his first NHL game. But the impressive part is doing it in the playoffs. Cale didn't know anything, really. He just stepped in and completely took over. I've never seen anything like that."

What excites the Avalanche most: Makar is just scratching the surface. "Matt Nieto and I are always talking about the younger players," Calvert said. "And I remember 10 games in, we were like, I don't think he's playing half as well as he could -- and yet he's still averaging a point a game."

There are, however, some things that haven't been easy for Makar. One of them is adjusting to the new attention. Recently Makar was at his beloved Costco with his mom, and he said he was recognized in every aisle. "That was weird," he said.

In December, the Avalanche had an off day in Boston, and UMass invited Makar to return to campus as they raised a banner honoring his Hobey Baker Award.

"It made me a little bit uncomfortable, to be honest with you," he said. "I'm not a guy that looks for attention like that. It was kind of weird for me to stand there and have all those people look at you. I was really honored, but it's crazy to think just one year ago that I was playing there."

In other words, a lot has changed -- and fast.