From Kingston to Karachi: England's ten greatest away wins 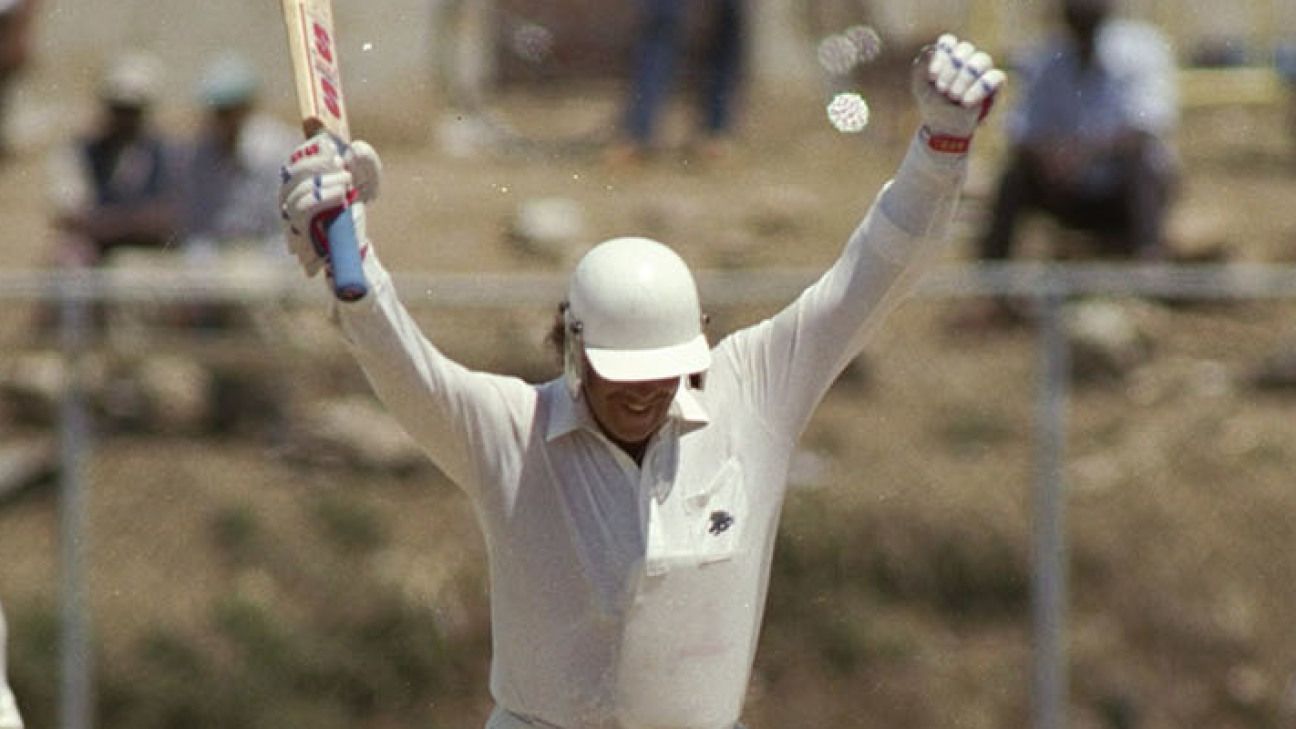 As England take the field for their 500th overseas Test at Port Elizabeth (which was, coincidentally, the scene of their first in South Africa in 1899), ESPNcricinfo takes a look back at ten of their finest away wins, out of a current tally of 149.

The gold standard of England's overseas Test wins. It wasn't simply that this result was unexpected, it was beyond the bounds of possibility, as wild a sporting upset as you could wish to encounter. England's record against West Indies going into the first Test of 1990 was played 15, lost 14, drawn 1. They hadn't won a Test against them since 1974, and they arrived in the Caribbean off the back of a 4-0 Ashes drubbing with a squad that had been ravaged by Mike Gatting's rebel tour of South Africa. But in Graham Gooch's first outing as full-time England captain, he inspired a rag-tag army to surpass themselves. Angus Fraser claimed 5 for 28 to skittle West Indies for 164; Allan Lamb produced a majestic hundred to ensure that advantage didn't go to waste. Despite an anxious wait for rain to clear in the closing stages, Wayne Larkins sealed an incomprehensible win by nine wickets.

Only three teams in history have won a Test match after following on, and Australia have been on the receiving end on each occasion - most recently at Headingley in 1981 and Kolkata 20 years later, but also way back in the mists of time on Andrew Stoddart's tour of Australia in 1894-95, when Wisden declared the first Test at Sydney to be "probably the most sensational match ever played either in Australia or in England". Australia recovered from 21 for 3 to rack up a massive 586, with Syd Gregory's ninth-wicket stand of 154 with Jack Blackham remaining an Australia record to this day, before chiselling England out for 325 by the close of day three. The follow-on proved arduous for the Aussies as Albert Ward's 117 kept them in the field for 181 further overs, but a target of 177 ought to have been achievable. However, heavy overnight rain coupled with a steaming hot sixth day gave the pitch an attack of the vapours, and Bobby Peel required no second invitation - despite apparently needing to be stuck under a cold shower to ease the effect of his own overnight watering. "Give me the ball, Mr Stoddart, and I'll get t'boogers out before loonch!" he is said to have declared. He wasn't wrong. Australia collapsed from 130 for 2 to 166 all out, losing by ten runs with two minutes of the session remaining.

The events in Barbados in April 1994 are proof, if nothing else, that long before the World Test Championship was introduced to provide officially sanctioned "context", each individual Test match counted for something irrespective of the series scoreline. At 3-0 down with two to play, England were dead and buried on their 1994 tour. Their one chance at salvation, in the previous Test in Trinidad, had been scorched by Curtly Ambrose in their 46-all-out debacle, and after being routed by a West Indies Board XI in a practice match in Grenada, the prospect of a third blackwash in ten years was a clear and present danger - especially as they headed for Fortress Bridgetown, a venue where West Indies hadn't lost since 1935. But then the miracle started taking shape. Alec Stewart and Mike Atherton added 171 for England's first wicket, with Stewart going on to the first of his twin hundreds, before Fraser pounded through West Indies' defences with a career-best 8 for 75. It couldn't change what had gone before, but in a decade featuring just nine away wins, this was right up there with the best.

Andy Flower, rarely one to let his guard slip, declared this to be nigh on the "perfect" England win, and despite the hyperbole, it's hard to deny he had a point. This was a masterful initiative-seizing victory, a strike right at the heart of a rattled Australia team who had seen a routine win in the first Test at Brisbane quashed by the small matter of England's second innings: 517 for 1. And Australia's response to that indignity was calamity: a scoreline of 2 for 3 on the first morning as James Anderson snaked his way through the top order before Alastair Cook continued where he'd left off with another dry-as-dust 148. Enter Kevin Pietersen, who slapped a sun-baked attack for a punitive double-hundred, before Graeme Swann took his cue on the final day with five match-sealing wickets. To make it all the more perfect, the outfield was drenched by a thunderstorm barely half an hour after the finish.

It may all have ended in tears and recrimination, but like ABBA or Fleetwood Mac, Cook and Pietersen sure made some beautiful music when the mood took them. Two years after Adelaide, they reprised the same rhythm with another chalk-and-cheese alliance, and this time the impact on their opponents was even more stark. India had eased to victory in the opening Test in Ahmedabad, though not before Cook's 176 in the second innings had shown his team the requisite bottle for Indian conditions. But when he repeated that dose in the first innings at the Wankhede, this time Pietersen was waiting to turn on the style. Newly "reintegrated" to the England team after the textgate row of the summer, he disintegrated India's resistance with an astonishing onslaught - 186 from 233 balls included a firestorm of boundaries against spinners R Ashwin and Pragyan Ojha. And talking of spinners, who should be waiting to ice England's cake? Their own spin twins, Swann and Monty Panesar - the perfect combo for the conditions - who wrapped up the contest with 19 wickets between them.

Blows to the head aren't generally advised in this day and age, but one of the most famous blows of all time is widely acknowledged as the catalyst for one of the great series turnarounds. Two years after winning the Ashes back on home soil for the first time in 19 years, Len Hutton's prospects of retention weren't looking too promising after an innings thumping in the opening match of the 1954-55 series, in Brisbane. His key fast bowler, Frank Tyson, claimed 1 for 160 in that match, and his tour took another turn for the worse when he was knocked out by a Ray Lindwall bouncer in the second Test at Sydney. But from that moment on, the joke was on Australia. "I was a little cranky," Tyson later admitted, as he blew through Australia with six second-innings wickets, to turn a 74-run deficit into a famous 38-run win. Two weeks later in Melbourne, he was in an even crankier mood - nothing could survive his second-innings 7 for 27, as Australia were wrecked for 111.

Okay, so the quality of the contest was a notch below the usual standards - Australia really were at a low ebb in this post-Lillee, pre-Warne era. But who could failed to be swayed by the optics? Like the cackle of Emperor Palpatine in the trailer for the latest Star Wars, the first Test at Brisbane heralded the rise of an Australian nemesis whose best endeavours had been buried for so long, you could only assume he was finished. But no! Back he strode to his throne of Ashes - revoltingly mulleted and broader at the midriff than in his heyday, but still possessed of an eye like a dead trout. Merv Hughes bore the brunt of Ian Botham's 14th and final Test century, as England seized an initiative that carried them to glory with a Test to spare. Can't bat, can't bowl, can't field indeed...

England's tour of South Africa in 2004-05 was a bruising, shattering bunfight - ideal preparation, in hindsight, for the ultimate test that awaited that summer against Australia, but at the time it seemed likely that the two teams would punch themselves to exhaustion. England might have been 2-0 up after two, but for South Africa's epic rearguard at Durban, and instead it was 1-1 with two to play after a Jacques Kallis masterclass had set up an innings rout in Cape Town. Cue the craziest contest of the lot at the Wanderers, where Marcus Trescothick transformed a faltering third innings with a blistering 180 - including 58 priceless runs for the tenth wicket with Steve Harmison. The only trouble was... who was left to take the wickets? Harmison the bowler was on his last legs, and the rookie Anderson was out of his depth at this early stage of his career. Up stepped the shop steward, Matthew Hoggard, with an inspirational 7 for 61, including a first-ball outswinger to Kallis that has to rank among the greatest deliveries in English Test history.

"Stay in the game at all costs!" Nasser Hussain's exhortation was writ large across this magnificent heist, as his team of honest toilers gained their rewards at the end of an exhausting series dominated by slow and at times thoroughly tedious batting. But with the series deadlocked at 0-0 with just minutes left to play of the penultimate evening in Karachi, Ashley Giles unpicked the lock with the vital scalp of Inzamam-ul-Haq and England sensed their moment to strike. Pakistan lost their final seven wickets in just under 30 overs on the final day to leave England with a race against time - 176 runs before nightfall. Pakistan's captain, Moin Khan, mocked their optimism, knowing full well that the encroaching winter darkness would save them before long, but umpire Steve Bucknor refused to give in to his time-wasting and insisted that play had to go on. Graham Thorpe anchored the chase with a masterful 64, as victory was sealed with an inside edge past the stumps, and through a Pakistan infield that could no longer see where the ball was going.

In a week when debate has raged about the relative merits of England's great allrounders, here's a compelling submission from the forgotten master, Tony Greig. His decision to join World Series Cricket in 1977 - and the concurrent rise of Botham - mean that his derring-do is too easily overlooked, but when his game was on song he was every bit the colossus. Needing victory to square the series in the final match of their 1974 tour of the Caribbean, Greig used every inch of his 6ft 6in frame to unleash his lesser-spotted offspin to devastating effect. He racked up 8 for 86 to restrict West Indies to a first-innings lead of 38, then added a further 5 for 70 in the second innings as the hosts, chasing 226, collapsed from 63 for 0 to 199 all out. It was the end of the road for Garry Sobers and Rohan Kanhai, two Caribbean greats, who never played again. But England wouldn't win again for another 16 years, as Clive Lloyd and his mean machine prepared to roll into the region …

More in this category: « Experimenting India's bid to salvage series against fully-armed Australia Mominul Haque set to move to No. 4 in Mushfiqur Rahim's absence - Russell Domingo »