Pavelski to travel, but return still up in air 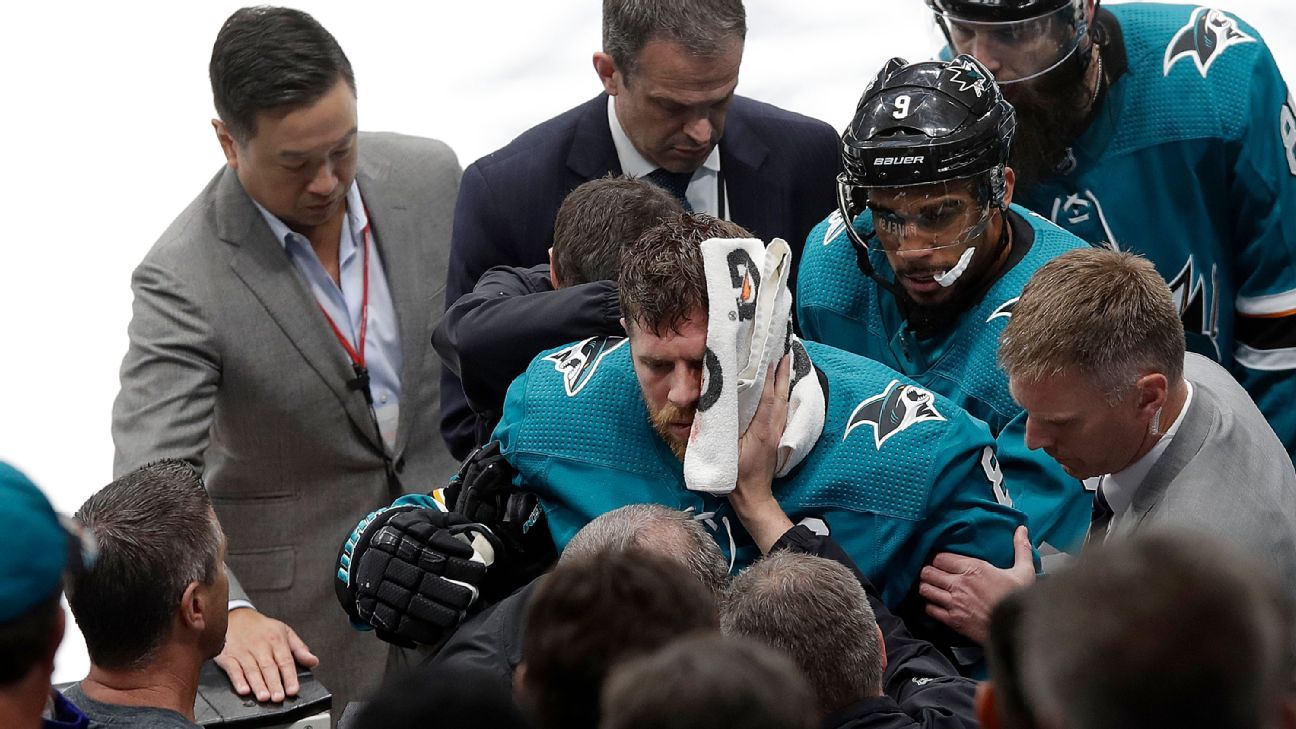 SAN JOSE -- San Jose Sharks captain Joe Pavelski said he'll accompany the team to Denver for Game 6 against the Colorado Avalanche, but there's no timetable for his return to the lineup after a horrific head injury in Game 7 against the Vegas Golden Knights on April 23.

Pavelski made a surprise appearance during the Sharks' Game 5 win on Saturday night, waving to the crowd in the third period to thunderous applause as San Jose skated to a 3-2 series lead.

"It was exciting to be out there. Once you're out there and you experience that, you realize how much you miss it," Pavelski said Sunday.

Sharks coach Peter DeBoer said it was a "give-you-a-chill type moment" before quipping, "I think our coaching staff will give him the same kind of ovation when we find out he's back."

The Sharks have been careful with Pavelski. He's skated on his own for the past few days, including a vigorous training session after practice on Saturday. His line with Logan Couture has played well in his absence, with Gustav Nyquist moving up to help the line take on Colorado's top unit with Nathan MacKinnon. But given that Pavelski had 38 goals and 26 assists in 75 regular-season games and is one of the Sharks' most effective playoff performers, they would love nothing more than to have him back on the ice. In fact, they've made his return a rallying cry in the playoffs.

"We're trying to win as many games as we can so we can see him back out on the ice again," Joe Thornton said earlier this round.

Pavelski's comments on Sunday were the first he made since his Game 7 injury.

Midway through the third period against Vegas, Pavelski's head hit the ice following a cross-check to the chest by Knights center Cody Eakin and a collision with Vegas forward Paul Stastny. Pavelski was motionless for a moment, bleeding profusely through the top of his helmet.

Pavelski said that the injury was a "pressure cut" from his head hitting the ice and that his helmet did its job to protect him.

Brent Burns and other Sharks players surrounded their captain, calling for the training staff to come out. Pavelski eventually sat up and gingerly skated to the bench, with Thornton pressing a towel against his head.

"I remember taking the faceoff, and I don't really remember a whole lot after," Pavelski said. "Getting pushed, and all that stuff. The first thing that kind of came back was being helped off. Jumbo [Thornton] was right there, just calming me down. He just was saying, 'We got you, we got you. You're going to be all right.'"

Pavelski said he wasn't panicked, although Thornton's reaction signaled the severity of the situation. He was still coming to his senses as he left the ice.

"Then getting into the training room," he said. "Getting the first staple in my head was probably when the first goal horn went off. I was kinda like, 'What was that?' And they told me we scored."

The Sharks received a five-minute major power play after Pavelski's injury, scoring four goals to take a 4-3 lead. They later won the game in overtime to eliminate the Knights. The NHL subsequently apologized to Vegas for the officiating mistake, which Pavelski acknowledged on Sunday.

"For me ... I've played with some of those guys [on Vegas] for a lot of years. I have no issues with that play. Was it a five-minute major? No. Was I happy they called it that way? Heck yeah," he said. "But from that moment on, what the guys did after that in scoring four goals, it was a special night. One of the tougher nights. But one of the better nights."

Pavelski said that night was difficult, as he felt the impact from what the Sharks inferred was a concussion. He had headaches that continued to the next day. His light sensitivity was decent, but Pavelski said looking at his phone for too long would adversely affect him.

As the Sharks look to close out the Avalanche, he's skating again with regularity. The team has said he's close to returning. Pavelski agrees.

"You'd like to think you can play tomorrow. But we're going to be smart. Definitely getting closer," he said.