Laura Massaro to retire at the end of this season 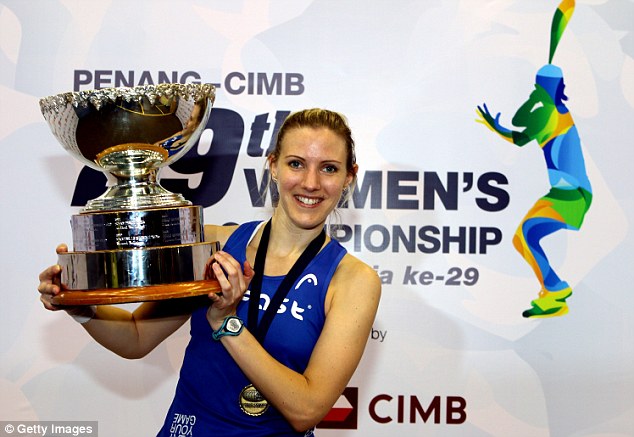 England’s former world champion Laura Massaro has announced that she will retire from professional squash at the end of the 2018-19 season.

Preston-based Massaro, 35, is the most successful female English player of the modern era and, in 2014, became the first Englishwoman in 15 years to lift the PSA World Championship title.

She also won the historic British Open twice, ending a 22-year wait for a female English player in 2013, while she captured her second British Open crown in 2017, becoming the first Englishwoman since 1951 to win squash’s longest-running tournament on two occasions.

The only Englishwoman to win both the World Championship and British Open titles – trophies which she held at the same time – Massaro also topped the PSA Women’s World Rankings for four months in 2016, making her one of just three female English players to hold the No.1 ranking.

A tough, uncompromising player, Massaro has always made life difficult for her opponents. Playing a brand of hard, high-paced, pressure squash, she has thrived on the adrenalin of big-match occasions where her discipline and dedication have shone through.

Massaro has been ever-present in the world’s top 10 since May 2008 and, since turning professional in 2000, has won 23 PSA Tour titles from 43 finals, with her most recent trophy win coming at the Monte Carlo Classic last December, where she beat World No.9 Tesni Evans in the final.

Massaro has played 543 matches on the PSA Tour, winning 371 of them, and her final two PSA tournaments will be the Manchester Open – which begins tomorrow – and the Allam British Open as she brings the curtain down on a glittering career.

Away from the PSA Tour, Massaro also has three Commonwealth Games silver medals and four British Nationals titles to her name, while she led England to the Women’s World Team Championships crown in 2014 after four runner-up finishes at the tournament.

“I’ve been really lucky to have a healthy body, a really long career, and it’s probably been more that I’ve ever expected in terms of titles and my achievements in the game,” Massaro said.

“There’s no point in trying to chase the world’s best when my best level of squash is probably behind me, and it’s going to be very hard to get that back. I’ve always gone after being the best in the world and winning titles. But I think it’s time to hang up the racket, give a little bit back now and watch these amazing youngsters do their thing on court.

“I’m hugely proud of what I achieved, I always wanted to be successful, I wanted to hang up my racket feeling that I couldn’t have achieved any more in the game than I have, whether it was titles or the level of play.

“That’s down to everyone that’s helped me in my career. There are too many people to mention, but DP [David Pearson] and Danny [husband Massaro] go without saying. I owe my level of squash to them, along with all the other coaches who have helped me on my way.

“They, along with the physios, fasciotherapists, Caroline, Jade, Vicky and Sylvan, have helped my movement be so efficient and given me my longevity, along with Mark Campbell, who has given me the strength and fitness to maintain my level. Without all of them, my career wouldn’t have been what it has been.

“I also want to say thank you to my family and friends who have been there supporting me in the ups and downs of my career since I was a young junior player.”

PSA Chief Executive Alex Gough said: “Laura has always been a consummate professional. Her success on the tour has been testament to her hard-work and unwavering mental strength.

“Laura has been an incredible role model for aspiring squash players, and everyone at the PSA wishes her well for the future.”

Massaro will appear as the No.5 and No.8 seed at this month’s Manchester Open and British Open, respectively.

The Manchester Open takes place between May 9-13 at the National Squash Centre, while the British Open will be held between May 20-26 at the University of Hull’s new sports complex.

FOOTNOTE: What’s your favourite Laura Massaro match? Readers are invited to comment below.