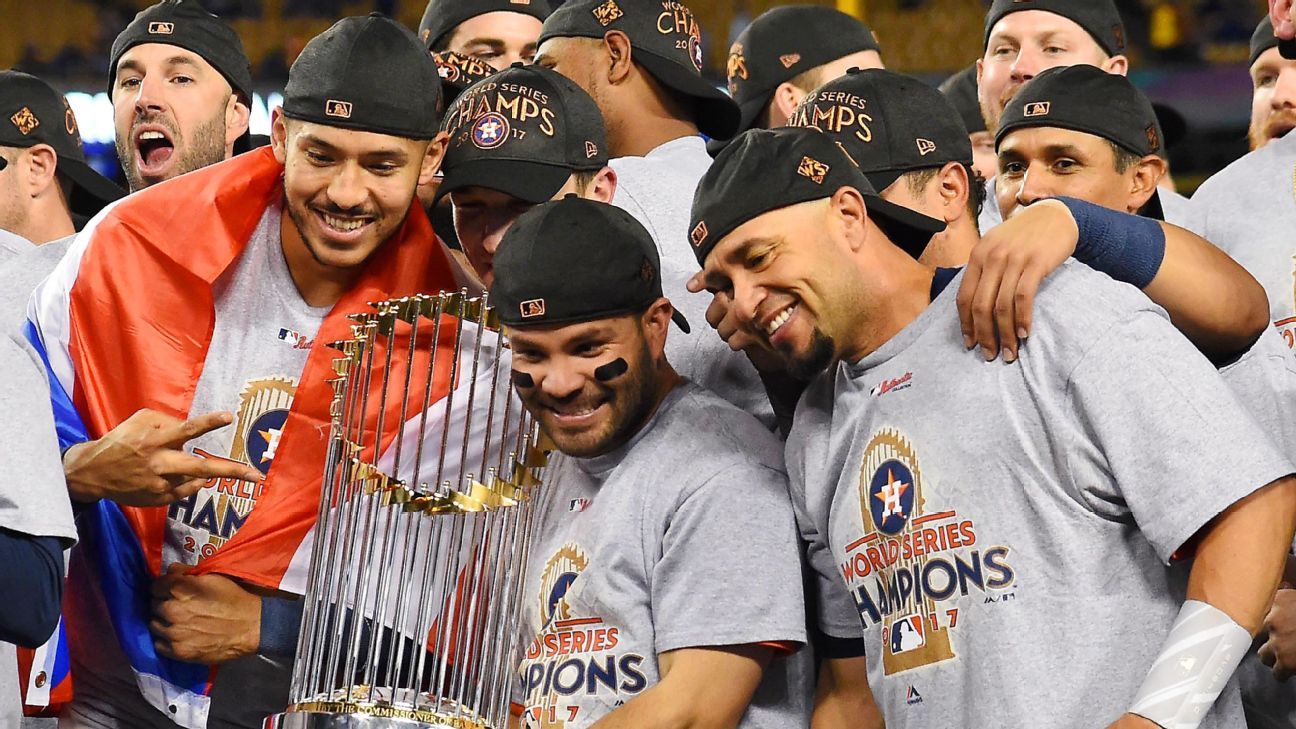 TAMPA Fla. -- Aaron Judge did not mince words when addressing the Houston Astros' sign-stealing scandal, saying the team should vacate the title and that players should have been punished.

"I just don't think it holds any value with me. You cheated and you didn't earn it," Judge said of the 2017 World Series championship won by the Astros. "It wasn't earned the way of playing the game right and fighting to the end. The biggest thing about competition is laying it all out on the line, and whoever's the better player, better person, comes out on top. And to know that another team had an advantage -- nothing that you can really guard against -- I just don't feel like that's earned."

Judge confirmed that he deleted a social media post congratulating Altuve not long after learning about the result of the MLB investigation, which backed up claims made by Mike Fiers to The Athletic back in November. The investigation led by MLB confirmed the Astros had cheated by using a camera-based, sign-stealing system during their 2017 World Series-winning regular season and playoffs, and during part of the 2018 regular season.

"I think I took it down right when, I think, the story broke out -- right when, I think, Mike Fiers came out and stated that this is what was going on in '17. Once I heard that, I [was] just -- just sick to my stomach to find out," Judge said. "I had a lot of respect for those guys and what they did, especially what they did for the city of Houston and that whole organization. And then to find out that it wasn't earned, they cheated -- that didn't sit well with me, and I just didn't feel like the post that I did really meant the same anymore."

Judge also said he believed the Astros' sign-stealing had a direct impact on the 2017 American League Championship Series, which the Yankees lost to Houston in seven games. And even though the investigation detailed that the sign-stealing did not take place in 2019, the 27-year-old outfielder believes it continued.

"From what the report stated, they cheated in '17 and '18. That affected a lot of games. No matter what anybody says, that impacts the game -- knowing what's coming. That's more people on base, you're getting more walks, you're getting more hits; comes to the plate with more opportunities with guys on base. So it definitely impacted the results of that series. And they can say that we didn't score runs, we didn't do this and that, but it affected the game big-time," Judge said.

Judge also specified that he disagreed with the fact that the players themselves did not receive any punishment from Major League Baseball commissioner Rob Manfred because they were granted immunity during the investigation.

"I really wasn't a fan of the punishment; I thought that was a little weak for a player-driven scheme, that no players involved got any punishments," Judge said. "When it comes down to a player-driven scheme, I feel like the players involved need to be punished. If I go out there and cheat the game -- I think [Yu] Darvish was the one that said, 'If you're playing in the Olympics, you win a gold medal and you find out you cheated, you don't get to keep that medal.'"

The Yankees slugger is currently nursing what manager Aaron Boone called "crankiness" and a "little soreness" in his right shoulder. Judge, who is expected to miss at least the first Yankees spring training game on Feb. 22, did not take batting practice for the first full day workouts but did participate in most fielding drills.

Boone specified that even though the Yankees shut down Judge from hitting and throwing this week, an MRI and a series of tests did not reveal any injury. Judge, who missed 50 games last year due to an oblique injury and had a sliding catch back in September that jammed his right shoulder and kept him out of the lineup, dismissed it as a minor issue.

"It probably started a couple weeks ago, when I first got down here," Judge said. "I've been hitting since early November, and working out since early November. Once I got down here, hit on the field, hitting outside -- I just felt a little soreness up in the shoulder. Nothing alarming. So I said, hey, we got plenty of time going into spring training; let's take it slow these next couple days, make sure everything's right, and then kinda go from there."