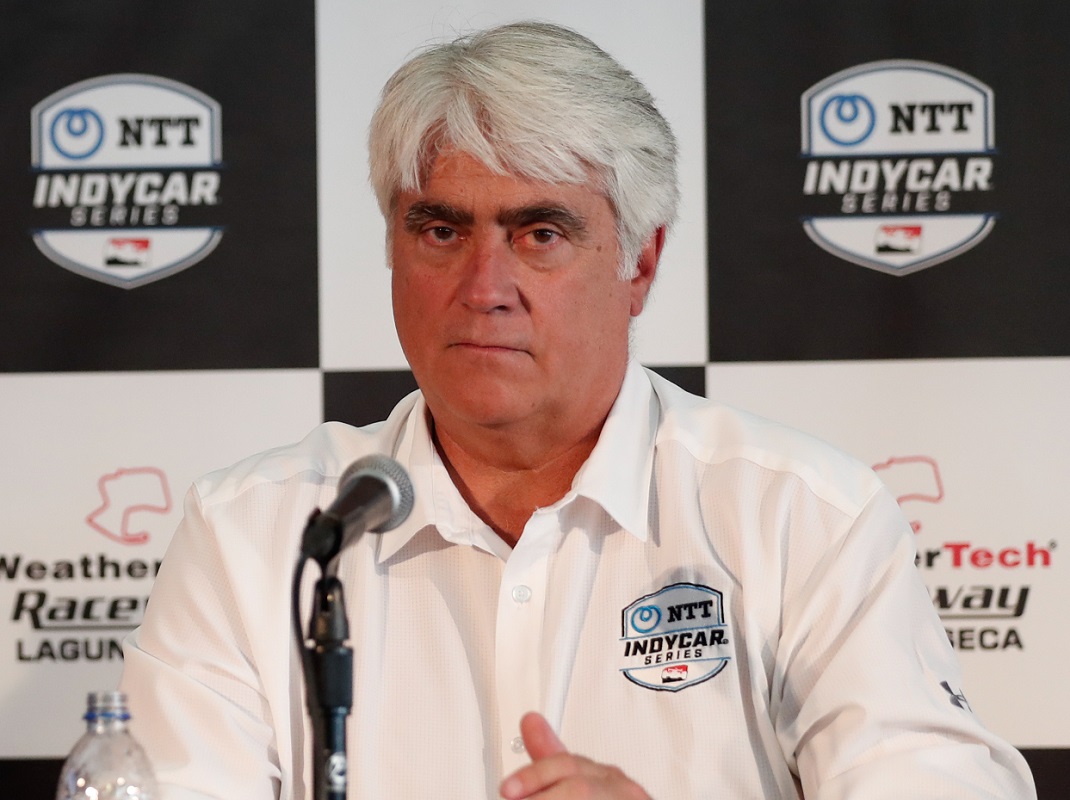 ST. PETERSBURG, Fla. — The NTT IndyCar Series season may not be starting as planned this weekend, but series officials are looking ahead to when they hope to finally get cars on track.

As of now, the American open-wheel racing calendar will begin with the Month of May at Indianapolis Motor Speedway, featuring the GMR Grand Prix and the 104th Indianapolis 500.

That means the Indy car world will get to kick off its racing calendar with its biggest events of the year — and that’s something that Penske Entertainment Corp. CEO Mark Miles is looking at with a positive mindset.

Miles met with the media on a national teleconference Friday to discuss IndyCar’s current position in the wake of the global coronavirus pandemic and stressed that Roger Penske’s team, himself included, is preparing for an unchanged Month of May at this juncture.

“We are absolutely focused on May,” noted Miles. “We’re still in St. Petersburg. I’m with (IMS President) Doug Boles. We’re all going to go home and keep doing what we do. We’re going to be absolutely ready. That’s with the normal schedule. We will obviously evaluate everything every day by the hour.

“We’ll make any changes we have to make, but our mindset and our efforts are completely dedicated to being ready to put on a great show throughout May.”

This year’s May schedule at IMS calls for USF2000, Indy Pro 2000 Championship and Indy Lights doubleheaders on the road course as the main undercards to the NTT IndyCar Series GMR Grand Prix. All of that action is scheduled for May 8-9.

Following the road-course weekend, action is slated to shift to the 2.5-mile oval starting Tuesday, May 12, with opening day practice for the Indianapolis 500.

Additional practice days for the Indianapolis 500 follow May 13-14 before Fast Friday on May 15, the final practice time ahead of Crown Royal Armed Forces Qualifying Weekend on May 16-17.

That two-day affair is headlined by Sunday’s Fast Nine Shootout for the pole, as well as the Last Row Shootout to determine the final three starting positions. A three-hour practice session for the 33 drivers that make the Indianapolis 500 field closes the day on May 17.

Additional Indianapolis 500 practice will take place Monday, May 18, before the track goes dark from Tuesday through Thursday in preparation for Carb Day festivities on Friday, May 22.

Carb Day is headlined by final practice for the 104th Indianapolis 500, as well as the Indy Lights Freedom 100, the Indy 500 Pit Stop Challenge and the Miller Lite Carb Day Concert featuring REO Speedwagon and Styx.

It’s a loaded schedule that could easily encounter change should health conditions warrant in the days and weeks to come, but Miles noted that IndyCar officials will do “everything possible” to have both the Grand Prix and the Indianapolis 500 in May as scheduled.

Meanwhile, Miles added that all of the IndyCar Series team owners are in agreement about the scheduling decisions that have been made, which includes the cancellation or postponement of the first four scheduled races on the calendar this year.

That includes this weekend’s Firestone Grand Prix of St. Petersburg, the Honda Grand Prix of Alabama at Barber Motorsports Park, the Acura Grand Prix of Long Beach and AutoNation IndyCar Challenge at Circuit of The Americas in Austin, Texas.

It’s a tough situation, Miles said, but an understandable one given the extraordinary circumstances.

“Obviously, our team owners want to race and we want to race. We really hate that we can’t give our fans what they want right now. But there’s a very strong sense of cohesion inside the IndyCar paddock (that) we’re doing the right things,” Miles said. “We’re doing what we have to do right now.”

Additional topics broached by reporters on the conference call included the possibility of doubleheaders at more venues and rescheduling races “through December” in an effort to contest as many Indy car events as is possible when it’s safe to do so.

Miles noted that most potential options were on the table, but they’ll just have to wait and see what the situation is when it becomes feasible to race again.

“All considerations, all the fluid dynamics, have to be taken into account when we make the plan going forward,” Miles said. “What can a broadcaster cover? What can the promoters do? What works for Honda and Chevy and our suppliers?

“We don’t have those answers right now, but we’ll do whatever is possible to do to create the fullest season.”

Regarding the last-minute cancellation of this weekend’s St. Petersburg event after initially planning to move forward without spectators, Miles said that decision came down to public health discussions and “a combination of things” surrounding the ripple effect of the coronavirus situation.

“Really there isn’t a sporting event left that feels comfortable running, even without fans,” he noted. “I just think that’s reflective of what’s going on in the country and in the world.”