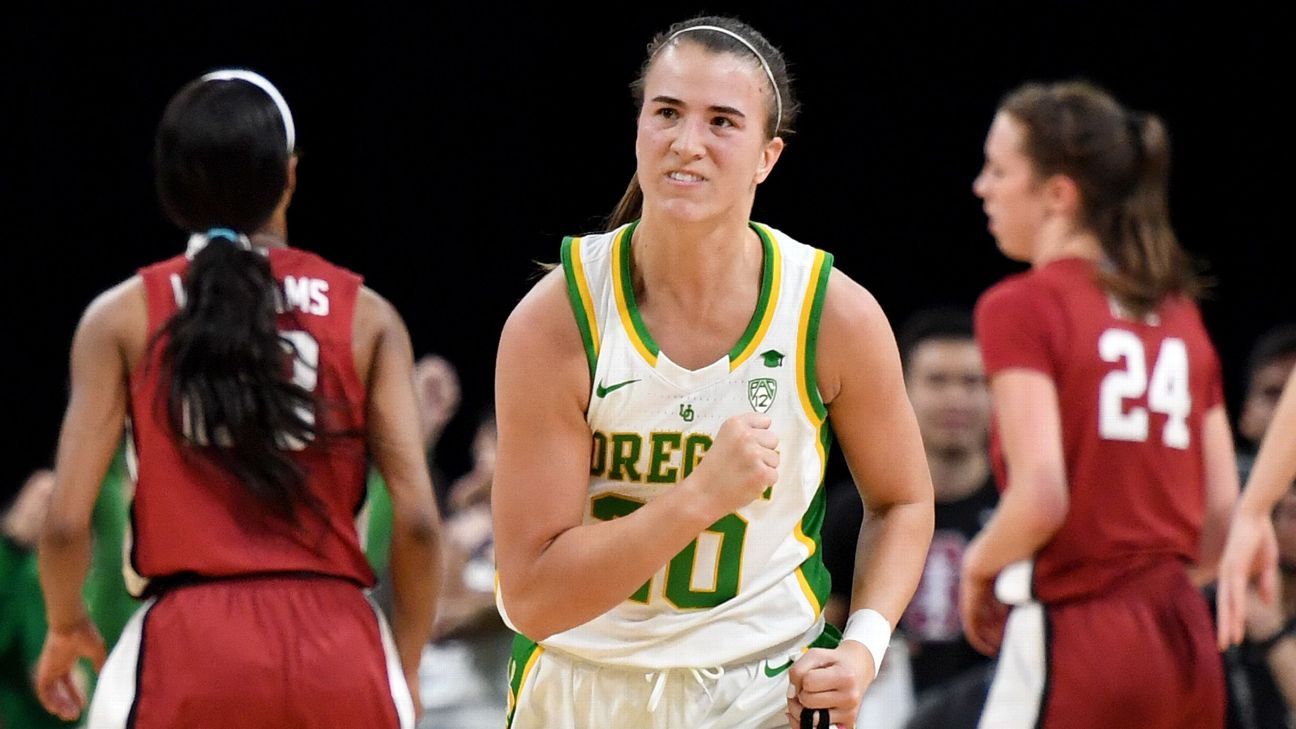 The Wooden Award is given annually to the nation's most outstanding player.

Ionescu is the sixth woman to win the Wooden multiple times, joining Seimone Augustus, Brittney Griner, Maya Moore, Candace Parker and Breanna Stewart. She is the fifth player to win the award in back-to-back seasons. She and former LSU standout Augustus are the two repeat winners who did not win national championships. Oregon was 31-2 and ranked No. 2 in the AP poll when the NCAA canceled its tournament in response to the coronavirus pandemic.

In addition to the Wooden, Ionescu recently won the Naismith Trophy and Wade Trophy and was recognized as the nation's best player by the Associated Press and espnW.

After leading Oregon to the Pac-12 regular-season and conference tournament titles, she was also the Pac-12 Player of the Year for the third season in a row.

A 5-foot-11 guard, Ionescu led the nation in assists as a senior at 9.2 per game, more than two assists per game more than any other player in a major conference. She was fourth nationally in assist-to-turnover ratio. She also led Oregon in scoring at 17.5 points per game and was second on the team and third in the Pac-12 in rebounding at 8.6 per game.

Her senior season also saw her reach several notable career milestones. She became the first men's or women's college basketball player to accumulate at least 2,000 points, 1,000 assists and 1,000 rebounds. She matched her single-season record with eight triple-doubles, extending her NCAA career record to 26. No other player had more than 12.

Ionescu saw her final season marked by tragedy after the deaths of Kobe Bryant and daughter Gianna in a helicopter accident in January. Ionescu had developed a friendship with the former NBA star and spoke at his memorial service on Feb. 24. She dedicated her season to his memory and recorded her final triple-double of 21 points, 12 assists and 12 rebounds in a win at Stanford on the same day she spoke at the memorial service.

And although she didn't bring Oregon its first championship, Ionescu did as much as any Wooden winner to take a program out of the basketball wilderness and make it the center of attention.

Reflecting at the start of the season on her decision to bypass the 2019 WNBA draft and return to Oregon, Ionescu told a story about people encountering the team when she was a freshman and asking her to take photos for them, assuming she was a manager.

That was no longer the case by the time she was a senior, as Oregon's average attendance climbed from 1,629 per game the season before her arrival to 10,852 this season.

"To see the change from people asking me to hold the camera to being in every picture and not be able to go eat breakfast, go to the grocery store, go anywhere without being noticed, is just so different," Ionescu said last fall. "It's something I'm still getting used to and I don't know that I'll ever embrace, necessarily, because sometimes it's nice to just be able to do normal things.

"But it's so humbling to see how far that notoriety has come for me and for our team in general."

Rutgers coach C. Vivian Stringer was also honored Monday. She received the Wooden Award's Legends of Coaching honor. Stringer is the fifth women's basketball coach to receive the honor, given annually since 1999 to honor a coach's lifetime achievement.