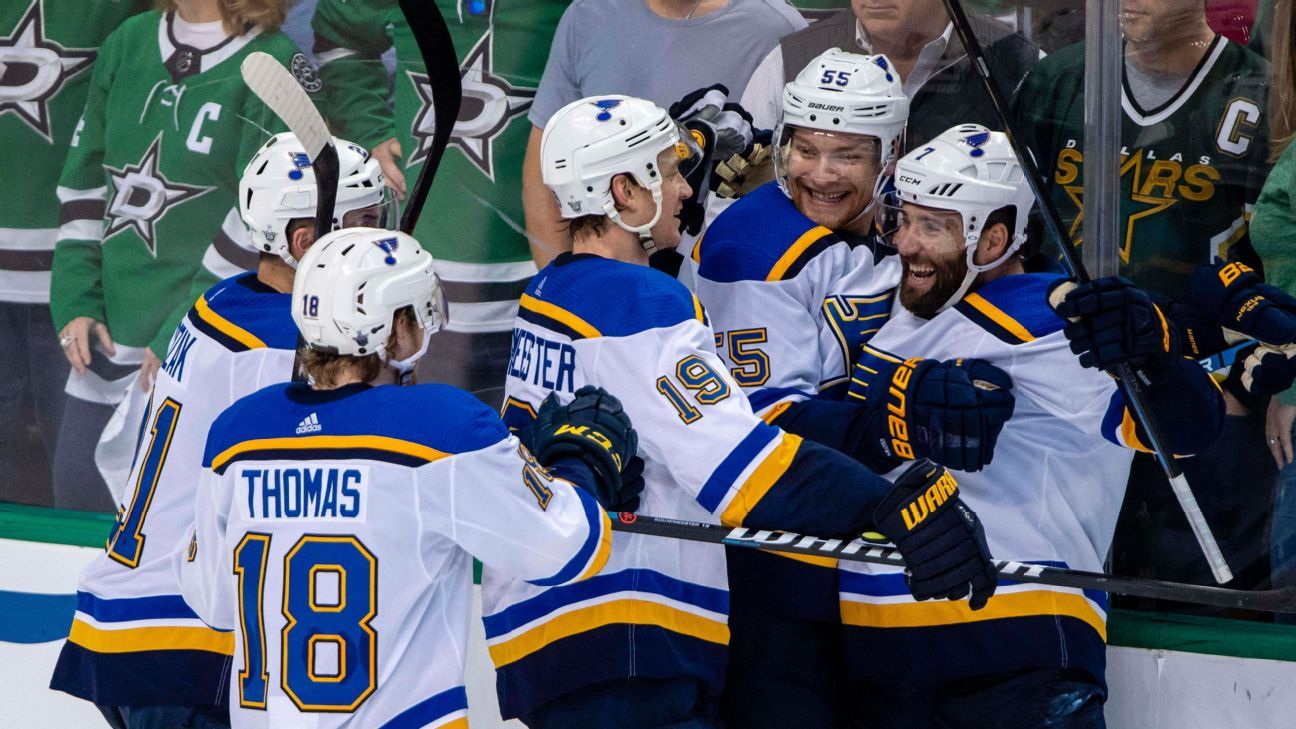 ST. LOUIS -- Ryan O'Reilly said it happens frequently on the St. Louis Blues' bench. There will be a line change. Forwards Patrick Maroon, Tyler Bozak and Robert Thomas will hit the ice. One of their teammates will acknowledge their energetic forecheck in the opposition zone.

"You can kind of hear guys saying, 'Here they go again,'" O'Reilly said. "It's great to watch them do it, how they wear teams down. They just seem to always be in the right area. It's a line that knows their game."

It's a line that generated a plus-3.78 expected goals plus/minus in 34 regular-season games, second-best on the Blues. It's a line that's generated more even-strength goals (seven) in the playoffs than any other grouping on the team. It's a line that didn't exist last season, because Bozak was a Maple Leaf, Thomas was in the OHL and Maroon was splitting time between the Edmonton Oilers and New Jersey Devils. But it's a line that can provide a heartbeat for the Blues when they're flatlining.

"It's been fun. We're a line that has to go out there and compete as hard as we can," Bozak said. "Try to wear other teams down, try and set the tempo as best as we can. And get on the score sheet. That's our job."

Coach Craig Berube put the trio together during the Blues' surge up the standings after Jan. 1. "They just have such great chemistry together," Berube said. "Thomas does a great job of transporting the puck up the ice. Patty's really good along the walls. Bozak and Maroon have done a great job bringing Thomas along as a player, and helped him become a better player."

"We're goofy. We're funny. We're like little kids that never want to grow up," Maroon said. "And then you get the young 19-year-old to throw in the mix, and it makes us feel young again."

Thomas has been a revelation in the playoffs for the Blues after a regular season that saw him improve throughout. "I'd say I had a [crisis of confidence] a little bit at the start. I don't think I started the way I wanted to," said Thomas, who had just one goal in 19 games at the start of the season. "But as the season went on, I got more comfortable."

Not coincidentally, that comfort arrived as soon as Maroon and Bozak arrived on his line.

"Patty's a veteran guy that knows how to score," Bozak said. "I personally do love guys that can protect the puck like that and get around the net. I played with [James van Riemsdyk] for a long time in Toronto, and he's a guy that's good below the goal line and around the net. There are a lot of similarities there. When I played with James, I also played with Mitch Marner, so it's kind of the same element with Thomas. Something I got used to over time."

Patrick Maroon isn't JVR, and Robert Thomas, as of yet, isn't Mitch Marner. But this Blues trio follows that same template, which Thomas appreciated.

"Bozak's been great. He's one of those guys that takes young players under his wing and really helps them out. You look at Mitch [Marner] in Toronto. He's been unbelievable for me, always making sure I'm hanging on to pucks and making the right plays," he said.

Maroon, a St. Louis native, had a well-chronicled path to the Blues last summer, as he took less money and signed a one-year, $1.75 million "show me" contract in order to live closer to his son, Anthony. He ended up with 10 goals and 18 assists in 74 games, but has three goals and three assists in 16 playoff games, including two game winners.

He said he's proud to carry on the tradition of players who go to the greasy areas of the ice for their offense.

O'Reilly said he and the Blues have watched this team come together in the past few months, as the rookie and the veterans found their chemistry.

"I think it's perfect. Thommer coming in, building his game since the beginning of the year, making plays that are beyond his years ... it's impressive to see. And then you have two guys that have been around in so many situations. It clicks. They're great to be around for him. And he's great for them, too," he said.

"Yeah, we don't really have one. We haven't talked about it too much. But it'd be funny if somebody came up with one," Thomas said.

"I don't know what you'd call it. But we should think of one," Maroon said.

Of course, there's no telling how long they'll remain a line. Game 3 was perhaps their most ineffective game of the playoffs. Thomas saw time on other lines. As the Blues battle on in their series against the Sharks, a line scramble for Berube isn't out of the question. It's happened before.

"I might mix 'em up a little bit here or there," the coach said, "but they've always come back together. They just have such great chemistry together."

No matter what you call them.