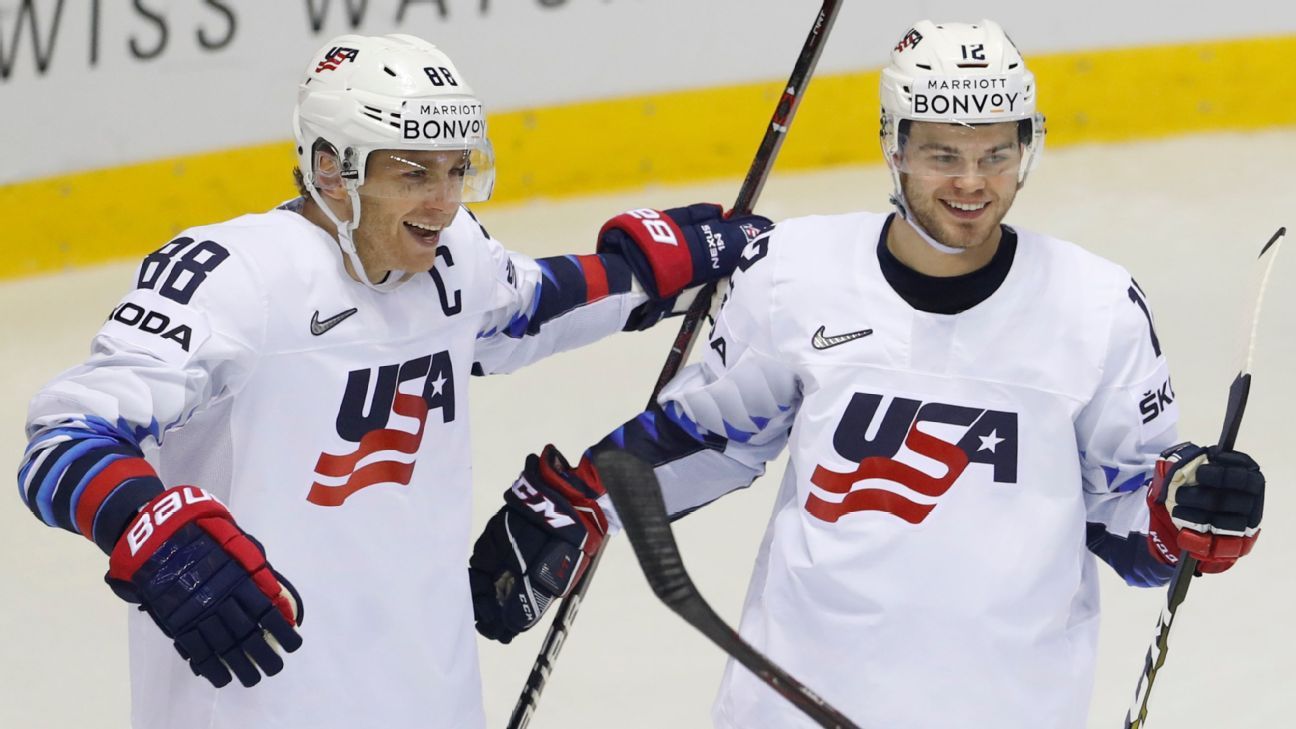 KOSICE, Slovakia -- Alex DeBrincat had two goals and an assist to help the United States rout Denmark 7-1 on Saturday for the Americans' fourth straight victory during preliminary play at the world championships.

Jeff Blashill became the winningest U.S. coach in world championship history in the top division with his 18th career victory in 23 games.

"Schneids made a couple of big saves early, and I thought overall we got better as the game went on and picked up an important three points," said Blashill, also the coach of the NHL's Detroit Red Wings. "We can still tighten up a little defensively, but overall I thought we made some good strides today."

The U.S. is 3-1-0-1 in Group A and plays Germany on Sunday, when Minnesota Wild forward Luke Kunin is to join the team.

Russia beat Latvia 3-1 in Bratislava and leads Group B with a 5-0-0-0 record. Canada beat Germany 8-1 for its fourth straight win, and Norway beat Italy 7-1. In late games, Sweden edged Switzerland 4-3, and Slovakia scored three goals in the first 11 minutes in beating Britain 7-1.

The Americans improved to 6-0-1-1 against Denmark, jumping to a 4-0 lead after the first period.

Vatrano scored the first goal off a breakaway with Derek Ryan. DeBrincat scored 29 seconds later on a power play, putting the puck under goalie Simon Nielsen's glove. Keller made it 3-0 when James van Riemsdyk deflected a shot by Ryan Suter off Keller's back. Kreider made it 4-0 late in the first.

Mark Stone scored three of Canada's first four goals, Anthony Matha added two and Dylan Strome and Jonathan Marchessault each had three assists. Canada is tied with Germany for second in Group A behind Finland (13) with 12 points apiece. The U.S. is fourth with 11 points.

Norway avoided relegation with a second win in as many days with Mathias Trettenes' goal 1:47 into the third the winner.

Italy ended a scoring drought of 447 minutes, 42 seconds at the worlds dating to 2017 when Angelo Miceli scored at 2:03 of the third off a shot by Armin Helfer. The goal was reviewed for a possible kicking motion after going of Miceli's skate only to be upheld to pull Italy within 2-1. Norway answered with five straight goals.

Oliver Ekman-Larsson scored at 11:47 of the third to lift Sweden to the win just 1:20 after Switzerland had tied it at 3 on a goal by Gaetan Haas.