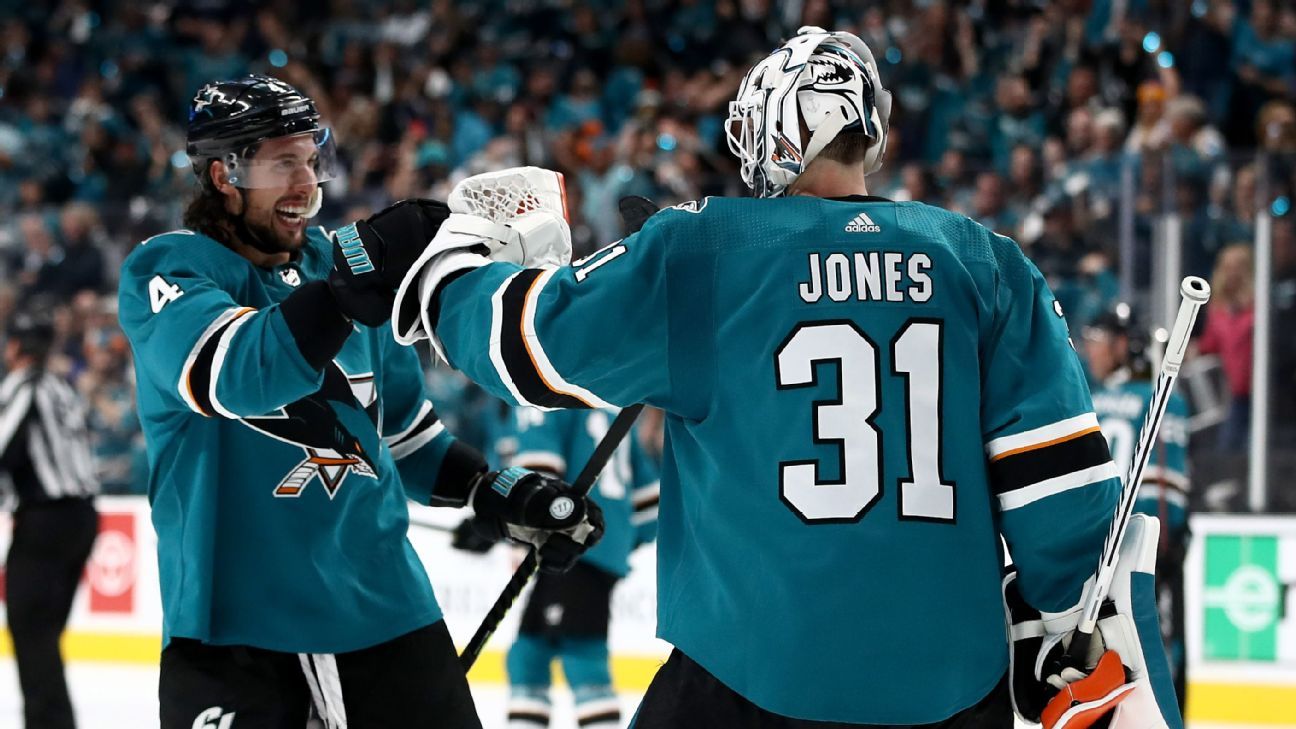 ST. LOUIS -- It was Game 2 of the Western Conference semifinals against the Colorado Avalanche, and San Jose Sharks defenseman Brenden Dillon was avoiding social media at all costs. Not because the Avalanche defeated his team at the Shark Tank, which no doubt perturbed him. But because the living army was scheduled to battle the Army of the Dead outside of Winterfell that evening, and the last thing he wanted to do on that last Sunday in April was accidentally stumble upon the fate of the Night King.

Like millions of others -- 18.4 million people watched the penultimate episode on various HBO platforms last Sunday, in fact -- Dillon is a "Game of Thrones" fanatic, one of more than a dozen in the Sharks' dressing room.

"It's not something I was necessarily into, with dragons and make-believe stuff. It's not really my thing. But it was so well-written," said Dillon, who began watching "Thrones" during his days in the American Hockey League, streaming it on the plane or bus.

But he's a die-hard now. On the road, Dillon and a few of his teammates -- Tomas Hertl and Martin Jones among them -- would crowd into a hotel room, plug in their streaming device to the flat screen and watch the "Thrones" together.

Then, the next morning, they have to be respectful of the viewing habits of others.

"Some guys don't watch it in the night [it premieres], so you have to be careful with what you say in the room the next day, so you're not giving away too much information," he said. "We have a pretty good setup in the hotel. We can plug in and stream it. If you wait too long, you've already heard this or seen a picture of that. In this culture, nothing stays secret for too long."

"I don't wait. It's definitely better at home, but I watched it on the laptop the other day," he said. "I've been trying to watch it before bed, but I keep falling asleep. So I'm more of a Monday afternoon guy. After the skate."

Like many players, he said his "Thrones" fandom was born out of peer pressure from teammates who were already into it. "All my buddies on the team watched it, and they were giving me grief for not watching it. I told them it looked dumb, and that I didn't want to watch it. But then I buzzed through the first season in a couple of days. I was hooked," he said.

Blues forward Ryan O'Reilly tells a similar story. "I started around Season 2. I did the whole first season in a couple of days. I was like, 'This is unbelievable,'" he said.

O'Reilly is another kind of "Thrones" fan, the kind who appreciates the spectacle as much as the storytelling. So while Sanford is staying caught up on his laptop, O'Reilly is willing to wait it out until he can properly experience it.

"I don't want watch it when I'm on the road, in the hotel. It's not a good enough TV. I want to watch it at home, in the dark, in my home theater, volume cranked. You need the best picture quality as possible," he said.

So what are their predictions for the series finale, which airs this Sunday?

First of all, the players polled weren't all that thrilled with Daenerys going all Mad Queen and having her dragon Drogon torch a bunch of civilians at King's Landing.

"I was pretty shocked. She was so great up until then, and now she's turned," O'Reilly said.

"You could see it coming. But I thought there might be something with her dying and Jon Snow wouldn't even have to tell everyone that he's a Targaryen. I thought he'd get the easy way out," Sanford said.

"I wasn't a huge fan of it, to be honest. I thought once the bell started ringing last episode, she would have a little mercy. She basically burnt down the throne she's going to sit on," Dillon said.

All three expect Jon Snow will be the one to ultimately sit on the Iron Throne.

"It's tough to say. I'm hoping Jon Snow, but that's the thing with 'Game of Thrones' -- it's never what you expect," O'Reilly said.

"I think he's the one that has to take down Daenerys if that happens," Dillon said.

As for the players' favorite character on "Game of Thrones" ... well, it should come as no surprise that a bunch of hockey players appreciate someone who's tenacious, efficient and frequently punches above her weight class.

"I like Arya [Stark]. She's a badass. She always gets the job done," Sanford said.

"She always just seems to be standing up for good. She had her list there. Had a good head on her shoulders. And the best kill of the season," Dillon said.

Game 5 of the Western Conference finals between the Sharks and Blues is Sunday in San Jose, the same day as the series finale. Luckily for these "Thrones" fans, it's a 3 p.m. ET start. No need to avoid Twitter, and plenty of time to gather teammates 'round the hotel television to see how it ends.