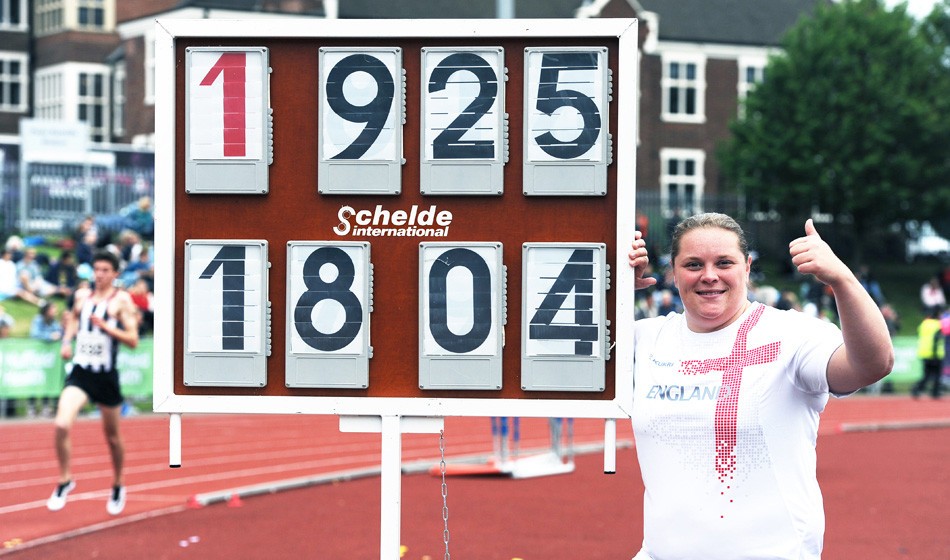 Younger sprinters were among those to impress in what seemed to be near perfect running conditions at the Loughborough International Athletics competition, as the European U20 and U23 Championships qualifying standards drew interest.

However, it was more experienced athletes who stole the show. Sophie McKinna was pleased to get the Doha World Championships qualifying shot put standard with 18.04m. Although not as far as her 18.23m in the Norfolk Championships the previous week, she was happy to make her point on her first throw.

“I’m so surprised and I can’t believe that just happened,” she said. “I didn’t expect that time going into the race.

“This is only my third 100m race of the season and it shows that I’m in such great form.”

Amy Hunt took the 100m in a personal best of 11.31 and the 17-year-old sees the European U20 Championships as a serious possibility. It was a similar story for Jeremiah Azu in the men’s race as his recent 18th birthday passed during the week and her was rewarded with a 10.27 personal best.

Also among the under-20s, Ethan Brown fancies a Europeans slot after his 46.88 400m win, while Josh Zeller’s 13.62 under-20 110m hurdles victory confirmed his top-ranked status and similar ambitions.

Among the more seasoned competitors, Meghan Beesley took the women’s 400m hurdles in 56.72, while Seb Rodger won the men’s race in 50.06, in his first outing of the season.

Shannon Hylton was another to come good, but had to battle a wind in her 23.42 200m, after an 11.59 guest 100m victory. These came after her Doha Diamond League 200m disqualification.

Phillipa Lowe said she wants a 400m individual berth in the World Championships after victory in Loughborough in 52.91.

In the field, Scott Lincoln continued his four-year No.1 ranking with a 19.23m shot victory, while Ben Hawkes won a close hammer with 70.52 from Craig Murch.

Harry Hughes impressed with 80.32m in the javelin, the first time a British athlete has thrown over 80 metres in seven years. That PB moves him to 11th on the UK all-time list.

Charlotte Payne threw a hammer PB of 61.83m to move to third on the British all-time junior list and also achieve a European U20 qualifier.