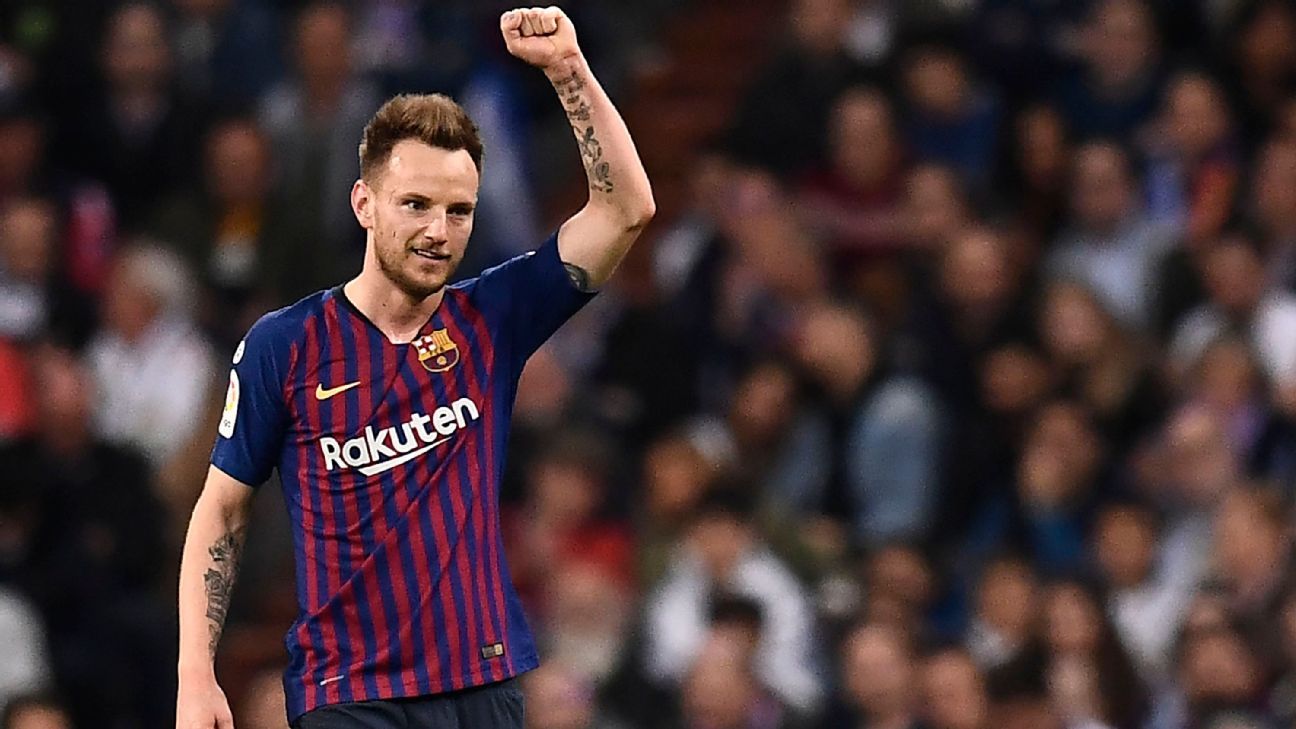 The Premier League transfer window is open. You can click here to review all the latest transfers and keep up to date with all the latest gossip below.

Transfer window grades | When does the window open in Europe? | QUIZ: Which club should you join?

The Daily Record reports that Manchester United are working on a deal to bring Barcelona midfielder Ivan Rakitic to Old Trafford.

World Cup finalist Rakitic has been identified by Camp Nou officials as an expendable asset, with the La Liga champions looking for around €55 million for the 31-year-old.

United, however, are keen to drastically lower that fee, but are willing to pay upward of €35m for the former Sevilla man. There are no concerns regarding the player's fitness, despite hitting the wrong side of 30, with Rakitic missing only nine matches through injury or illness during his five-year spell with Ernesto Valverde's side.

09.51 BST: Juventus will be forced to pay up if they want to make Maurizio Sarri their next coach with Chelsea not minded to sack the Italian regardless of whether or not he wins the Europa League final, sources have told ESPN FC.

Sarri's future remains far from certain despite fulfilling his primary objective of securing Champions League qualification for Chelsea, and Roma have also been linked with a move to bring the former Napoli boss back to Serie A.

Sources have told ESPN FC that while Chelsea are prepared to negotiate a compensation package with any interested club if Sarri makes it clear that he wants to leave, they have no plans to dismiss him even if he fails to win a first piece of major silverware at Arsenal's expense in Baku.

09.32 BST: Radio Galega report that Barcelona have bid €25m for Celta Vigo's Maxi Gomez. With the 22-year-old striker also linked to Tottenham, we'd be surprised if Vigo even considered this one given he has a release clause of £43m.

Barca reportedly turned down Benfica's initial offer of €12m for the keeper. According to Record, Benfica executives will travel to Barcelona to have a meeting with their Barca counterparts to seal the deal that will be worth €20m. Benfica will pay €12m and include their 18-year-old right-back Joao Ferreira in the deal.

Cillessen, 30, is also a reported target of Porto and Valencia. The Netherlands international joined Barca from Ajax in 2016 as a replacement for Claudio Bravo but has primarily been used as a back-up to Marc-Andre ter Stegen. Cillessen has made two league appearances for Barca this season and is tied to the Catalan giants until June 2021.

08.25 BST: Tottenham is interested in signing Real Madrid midfielder Dani Ceballos, according to AS. Spurs coach Mauricio Pochettino considers Ceballos as an ideal replacement for Christian Eriksen, who is reported to be a target for Real Madrid and is yet to sign a new contract with his current deal expiring in 2020.

Ceballos has made 34 appearances for Madrid this season, just 19 as a starter. He is tied to Madrid until June 2023. The Spain international is reportedly keen to leave Madrid this summer in search of more playing time.

Real Madrid coach Zinedine Zidane recently suggested players that know they will not feature regularly next season would be better served leaving the club. Ceballos, who signed for Real Madrid in the summer of 2017 from Real Betis for €17m, is reportedly among the players told by Zidane that he is surplus to requirements.

According to AS, Madrid don't want to sell Ceballos this summer and will only consider the player leaving on loan, but would be willing to include a purchase option in the deal.

08.00 BST: Manchester United will have to pay as much as £50m if they want to sign Crystal Palace right-back Aaron Wan-Bissaka, according to the Daily Mirror.

The 21-year-old had a breakout season in 2018-19, making 39 appearances for the Eagles as they finished comfortably in mid-table in the Premier League, 15 points above relegation. He won more tackles, made more interceptions and completed more successful duels than any other defender in the league this season, o so it was no surprise he won the club's Player of the Year award.

Wan-Bissaka, whose contract at Selhurst Park runs until June 2022, told the Evening Standard earlier this month: "The situation just shows that my performances don't go unnoticed. But I am with Crystal Palace at the moment. That is where my contract is and that is where I will be next season.

"I have got three years left on my contract. It says I am going to be there, so that is all I can focus on now."

But if United were to make a big bid, could Palace refuse?

Is Pogba bound for Real Madrid? Will Mbappe leave PSG?

Gazetta dello Sport writes that Juventus are set to reignite their interest in Lazio midfielder Sergej Milinkovic-Savic this summer.

The Serbian has had a modest season in Italy, notching five goals and a further four assists in Serie A, but Juventus reportedly are keen to reshape their midfield with more physicality and bite, with Milinkovic-Savic seemingly fitting the bill.

The 24-year-old has been linked with a string of elite European clubs for more than a year, with Juventus and Manchester United heading the potential suitors at the turn of 2018, but it now appears that the Serbia international could be part of a new-look trident in the Juve midfield, moving to Turin alongside free agent Aaron Ramsey.

News of Milinkovic-Savic's potential move to the Bianconeri could also add further fuel to speculation linking Lazio boss Simone Inzaghi with the managerial vacancy at the Serie A champions.

The news of Toni Kroos' new contract at Real Madrid has placed a move for Manchester United midfielder Paul Pogba into serious doubt, according to AS.

The new deal for Germany international Kroos includes a significant pay rise, and when added to Los Blancos' considerable transfer plans, it is believed that the Madrid hierarchy are targeting prudency over big-money signings this summer.

Zinedine Zidane's other main targets are Eden Hazard and Christian Eriksen, and the precarious contract situations at the two players' respective clubs places Real in a great negotiating position when it comes to thrashing out modest deals.

Pogba, meanwhile, has a contract until 2021, with United having the option of a further year, meaning that Real might need to bide their time before being able to make a move for the World Cup winner.

- Newcastle boss Rafa Benitez is plotting an ambitious move for outgoing Manchester United midfielder Juan Mata -- assuming Benitez remains at St. James' Park -- according to the Sun. Thirty-one-year-old Mata's deal is set to expire at Old Trafford, but Benitez has contractual issues of his own on Tyneside.

- Wolves and West Ham are set to do battle over the signing of Real Betis midfielder Victor Camarasa, reports the Mail. The 24-year-old enjoyed a successful loan spell at Cardiff City, and the English clubs are keen to extend the Spaniard's spell in the Premier League following the Bluebirds' relegation from the top flight.

- The Sun writes that Watford have seen a £7m bid rejected by Reims for French striker Remi Oudin. Newcastle are also interested in the player dubbed "the next Robin van Persie" following the 22-year-old's goal-scoring exploits in Ligue 1 this season, with his 10 goals guiding Reims to ninth place.

More in this category: « Ramsey has played last Arsenal match - Emery Pulisic wants to emulate Hazard at Chelsea »
back to top