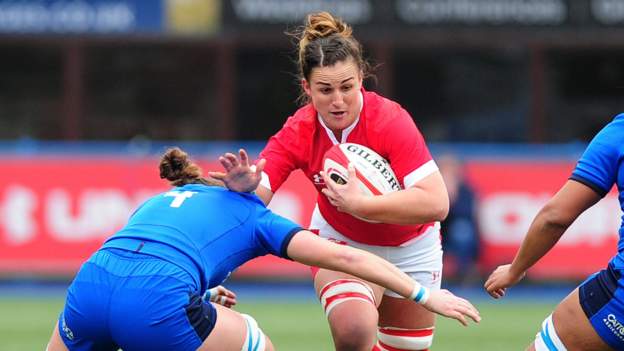 But the Welsh Rugby Union is encouraging players to join the Premier 15s - England's top flight - and Bristol Bears have welcomed them with open arms.

Six Welsh players have re-signed from last season, including Wales captain Siwan Lillicrap, with five more about to join.

Wales fly-half Elinor Snowsill has said the national side will benefit from having so many players at one club and head coach Kim Oliver is grateful for their contribution.

"They're a massive part of the team, they bring something different, they drive the standards at Bristol," says Oliver, an England centre between 2005 and 2013.

"I played for Bristol for a long time and there have always been Welsh players. For me it's really important that we keep that link.

"Having them here is something that I will continue to push for."

A lack of funding has seen Wales struggle to keep up in recent years with England, who won the World Cup in 2014.

However, the Welsh game is aiming to reduce that gap. There are plans for Wales' women to go professional, like their English counterparts, while the national team are searching for a new head coach to take them through the 2021 World Cup and into the 2022 Commonwealth Games.

Oliver, who has developed a strong working relationship with Bristol men's director of rugby Pat Lam, is happy to help foster and improve the next generation of Welsh players.

But the Rugby Football Union has said that Welsh clubs could join the Premier 15s in the future. With the WRU developing two women's super clubs, then there could come a time when Welsh players are tempted home.

"Until that happens we hope to develop the players we've got with us," Oliver says.

"If they do leave, then we'll wish them well - and it will be great competition within the Premier 15s whenever that happens.

"Fingers crossed it is not for the next couple of years."

A date for the Premier 15s to start the new season is yet to be confirmed by the RFU although players can now return to Stage One training.