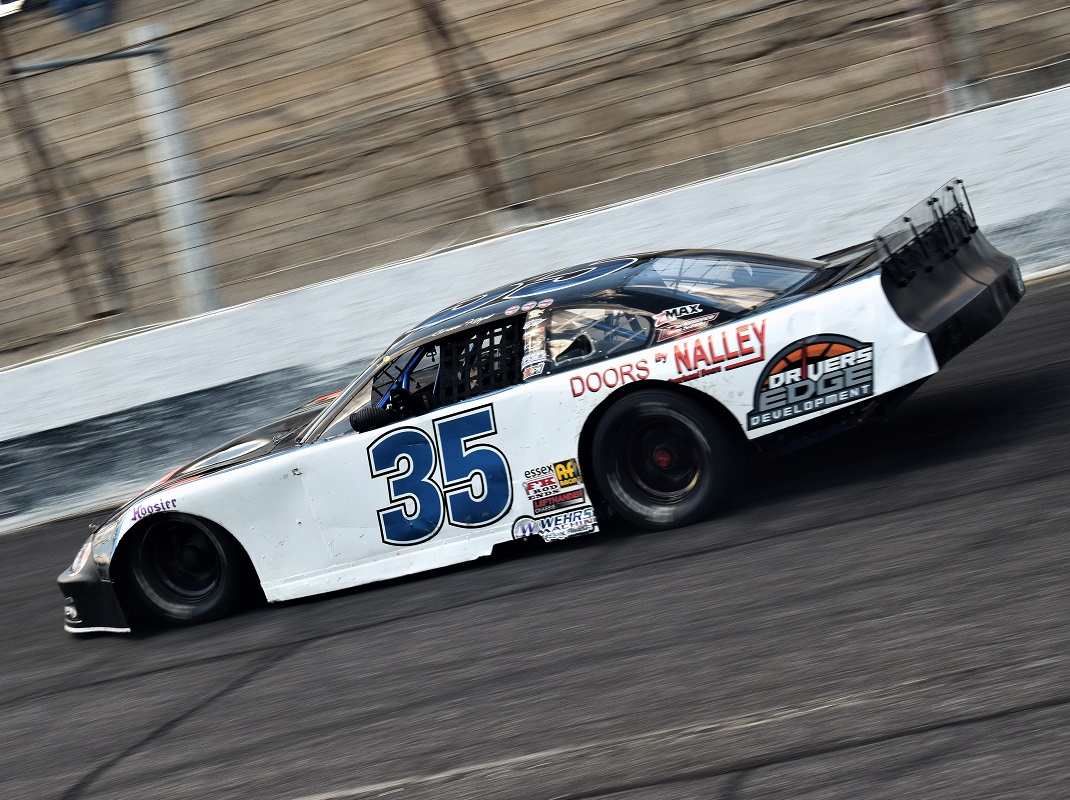 Four hours of on-track activity at the historic .363-mile oval was broken into three rounds of practice for both CARS Tour divisions: late model stock cars and super late models.

While the names atop the charts shuffled over the course of the afternoon, it was ultimately Carson Kvapil (SLM) and Craig Moore (LMSC) who ended up on top.

Kvapil posted the fastest lap of the day, topping a lean super late model field with a lap of 14.805 seconds (88.267 mph) in his No. 35 Wehrs Machine Chevrolet during the final session.

The son of 2003 NASCAR Gander RV & Outdoors Truck Series champion Travis Kvapil is seeking his first CARS Tour victory this weekend and ended the day optimistic about where his team is sitting going into Saturday.

“We feel good; obviously tomorrow is a different deal, but it was good out there,” Kvapil noted. “When this place gets hot and slick, it’s a challenge, but I think we’ll have something if we can keep the handle on it. It’s still a long race.”

Kodie Conner was second-quick overall (14.935) and fastest in the opening practice, while Matt Craig ended the day third-best on the combined sheets (14.948) and topped the second round of drills.

In late model stock car action, Craig Moore led the way at 15.209 seconds (85.923 mph), topping the second round of practice over Mini Tyrell (15.247), who was unofficially fastest in the first round and third overall for the day.

Among the late model stock drivers, the general consensus was that many of the lessons learned on Friday wouldn’t necessarily all translate over to Saturday night’s racing action, considering all the practice done was during the heat of the afternoon.

“I think a lot of it will come down to your notebook and how you can apply those tools to where your car is at,” explained Layne Riggs, whose best lap of 15.410 seconds put him 11th in the second practice. “We felt good about our car; we were a little tight, but we needed that because of how hot and slick the conditions were all day. When the temperature cools off, especially here, the track is obviously going to change.

“We’re comfortable with where we’re at now, and hopefully we’ll be saying the same thing after tomorrow night is over with.”

It was a slightly modified tune, however, for Ashland, Ohio, rookie Jonathan Shafer.

Shafer put the Nelson Motorsports No. 2 fourth in the second practice and was less than a tenth of a second off Moore’s leading time.

The 15-year-old feels that he and his team may not have to alter much at all in order to find themselves in contention come the end of 125 laps Saturday night.

“Overall, we feel really good going into the weekend and I think Friday was a really productive day for us,” Shafer said. “Our first two runs, we were lacking some drive off (the corner), but we came in and fixed that with a few adjustments … particularly a packer in left rear that I felt like really helped. After that, we went back out and found some speed.

“Our mock run was definitely the best the car felt all day long, and the only thing I see really changing as the night falls tomorrow is that we’re going to get tighter and gain grip,” he added. “You don’t want these cars too loose, and I think we got our car pretty close to where we’ll need to be so that when the sun goes down, we’ll have a shot. I’m really excited, especially because we had speed the last time the CARS Tour came here.”

As for the defending CARS Tour winner at Hickory, Corey Heim? His refrain was fairly simple.

“The goal is just to do what we did last time we were here,” said Heim, who will pilot the Lee Pulliam Performance No. 78. “We want to go home with another checkered flag.”

Heim led three times for 101 of 150 laps in the June 13 CARS Tour stop at Hickory, notching his maiden CARS Late Model Stock Tour victory in his sixth appearance in the division. Heim previously won a CARS Super Late Model Tour event back in 2018.

Saturday’s pit gates at Hickory will open at 10:30 a.m. ET, with rotating practice for both divisions starting at 1 p.m. Qualifying follows at 5:15 p.m. and racing kicks off at 7 p.m.

For fans who can’t make it to the race track, the night of racing will be broadcast via SPEED SPORT Network affiliate CARS Tour TV.