Villa back in Premier League after win over Derby 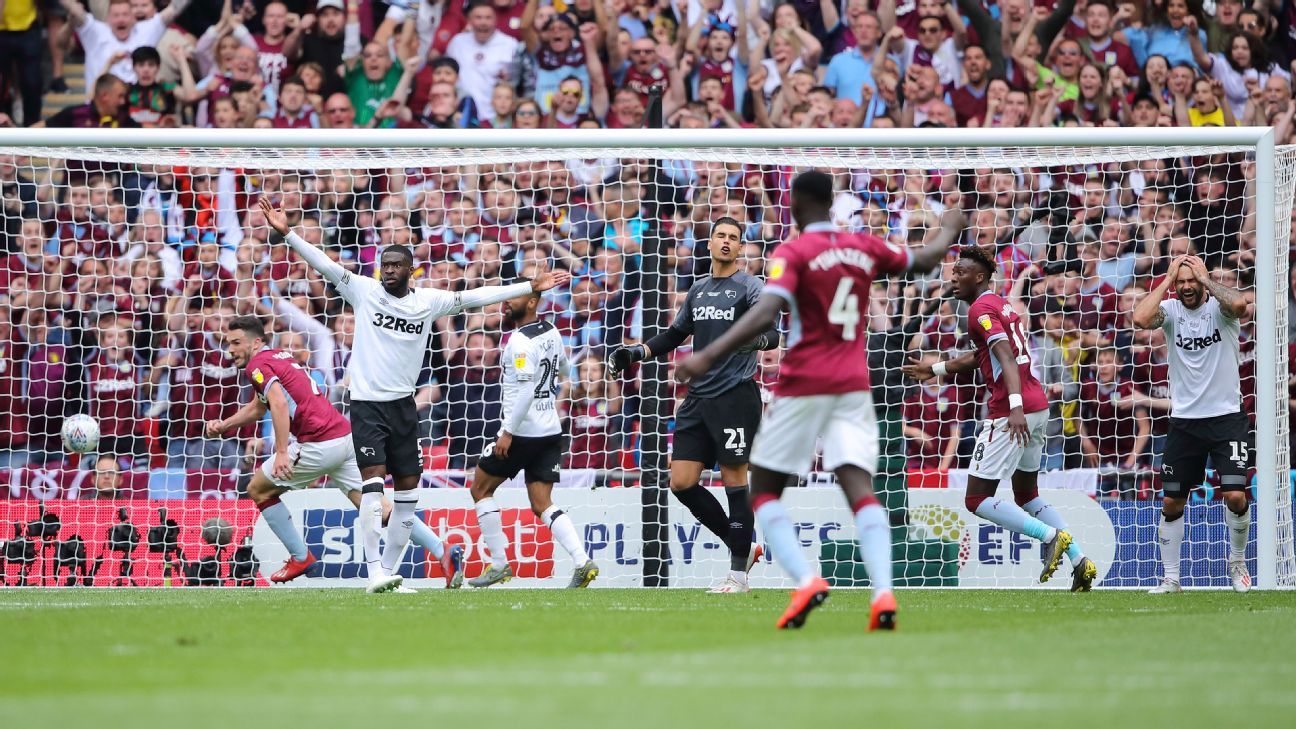 Aston Villa returned to the Premier League as goals from Anwar El Ghazi and John McGinn earned a 2-1 victory over Frank Lampard's Derby side in the Championship playoff final at Wembley Stadium.

El Ghazi made the breakthrough when he diverted in a cross just before the break, and McGinn capitalised on hesitation from keeper Kelle Roos to seal the win for Villa, who held on after Jack Marriott had pulled one back late on.

Villa created the first chance after five minutes when, from a Jack Grealish cross, Axel Tuanzebe scuffed his attempt when the ball fell to him inside the area.

Soon afterward, Grealish, with space to run into after a loose clearance from keeper Roos caused problems, blasted over.

Derby's Jayden Bogle fired in a dangerous low cross that created confusion, but back came Villa, and El Ghazi's run took him into the area before Richard Keogh ended the threat.

McGinn thumped wide after an El Ghazi cross had caused confusion, and El Ghazi was booked for fouling Bogle only for Derby to waste the free kick.

Villa's on-loan Chelsea striker Tammy Abraham, who had struggled for chances in the opening stages, worked space but shot over after 33 minutes.

Mason Mount, on loan at Derby from Chelsea, had the first effort on target after 37 minutes when his drive was held by Jed Steer.

But Villa made the breakthrough close to half-time, Albert Adomah's cross from the right diverted in by El Ghazi.

Mount went into the book in the early stages of the second half for a foul on Abraham, Villa annoyed that advantage was not played with a swift counter-attack developing.

Conor Hourihane's free kick forced Roos to punch clear as Tyrone Mings closed in, but Villa doubled their lead after 59 minutes when the Derby keeper wanted too much time to claim El-Ghazi's deflected shot and McGinn jumped to head in.

Lampard responded, taking off Tom Huddlestone and replacing him with Marriott, but it was Villa who threatened again when Grealish shot wide.

Another forward, Martyn Waghorn, came on for Derby as the game headed toward its final 20 minutes, Mount making way, but Lampard's side were showing few signs of finding a way back.

Bogle fired into the side netting from an angle with teammates well placed in the middle, and then Mount miscued after neat buildup play on the edge of the Villa area.

Derby and Lampard had new hope after 81 minutes when Marriott finished from close range following a spell of pressure. But despite seven minutes of stoppage time being added, they could not find an equaliser.