Colton Parayko and the Blues are playing for Laila Anderson 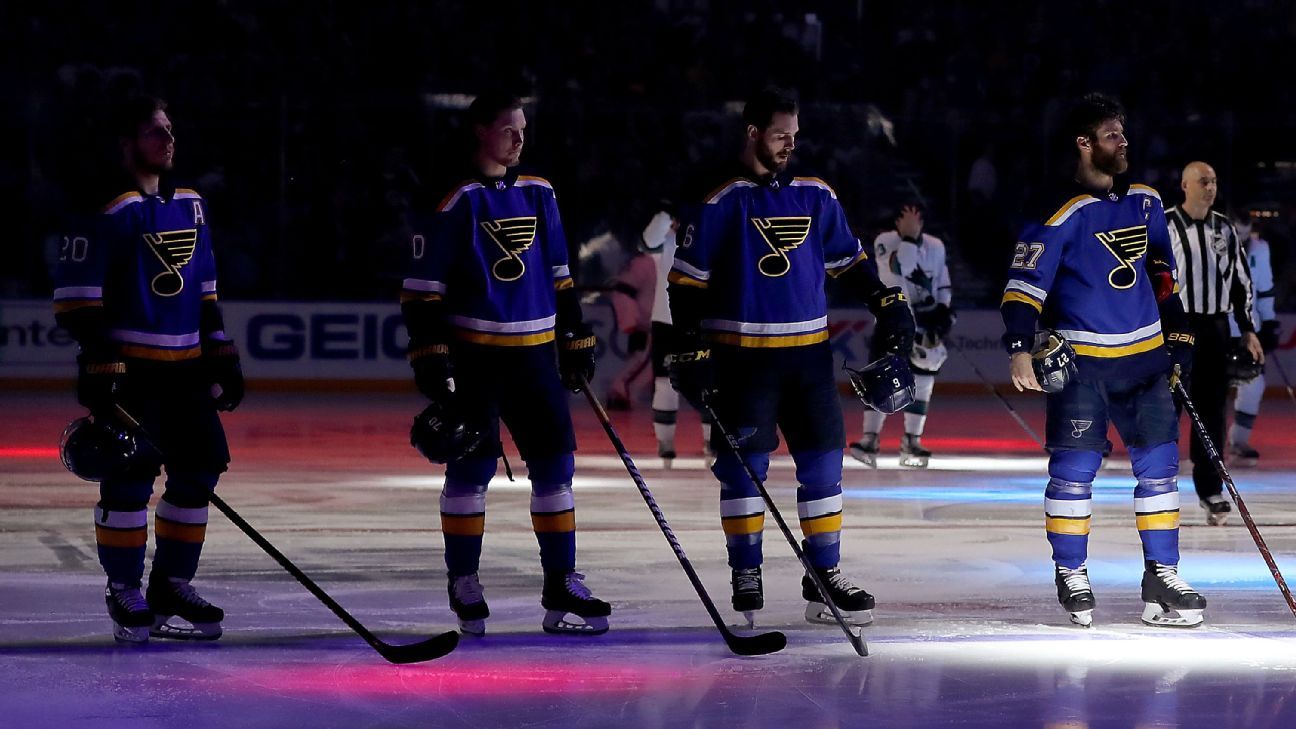 ST. LOUIS -- Laila Anderson pointed the microphone at St. Louis Blues forward Alexander Steen. He had done plenty of interviews after winning the Western Conference championship on home ice that night, but this one was clearly the most meaningful.

"So tell me, Alex, what emotions are going through your head?" said the 11-year-old, her cherubic face beaming under a Blues snow cap.

"Good question," he said. "It's very special to do this in this town, and to have you here was even extra special."

"Thank you. I appreciate that," she said, before continuing the postgame interview on behalf of a local NBC affiliate. She asked Steen about facing former Blues captain David Backes, now a member of the Boston Bruins team awaiting them in the Stanley Cup Final.

"I understand you guys are friends," Anderson said, "but you gotta get aggressive out there."

Steen smiled. "But we got you. Our lucky charm."

Back in January, almost no one expected the St. Louis Blues to be playing for the Stanley Cup, as they had the fewest points of any team in the league. But even if they turned their season around, the odds felt insurmountable for her and her family that Laila Anderson would be healthy enough to watch one of their playoff games, given her condition.

Anderson is battling hemophagocytic lymphohistiocytosis, or HLH, a life-threatening immune disease. Only 15 other children in the world have been diagnosed with it. In some ways, her battle with the disease -- diagnosis, treatment, surgery and recovery -- has run on a timeline parallel to the Blues' own comeback this season.

Their journeys intersected in Game 3 of the Western Conference finals, when Laila's doctors cleared her to attend the playoff game. You've probably seen the video of her mother, Heather, surprising her with the news, creating a moment of tearful elation that went viral. They would attend Games 4 and 6, as well, celebrating with the team after the Blues advanced to the Final with a win over San Jose.

"I was instantly bawling. I can't believe we're here. And I can already taste that Stanley Cup," Laila said on Fox Sports Midwest after Game 6. "They've inspired me so much. But to hear from the players' mouths that I'm their inspiration in the past two games ... it instantly makes me cry."

But she is an inspiration, according to defenseman Colton Parayko, who has developed a friendship with Laila over the past several months to the point that she wears a jean jacket with her name and his number to the games.

"We get to show up to the rink and be with the guys, do things like that. But you go to the hospital, and you speak with her, and you watch her go through all that stuff. I can't imagine what she's going through. What kinds of things they're putting in her body to try and help her recover," he said before Game 1 of the Stanley Cup Final. "She continues to have a strong attitude. A positive attitude. It's so special. We might lose a hockey game, and we're frustrated or go home really upset. But there are people out there trying to battle for their lives."

He pauses for a moment.

"It gives me chills. I have chills right now thinking about it."

Parayko got to know Anderson at a Halloween event at St. Louis Children's Hospital last year, although he said he remembers the young Blues superfan before that. "Ever since I've been here, I remember her. When you walk through the tunnel and go to the rink, she'd be there giving you fist bumps and everything like that."

He took her around the hospital, trick-or-treating. She made him laugh. They formed an instant bond.

"He's all-in with her," Heather told the St. Louis Post-Dispatch. "Ever since then, he's come to visit her in the hospital. Stayed a ridiculously long time. They actually communicate once or twice a week. He just checks on her. It's a genuine friendship."

Parayko said he receives text messages from Laila. "She always has something funny and witty to say," he said. "She has a little swagger."

He stayed in touch as Laila dealt with chemotherapy treatments that began in October, and through the brain biopsy she had that required 65 stitches on her head for the wound. He skated in a game against the Los Angeles Kings in November when the Blues set up a table in their arena so fans could register for a swab kit, to see whether any of them would be a bone marrow match for the transplant she needed. He shared in her joy when, in early December, it was revealed that she had, in fact, found a match. The Blues published a photo of Laila on their Instagram feed holding a sign that read: "A Perfect Match has been found, and they are excited to save my life."

She had a bone marrow transplant in January and had been isolated to her home and the hospital in the days after it. Which brings us to the video:

Her mother said the doctor was willing to "ease up a little" on the travel restrictions, before asking her daughter to guess where she was going. Laila burst into tears, realizing it meant she was going to see the Blues.

The Blues played the video during the game. It was hard to discern whether there were more cheers or tears at that moment, but there was a significant amount of both.

Parayko knew how much it meant to her.

"I remember doing a signing my rookie year, and she came through. She's been here ever since I came into the league. She didn't just show up on the scene and become a Blues fan. That's the exciting part about her getting the chance to come to the games after being in isolation in six months," he said.

The Blues have many different motivations when it comes to chasing the Stanley Cup. They play for each other. They play for the decades of alumni, and for a franchise searching for its first championship, in its first Stanley Cup Final since 1970. They're playing for the fans.

And they're playing for Laila. That's what Patrick Maroon told her as he hugged her after Game 6. That she was always on their minds.

"Of course. One hundred percent. [She's] meant a lot," Parayko said. "It's hard to describe from my standpoint. She's taught me a lot from outside of hockey. Because there is so much more to life than hockey."

Even if, for many young fans like Laila, hockey is what keeps them going.

It's the tritest of sports fan clichés: That they "live and die with their teams." But it's that notion that overwhelms Parayko. That there are kids like Laila for whom the Blues are a reason to believe, or to keep fighting. That what he does means that much to them.

"We've had some parents tell us that they haven't seen their kid smile like that in six months. One of the kids that I visit was running for the first time in two years," he said.

During his time as a professional athlete, Parayko has grown to appreciate his time working with young fans who need support, especially after his interaction with Laila.

"This [is] the part I enjoy the most outside of hockey. Getting to go to children's hospitals. The kids are so strong. Just to be able to see them battle through it," he said. "We're not there being their doctor or anything. We're not going to cure them. But you just try to give them anything you can on your side. Give them some smiles."

Laila is scheduled to attend Game 3 on Saturday, the first Stanley Cup Final game in St. Louis since 1970.

"Look where we are now. After 49 years, we're here. We're so close to the Stanley Cup, why give up now?" she said after Game 6 last week.

During this run to the Stanley Cup Final, the Blues have prided themselves on that very thing: never giving up. Like when they were dominated in Game 1 against Boston, then rallied to win Game 2 on Carl Gunnarsson's goal in overtime.

"That's just the team we are. We come back like that. We never give up," Parayko said.

How can they, when someone like Laila Anderson is in their lives? When she's fighting as she fights? When her spirit and positive attitude are that overwhelming to everyone around her? When players like Parayko have learned more from her resilience than he thought he ever could?

"The thing that she taught me was to just be a warrior. And that's meant a lot, because she continues to battle," he said.