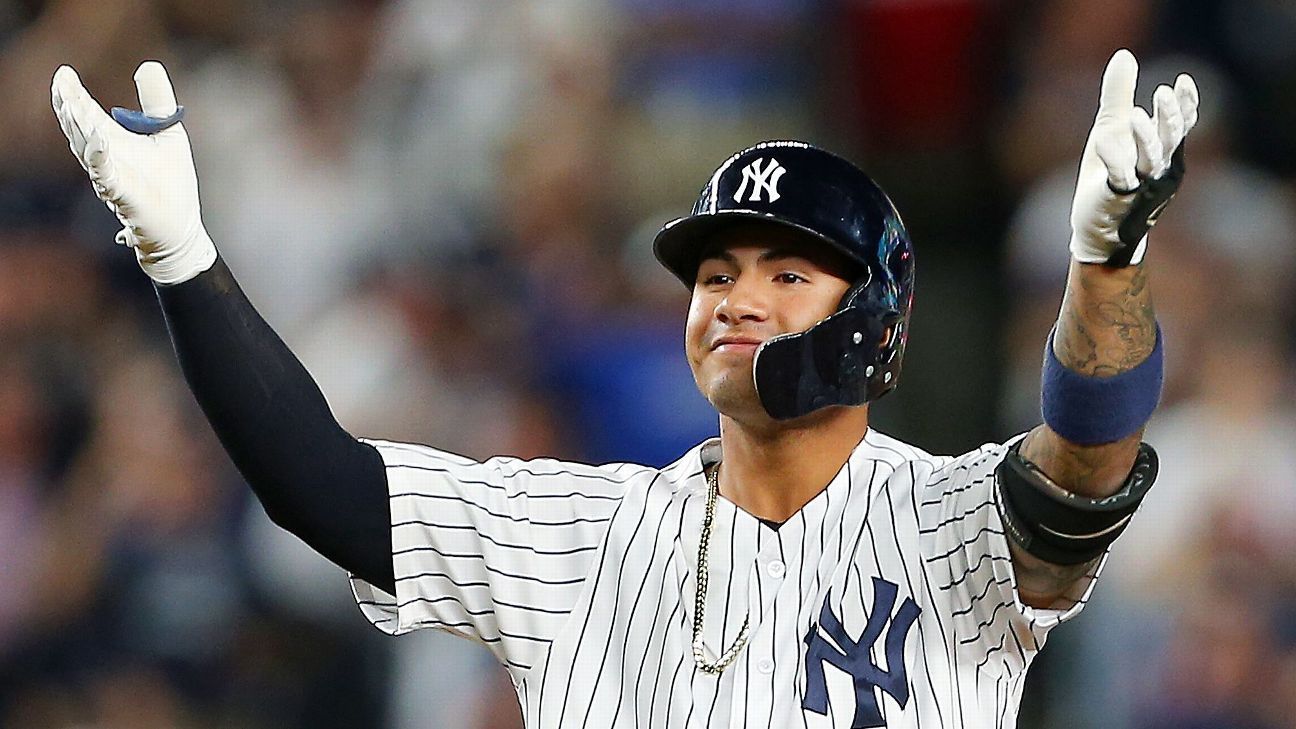 BALTIMORE -- When Gleyber Torres packed up his baseball belongings Wednesday ahead of the New York Yankees' first two-city road trip of the season, he accidentally left something behind -- his batting gloves.

Since he still needed a pair to hit with when the Yankees opened their series against the Baltimore Orioles at Camden Yards on Thursday, New York's equipment staff reached into its cache of extra game-day items.

Maybe that's where the 22-year-old's extra power came from.

"Gleyber Day. It was impressive," Yankees right fielder Aaron Judge said. "He came up big in certain situations where we needed someone to come up with a big hit for us. He was the catalyst of this win for us."

Added first baseman Luke Voit: "We needed Gleyber to have a big day, and he did, and that was a huge lift for our team."

It was Torres' sixth-inning three-run homer that propelled the Yankees to a lead they wouldn't relinquish in the eventual 8-4 win. The victory snapped a two-game losing skid, improving New York's early record to 3-4, allowing one injury-plagued, drama-filled week to end on a high note.

"It was nice to break through with a couple of big hits, big hits that happened to be home runs," Yankees manager Aaron Boone said. "That really energized the guys a little bit and allowed us to exhale a little bit."

Earlier in the week, the Yankees sent three key players to the injured list due to various ailments. Miguel Andujar (small labrum tear) and Giancarlo Stanton (left biceps strain) were shut down on the same day. Mere hours before Torres' 4-for-4 showcase, Troy Tulowitzki (left calf strain) was added to the IL, too.

There are a league-leading 11 total players on the Yankees' injured list.

"We know it's a lot of injuries, but it's part of the game," Torres said. "We are a really good team, we are really good guys, we can do the job and we just try to refocus."

It took little time for Torres to focus in Baltimore's home opener. During his first at-bat leading off the third inning, the shortstop turned on a 1-1 splitter from Orioles starter Alex Cobb, depositing it well over the left-field wall.

After drilling a double down the right-field line, against an infield defensive shift set up against him, Torres homered for a second time in his sixth-inning at-bat. That one came off Mike Wright, marking the second time in the young, two-year player's career that he had homered off Cobb and Wright in the same game. To cap his four-hit day, Torres singled in the eighth.

"He can use the whole field and can use it with power," Judge said. "Especially a guy that plays second or shortstop, for him to come up and he'll hit homers to left field and all of a sudden he's spraying doubles down the right-field line, it's just impressive what he can do at such a young age.

The last time Torres homered off Cobb and Wright in the same game -- Aug. 1, 2018 -- was the last time he had registered a multihomer game.

Oh, and there's more. In addition to that milestone, Torres also rose through the ranks in the Yankees' record book with his exploits in this game. He became:

"One of the things I continue to challenge him on is that he's really good at locking in, usually the bigger the situation, which is a great trait to have," Boone said. "Really working hard to grind at-bats, no matter the situation, and he continues to make strides there."

Of Torres' 26 career home runs the past two seasons, 13 have either given the Yankees a lead or tied the game.

Torres said one of the reasons he has had so much success in the clutch is that his focus remains the exact same at-bat to at-bat.

"I'm focused every time, but of course, when the game's on the line, I try to do my job," Torres said. "I feel a little bit more excited and just try to feel it really well when I'm trying to do my job. Helping my team, I think there's no better feeling than that."

As for A-Rod's batting gloves, look for them when the Yankees play the O's again Saturday. Torres said that while his customary gloves likely will be shipped to Baltimore by then, he won't be wearing them.

He isn't planning to give up the lucky No. 13s anytime soon. And after a day like this, why would he?

More in this category: Real or not? Jose Altuve could be MVP again »