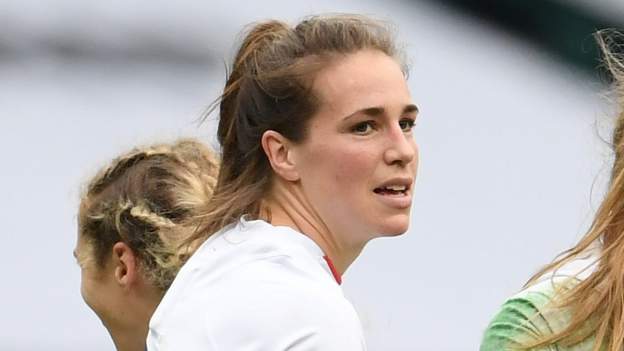 England match-winner Emily Scarratt says she felt under extra pressure before landing an injury-time kick to secure a thrilling win over France.

Scarratt, who came off the bench as a second-half replacement, put over a penalty with the final act of the match to seal a 25-23 victory at Twickenham.

"It was a relative sitter but the pressure adds a little bit more to it," she told BBC Sport.

The win secured a 2-0 series success over France, following on from last week's 33-10 success in Grenoble.

England trailed France by 13 points with 10 minutes remaining, but fought back with tries from number eight Poppy Cleall and full-back Ellie Kildunne before Scarratt landed the final penalty.

"We pride ourselves on our strong start and perhaps we didn't really get that," added Scarratt.

"[Coach] Simon Middleton said at the end that you can't coach character. We had to test ourselves in a different way, coming from behind, digging into those reserves."

England have been drawn against France in the pools for next September's Rugby World Cup and Middleton believes they will take lessons from the victory into that campaign.

"This group found a way today, which is amazing," he said.

"We'll learn more from that than winning easy or even staying in front all the way through a game."

Saturday's match was the final game of England's autumn programme.

The top-flight Premier 15s season is under way although the teams are playing amended rules featuring 35-minute halves and fewer scrums to reduce exposure to coronavirus.