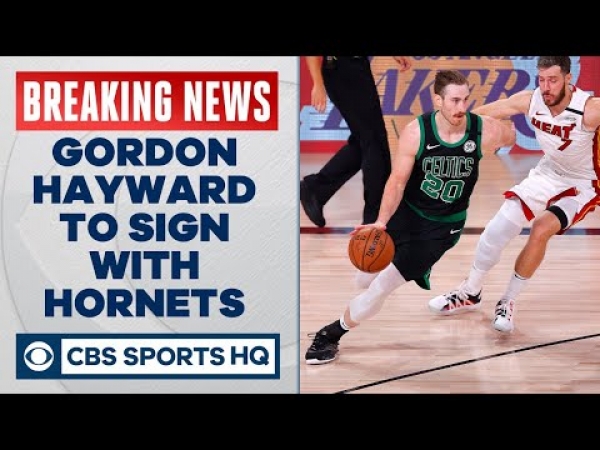 Gordon Hayward TO SIGN 4-YR $102 MILLION deal with the HORNETS | CBS Sports HQ
Gordon Hayward has reportedly found a new NBA home. The veteran forward is signing a four-year, $120 million dollar deal with the Charlotte Hornets, according to ESPN's Adrian Wojnarowski. Hayward had a player option for $34.1 million with the Boston Celtics for the 2020-21 NBA season that he turned down earlier this week in favor of free agency. In order to make space for Hawyard's new deal, the Hornets will waive Nic Batum, per Rick Bonnell of The Charlotte Observer. Charlotte will be Hayward's third NBA home after stints with the Jazz and Celtics. Charlotte's interest in Hayward isn't necessarily new, as he signed an offer sheet with the Hornets in 2014 as a restricted free agent, but the Jazz ultimately matched the offer and kept him in Utah. Hayward went on to sign a four-year, $128 million deal with the Celtics in 2017. The Indiana Pacers and New York Knicks were also both reportedly interested in signing Hayward. SUBSCRIBE TO OUR CHANNEL: https://www.youtube.com/user/CBSSportsHQ FOLLOW US ON: Facebook - https://www.facebook.com/CBSSports/ Instagram - https://www.instagram.com/cbssports/ Twitter - https://twitter.com/CBSSports #NBA #FreeAgency #GordonHayward #Hornets #Celtics #Superstar #Contract #Basketball #FreeAgent
Read 3 times
More in this category: « Valentina Shevchenko previews her UFC 255 matchup vs. Jennifer Maia Montrezl Harrell, the newest Laker, talks about his role »