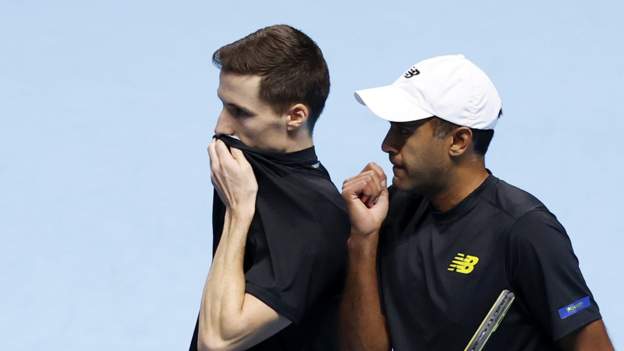 Briton Joe Salisbury and American Rajeev Ram agonisingly missed out on the doubles final of the ATP Finals and the world number one ranking.

Australian Open champions Salisbury and Ram also had a match point in the tie-break but were denied.

Victory would have meant ending the year as the top pairing after a season featuring their maiden Grand Slam title together as well as a US Open semi-final and French Open quarter-final.

Having won a tight first set, Salisbury and Ram broke in the first game of the second and were comfortable.

But Ram missed a simple volley on serve which would have given them a 3-1 lead and their opponents won five games in a row en route to winning the set.

The British-American pair dominated the early exchanges of the tie-break but France's Roger-Vasselin and Austrian Melzer produced a remarkable comeback, sealing victory on their first match point when Melzer hit a winner between Ram and Salisbury at the net.