De Ligt, De Jong and Depay are the building blocks for a new, elite Dutch team. Next stop: Euro 2020 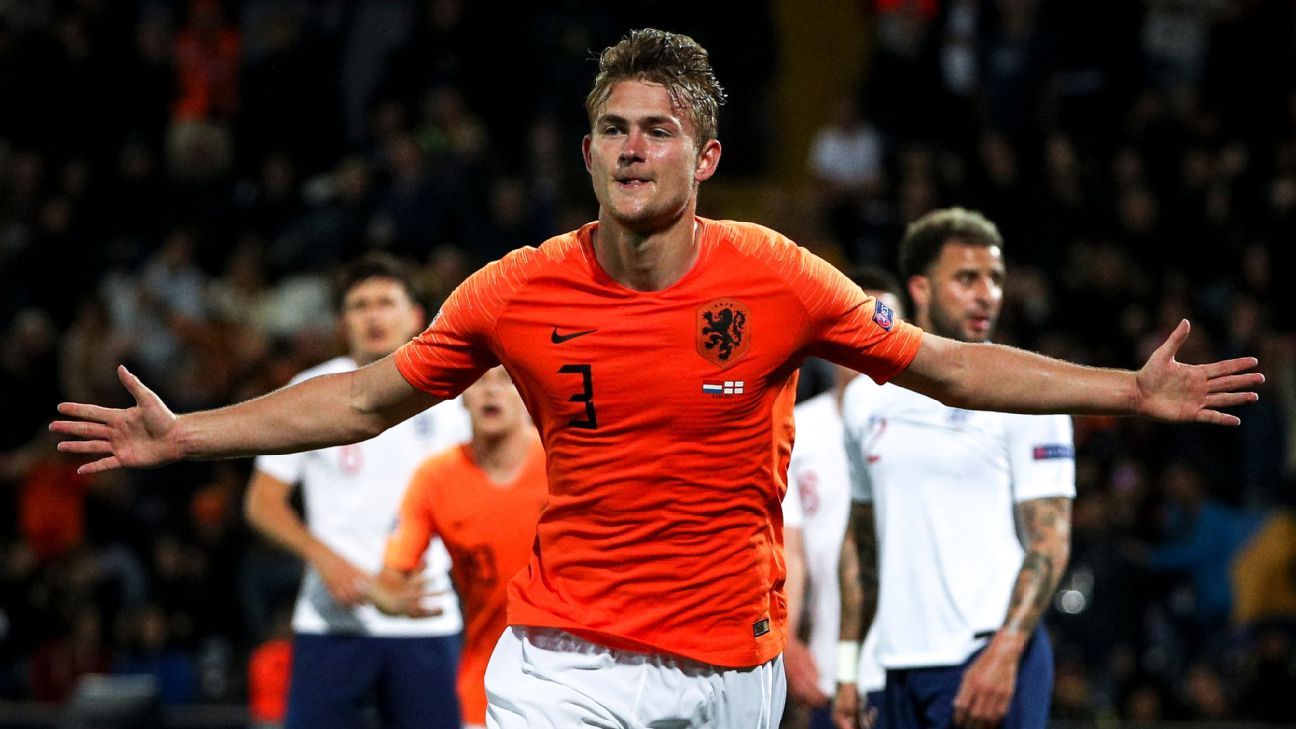 In 1977, Johan Cruijff's Dutch team came to Wembley and England fielded five players whose natural position was center-back. Oranje fooled them by playing without a center-forward: Cruijff dropped into midfield and set up both goals in a 0-2 victory. Times change, but England doesn't, at least not very much. Early in Thursday's Nations League semifinal, Memphis Depay retreated from center-forward to midfield. He and his teammates found space between the rigid lines of England's defense and midfield, and the Oranje won 3-1.

As Cruijff once said, football is a game you play with your head.

On Sunday, the Dutch face Portugal in the final of the inaugural European Nations League (2:45 p.m. ET, live on ESPN). That's quite a turnaround after four dreadful years in which they couldn't even qualify for Euro 2016 or the 2018 World Cup. Watching those orange shirts buzz around the chilly field in the small Portuguese town of Guimaraes evoked memories going back decades. Oranje is part of football's heritage, and it's not just Dutch fans who are happy the team is back. This isn't yet a vintage Oranje side, but it is about two-thirds of one. Given that the only outfield player in his 30s is the nonessential winger Ryan Babel, there's plenty of room to grow.

When Ronald Koeman's first match as Dutch manager ended in a sad 0-1 defeat to England in March 2018, even he didn't realise how much talent was about to arrive. Matthijs de Ligt played in that game, aged 18, but wasn't yet the world's most coveted young defender, routinely linked with big moves to the sport's biggest clubs. Frenkie de Jong, Steven Bergwijn and Donny van de Beek hadn't yet made their Dutch debuts by that point, while Virgil van Dijk was just starting to prove himself at Liverpool.

The core of this Dutch team is built from the two clubs that lit up this season's Champions League, Liverpool and Ajax. Van Dijk and De Ligt are in central defense, just behind their club teammates Georginio Wijnaldum and De Jong. Ahead of them, Ajax's "master presser" Van de Beek helped Oranje score three goals after he replaced Marten de Roon on 68 minutes.

The embodiment of both Holland's brilliance and its shortcomings is De Ligt. Being chased by every big club in Europe must surely be a distraction, but his blunder against England -- mishandling a pass, turning so slowly that Marcus Rashford got ahead of him and finally diving in with his "wrong" leg to concede a penalty -- wasn't a one-off. A heavy-footed De Ligt was at fault for two of Germany's goals in the 3-2 defeat in March; he also collided with a teammate to leave Cristiano Ronaldo unmarked for an easy Juventus goal against Ajax in April.

The bloopers on his highlights reel must make Barcelona or Bayern Munich wonder whether he is ready yet. As Koeman says, people sometimes forget De Ligt is only 19. Yet his response to his blunder showed extraordinary resilience. Koeman noted that on his next touch, he dribbled past an Englishman and barely made another mistake all game. He also smash-headed in a corner for Holland's equaliser, after heading in corners against Germany, Juve and Spurs this spring. Thanks to him and Van Dijk -- and Van de Beek, who blocked De Ligt's marker on the corner -- the Oranje now rival England as the world's best aerial team.

The team's transformative player may be another youngster, De Jong. Only nine months after his debut against France, in which he kept dribbling past Antoine Griezmann for fun, it's already hard to imagine Oranje without him.

De Jong isn't simply the best Dutch creator to have emerged since Wesley Sneijder 16 years ago, he is also a marvellous defensive player. When Oranje lose the ball, he slots in as a third center-back, tackling opponents and intercepting passes purely on timing. He is also always available for a pass, no matter how many men the opponents dedicate to closing him down, and since it's beneath his honour ever to boot clear no matter how dangerous the situation, he can play his team out from a press. With him orchestrating Dutch passing, England spent much of the game chasing the ball. He had more touches (128), passes (105, with 96 percent accuracy), tackles (five) and recoveries (13) than any other man on the field, according to data providers Opta.

"I want to touch the ball a lot," he said, receiving the man of the match award with his usual broad grin. Unlike plenty of footballers, De Jong loves playing football. He embodies the cheeriness of this team, which Koeman says was partly modelled on the Dutch women's team, who are the European champions. And there are ever more reasons to be cheerful.

Oranje's other central midfielder, Wijnaldum, has quietly improved month by month until, at 28, he appears to be the complete all-rounder. On Thursday, five days after he played the Champions League final, "it looked as if he was the fittest of the 22 players by the end," murmured Koeman in disbelief. Wijnaldum and Van Dijk can now win their second final in eight days.

A combination of VAR, awful England defending and clinical finishing saw the Netherlands set up a UEFA Nations League final clash with Portugal.

One player to look out for on Sunday against Portugal is PSV's 21-year-old winger Bergwijn, whose dribbles discomfited England's defense. He is little-known outside the Netherlands largely because few foreigners follow PSV, but there's a reason why Manchester United and Spurs are reportedly watching him, and why Ajax has bid for him.

For now, though, Oranje's key forward is Memphis, a No.9 and No.10 rolled into one and the focal point of a team that aims to attack through the middle. Of the nine Dutch goals in 2019 so far, he scored or assisted eight; the other was the second goal on Thursday for which he pressed and dispossessed John Stones and forced a save from Jordan Pickford before Promes netted the rebound off Kyle Walker. Oranje's last goal came from Promes pressing Ross Barkley. This team doesn't press as rapidly or constantly as Ajax or Liverpool, or the great 1970s-era Holland, but the knowhow is there.

Of course, it would be foolish to get too carried away. Oranje could easily have lost to England -- Jesse Lingard's late strike was ruled offside by mere inches -- and is still at least three players short of a strong side.

Babel, De Roon and right-back Denzel Dumfries in particular don't quite belong in a team that can boast De Jong and Van Dijk. England left Dumfries unmarked, trying to cajole Oranje into passing to their least skilful player, but the Dutch refusal to give him the ball even when he was free 20 yards from England's goal was by turns comical and embarrassing. Dumfries' poor defensive positioning also repeatedly spoiled the Dutch offside trap, but to be fair, Oranje has been waiting years for a top-class right-back.

In the short term, Van de Beek for De Roon could prove an upgrade of an already highly functional midfield, while Babel may give way to Promes. Still, even ordinary Dutch players learn how to use their intelligence to disguise their weaknesses: that's how Oranje were able to reach the 2010 World Cup final with a back five consisting of Maarten Stekelenburg, Gregory van der Wiel, Joris Mathijsen, John Heitinga and Gio van Bronckhorst. It's also how today's national team can keep bouncing back after falling behind, as they did on Thursday, but their resilience extends beyond spirit: this team, and its coach, can switch formations and learn during a game. Their notable victims since October now include France, Germany and England, plus a tie in Belgium.

Netherlands vs. England was much the better of the UEFA Nations League semifinals. At times, Portugal vs. Switzerland looked as if Cristiano Ronaldo had accidentally wandered into a Europa League match. His hat trick settled the match, but Koeman remarked that "as a team, I thought Switzerland was better."

Koeman was the sweeper in defense when Oranje won the only prize in its history, at Euro 1988. If his 2019 team adds a second trophy on Sunday, he will consider it to be just the start of a new Dutch era.

More in this category: « Ramsey has played last Arsenal match - Emery MLS W2W4: Red Bulls' run to continue in Philly? »
back to top