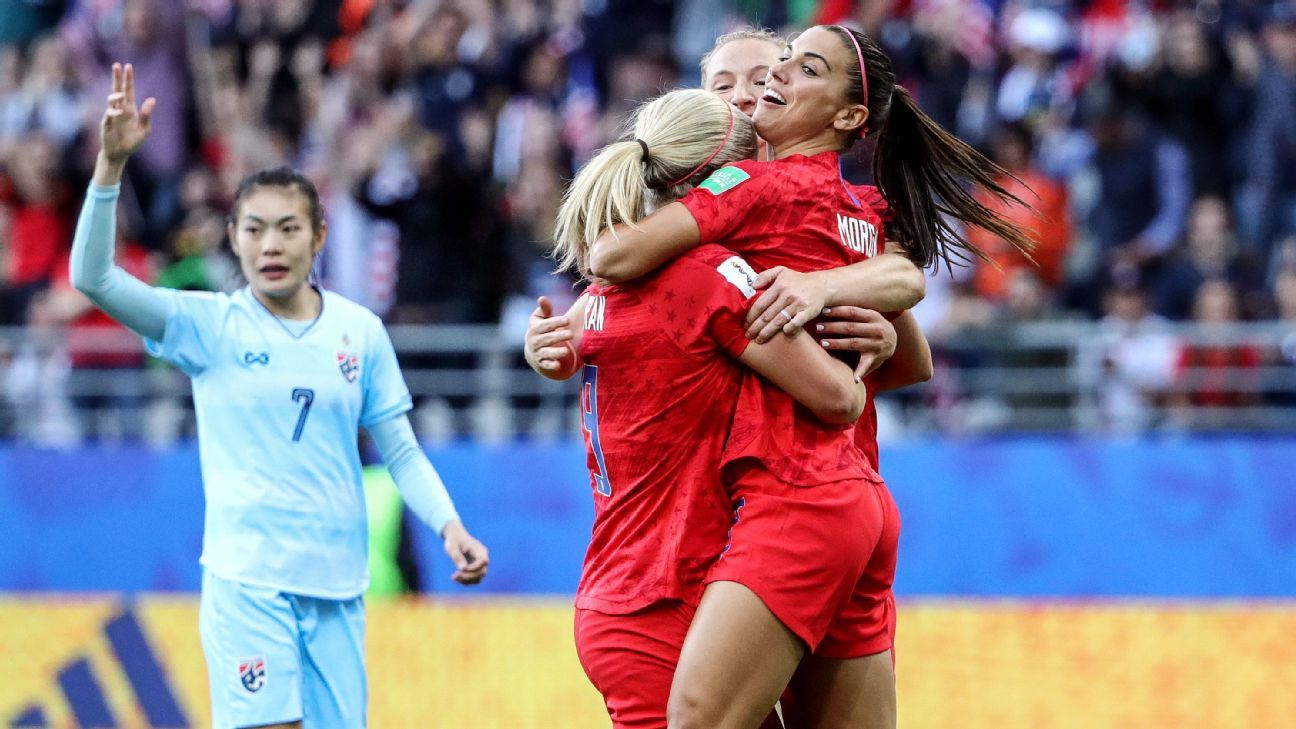 Alex Morgan scored a record-tying five goals as the United States opened its Women's World Cup campaign with a tournament-record 13-0 win over Thailand in Group F on Tuesday in Reims, France.

After the match, manager Jill Ellis defended her team's aggressive style of play even late in the match when result was beyond doubt.

"This is a world championship, so every team here has been fantastic to get to this point. And I think that to be respectful to opponents is to play hard against opponents. It's a tournament where goal differential is important," Ellis said.

"When you get a deluge of goals like that, it's a good feeling. It builds confidence."

The pre-tournament favorites and defending champions took it right to Thailand in the opening minutes, with a Morgan goal ruled out for offside inside of 10 minutes.

Minutes later, Morgan's second strike would stand up when she found space in between two Thai defenders and headed home a Kelley O'Hara cross to put the U.S. up 1-0.

Rose Lavelle doubled the lead for the Americans before the 20-minute mark, picking up the ball just inside the attacking third, dribbling to the top of the penalty area and smashing a swerving shot past Thailand keeper Sukanya Chor Charoenying.

A set piece led to the third goal for the U.S. just past 30 minutes, as Lindsey Horan hit her close-range shot into the roof of the net. Thailand was lucky to not concede another before the break, with Ellis' team continuing to dominate the match and keep their opponents under constant pressure.

The U.S. picked up right where it left off in the first half after the break, scoring four goals in just over 10 minutes.

Sam Mewis, who started in midfield after Becky Sauerbrunn was held out for precautionary reasons with an injury, started things off in the 50th minute before Morgan, Lavelle and Mewis all added their second goals to make it 7-0.

Morgan scored her third and fourth as the match approached full-time, and Megan Rapinoe added another on the counter-attack in between to put the U.S. up 10-0.

"Obviously we have the utmost respect for everyone we play, but it's the World Cup," said team captain Rapinoe.

Substitute Mallory Pugh then scored to put the U.S. up 11-0 and Morgan added her fifth goal of the night to join compatriot Michelle Akers as the only two women to score five in a single match at the World Cup.

Veteran Carli Lloyd then added a 13th goal of the night for the U.S. to reach the final scoreline and give the Americans a record for both margin of victory and goals scored, surpassing Germany, who beat Argentina 11-0 in 2007.

Thailand, ranked No. 34 in the world, was clearly outmatched even though the team has shown progress on the world stage. Making its World Cup debut in 2015 four years ago, Thailand finished third in its group but earned its first win, a 3-2 victory over Ivory Coast.

At the final whistle, Lloyd and Christian Press were seen consoling the Thailand goalkeeper. Morgan put her arm around an opponent, who was wiping away tears on the pitch moments after the final whistle.

"They were disappointed of course, they intended to make an impression in this first match and they were disappointed," coach Nuengruethai Srathongvian said through a translator. "Yes, they are all athletes and they will be resilient. We've got two more games to play and we need to bounce back."

The group-leading U.S., who had a 39-2 shot advantage to improve to 6-0-2 in World Cup openers, next faces Chile before playing Sweden in its last match before the knockout rounds begin.

Sweden, who defeated Chile 2-0 earlier on Tuesday in Rennes, ousted the U.S. in the teams last meeting in the quarterfinals of the 2016 Olympics in Brazil.

Information from the Associated Press was used in this story.