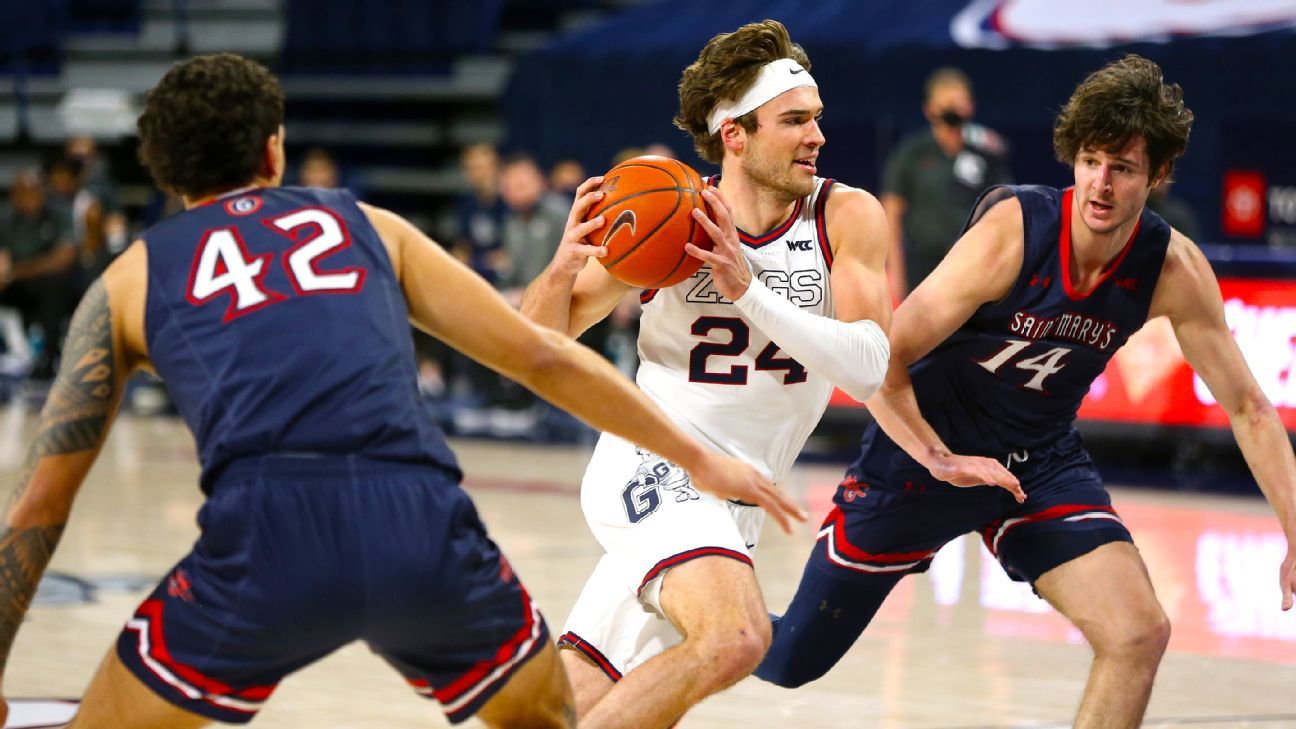 Gonzaga's bid for a wire-to-wire run at No. 1 keeps chugging along.

Baylor is still right there with the Zags.

Gonzaga received 60 first-place votes from a media panel in The Associated Press men's college basketball poll released on Monday, picking up one vote from last week. The second-ranked Bears received the other four first-place votes in a week of little change.

Gonzaga and Baylor have been 1-2 all season.

Michigan, Ohio State and Illinois rounded out the top five for the second straight week. The Buckeyes held their ground despite losing 92-87 to the Wolverines on Saturday.

Gonzaga has won 26 consecutive games after blowing out San Diego 106-69 on Saturday and hasn't really been tested despite playing one of the nation's toughest schedules.

"We're just becoming more mature and understand that just winning these games doesn't necessarily mean we're going to get a guaranteed national championship," guard Andrew Nembhard said. "We have to raise our level and keep improving every day so that's what we've been trying to do. It's kind of shown in our play lately."

Baylor (17-0, 9-0 Big 12) held its season-long spot at No. 2 despite having three more games postponed due to COVID-19 issues. The Bears have not played since beating Texas on Feb. 2 and have had eight games postponed this season.

Baylor is scheduled to play Iowa State on Tuesday.

Alabama moved up two spots to No. 6 this week, its highest ranking since reaching No. 4 in 2006-07. The Crimson Tide have won three in a row since losing by three to No. 24 Missouri.

Alabama is within reach of its first Southeastern Conference regular-season title in 19 years after rallying to beat Vanderbilt 82-78 on Saturday.

The Crimson Tide are 13-1 in SEC play, 3½ games ahead of No. 20 Arkansas and LSU. Alabama plays at Arkansas on Wednesday.

The Hawkeyes, the preseason No. 5, dropped out of the top 10 for the second time this season on Feb. 8 but moved back in this week thanks to a four-game winning streak. Iowa beat No. 23 Wisconsin and Penn State last week.

The Mountaineers spent three weeks in the top 10 before dropping out on Dec. 28. West Virginia knocked off No. 14 Texas 84-82 on Saturday to move up three spots in this week's poll.

Kansas is climbing after seeing its record run in the AP Top 25 end two weeks ago.

The Jayhawks have won five in a row, including a six-point win over No. 18 Texas Tech last week, and moved up six spots to No. 17 in this week's poll. Kansas returned to the poll last week after dropping out on Feb. 8, ending a stretch of 231 consecutive weeks in the AP Top 25.

More in this category: « Rangers' Panarin takes leave following allegations Tiger transferred to Cedars-Sinai in Los Angeles »
back to top