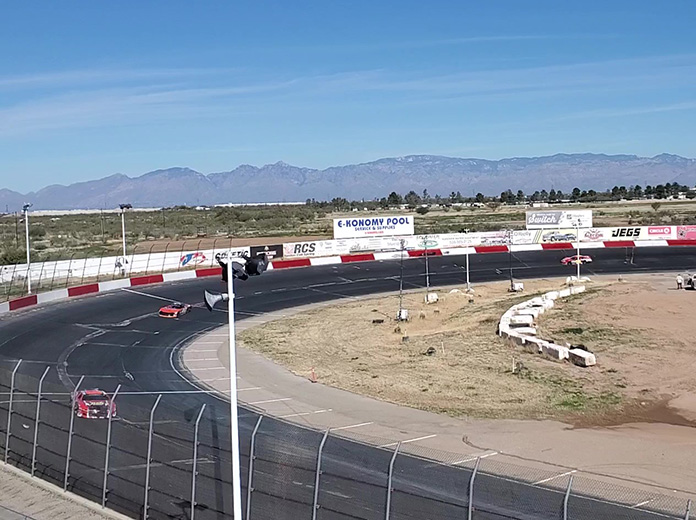 TUCSON, Ariz. – Since its inaugural running in 2014, the Chilly Willy has quickly become an annual pilgrimage for pavement short-track racing enthusiasts and racers to find a competitive blend and warm solace amidst the frigid winter across much of the country.

The speedy super late models have headlined since the beginning, extending from 100 laps in distance to 150 around the variable-banked three-eighths-mile oval starting in 2016.  In 2019, the event was expanded to three days with feature racing for multiple divisions offered as part of each day’s program.

In anticipation for the 2021 edition, here is a look at some key numbers to keep in mind, looking back at the history of the Chilly Willy and sharing a potential glimpse at what could be seen in the coming days.

0.005 – The official margin of victory at the finish of the 2015 Chilly Willy when Tayler Riddle barely edged fellow Washington counterpart Jason Jefferson.  Some additional years have come down to the last the corner of the last lap (0.807 seconds is the average margin of victory for the six editions in which the data is documented) so be sure not to blink when the Super Late Models flash across the start-finish line to take the checkered flag.

15.263 – Preston Peltier’s qualifying lap for 2020’s Chilly Willy 150, quicker than any previous fast time in years past. Can another super late model eclipse that time in 2021?

The Chilly Willy’s predecessor from the 1990s, Winter Heat, always boasted a foundation of drivers from a diverse amount of locations. That tradition continues each year in present-time at Tucson Speedway, as 13 different states are represented among those that are currently pre-registered across both the super late model and Legends divisions.

It’s not only the immediate neighboring and regional locations. Teams from Texas, Idaho, Washington, Oregon, Wisconsin, North Carolina, Wyoming and one other of interest that will be detailed later will be making the trip. Normally there are even a few friends from north of the border, such as British Columbia Canada’s Darrell Midgley who is tied with the most Chilly Willy super late model starts with six, but unfortunately they will not be able to trek down this year and will certainly be missed.

The highest number of represented individuals from a given state across both super late model and Legends divisions is 17. Despite it being approximately a 12 hour drive, the Colorado contingent constantly looks to jump-start their season which doesn’t typically get going locally for another two months, and have displayed a great amount of success in the past.

Chris Eggleston is one of those Colorado drivers, having captured the 2018 Chilly Willy 150 and being the defending Legends main event winner.  He and 2019 winner Michael Scott look to be the only two drivers expected to be in attendance that can end the streak of seven different super late model winners in as many years as the event has taken place.

Forty-five percent of pre-entered drivers across both divisions intend to make their inaugural Chilly Willy weekend start. Most are within the Legends class, which is only in its second year of competition as part of the annual festivities. Two of the first-time Tucson super late model were recently highlighted regarding their efforts leading into the weekend.

The number two bears significance in numerous ways. Two drivers that are pre-registered in the Legends division have previously finished second on Chilly Willy 150 race day. Colorado’s Darrell J. Stewart was a frontrunner in two classes last year and took home trophies from the preliminary nights. While the super late model he was driving did not make it to the finish in the end, he did earn a runner-up result in the Legends feature and will look to do one better in 2021.

Dane Nissen turned some heads two years ago by finishing second in the super late model main event, but this year will be focusing on his Legends car. He is one of two drivers that calls Redwood Acres Raceway in Northern California their home track and will be on the road for at least 1,000 miles before reaching the Tucson Speedway destination.

Two drivers from the same family have conquered the season-ending Turkey Shoot 125 at Tucson Speedway and will continue in their quest to be a Chilly Willy 150 winner.  Brett Yackey has won that event two of the last three years and his father Bruce Yackey took the victory the year in between. The Greeley, Colorado-based team will definitely be one to watch.