Erik Karlsson signs with the Sharks: Biggest takeaways around the NHL 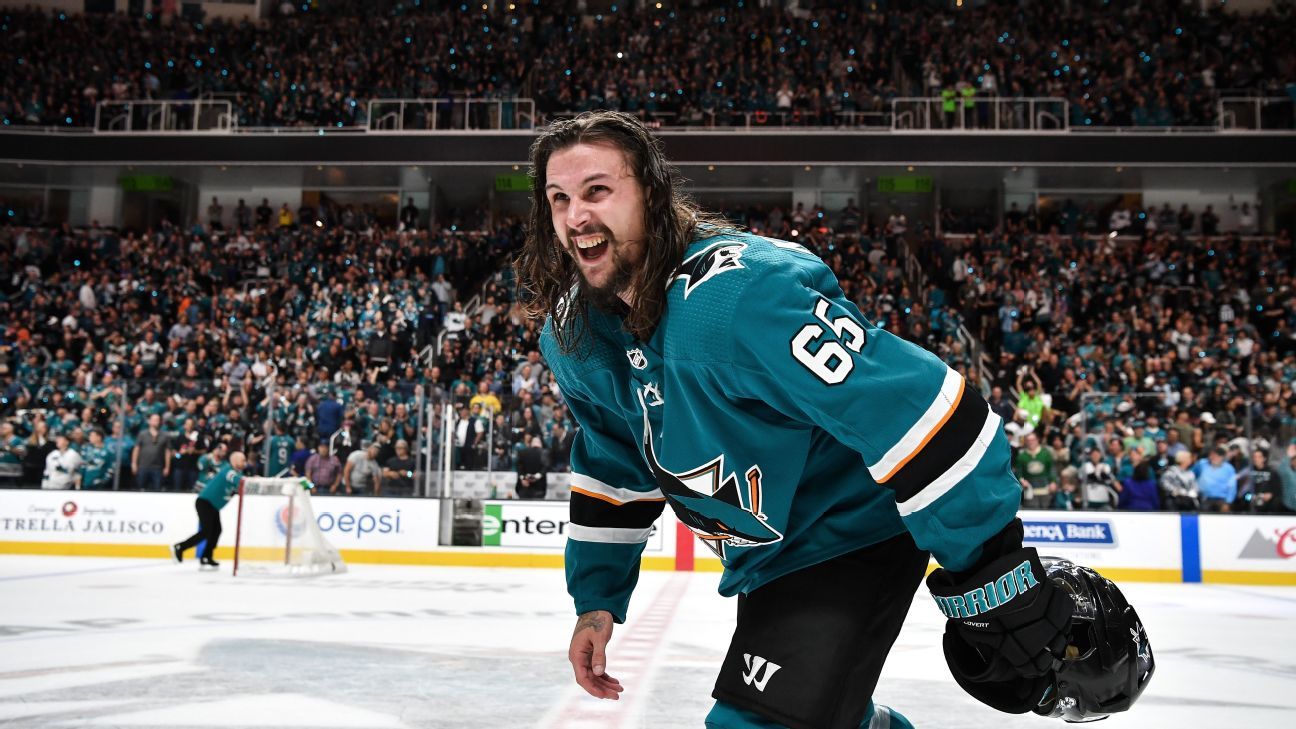 The San Jose Sharks and defenseman Erik Karlsson, 29, have reportedly agreed to a deal on an eight-year contract, that will play him more than $11 million per season.

The term and average annual value raised some eyebrows around the league, and the end of the Karlsson Sweepstakes has set dominoes falling in a number of different directions. You've got questions on the deal and its aftermath, and we've got answers:

Was this a surprise?

Somewhat. The Sharks had a few things going for them in the pursuit of Karlsson. Financially, they were in a great position: No one was going to outbid them for Karlsson, as GM Doug Wilson had the full backing from an open-wallet ownership to aggressively bring him back. Plus, the Sharks were the only team that could offer him eight years; as an unrestricted free agent, the highest another team could go was seven years due to the current CBA. He clearly enjoyed his time in San Jose, both from a lifestyle perspective and in bonding with teammates. And while the Sharks are very much a veteran team, their window to win the Stanley Cup remains open.

The main reason many thought Karlsson could leave was geography, with he and his wife desiring to move back East. There was also the thought that Karlsson might like to play with Victor Hedman in Tampa or Henrik Lundqvist in New York.

So kudos to San Jose: They had a year to sell him on the organization, and they sold him. Although as one former Sharks player told ESPN this week: "San Jose sells itself."

How does that money stack up?

Drew Doughty of the Los Angeles Kings was the highest-paid defenseman in the NHL before this contract, making $11 million against the cap over the next eight seasons, signing that deal last July 1. Doughty made news in 2017 when he said he'd talk with Karlsson to "see what money he's looking for." Turns out it was Doughty that set the market.

Elliotte Friedman of Sportsnet said that Karlsson's deal would be for the same percentage of the cap as Doughty's, who was at 13.8 percent when he signed. That would mean a cap hit around $11.45 million annually for Karlsson, which would put him third in the NHL behind Connor McDavid ($12.5 million) and Auston Matthews ($11.634 million), both of whom are centers and significantly younger than Karlsson. Bob McKenzie of TSN sees the AAV around $11.5 million.

Karlsson is 29 and battled through injuries in the last year. Isn't this risky?

There's nothing the Sharks can do about age. There was something they could do about his wonky groin, which was an injury he suffered during the season and that severely hampered him as the playoffs progressed. He had surgery to repair it on May 31, and immediately started to rehab it.

"All I know is it's not going to be anything that will be a problem moving forward," Karlsson said after the Sharks' season ended in the Western Conference final, to eventual Stanley Cup champion St. Louis. "I'm going to be able to have a normal summer with training and everything and getting ready. That's great. It's just unfortunate it happened when it did."

Again, fears about his fragility are legitimate -- he played 124 out of a possible 164 games in the past two seasons -- especially if these groin issues are systemic, given that skating has always been his greatest asset. He'll be 37 at the end of this contract.

That said, is it worth the risk for the Sharks?

Absolutely. Look, the window is now for San Jose. Joe Pavelski, a 34-year-old unrestricted free agent, is expected back. Joe Thornton, 39, is expected back. Brent Burns is 34. Marc-Edouard Vlasic is 32. Logan Couture is 30. This team was good enough to get to the conference final with a diminished Karlsson. Given their roster, and the improvements of conference rivals, having Karlsson back on the roster exponentially increases the chances they can get there again.

In some ways, Wilson's vision was never realized despite Burns and Karlsson gobbling up 55 minutes per game between them in the playoffs. Yes, the term is scary. But to get the player, they had to hand eight years to him. And in getting the player, that elusive first Stanley Cup may still be in reach for the Sharks.

It will require some maneuvering. They had 15 players signed and $24,042,583 in cap space before Karlsson came back, according to Cap Friendly. If Thornton and Pavelski come back as well, that'll eat into the space, but more importantly will only give San Jose nine forwards under contract. Among the RFAs that need new deals: Forwards Kevin Labanc, Timo Meier and Dylan Gambrell. Among the team's other UFAs: Joonas Donskoi and Gustav Nyquist. One assumes both of the latter are gone unless they agree to a deep discount. (And in Nyquist's case, that would solely be to challenge for a Cup in San Jose.)

More than likely, the Sharks might have to open some space by dealing either Brenden Dillon ($3.27 million) or Justin Braun ($3.8 million). Wilson is going to have to make this work somehow; most likely, other teams are going to benefit from this cap crunch.

Which teams does this signing most affect from a free-agent perspective?

It's hard to know exactly what the derby for Karlsson would have looked like this summer. We know the Vegas Golden Knights and Dallas Stars were both in pursuit of Karlsson before the Ottawa Senators traded him to the Sharks last summer. The Tampa Bay Lightning and Karlsson were paired ever since he trounced around the city with Victor Hedman -- dressed as pirates! -- during the 2018 All-Star weekend. Financially, it would have been a challenge to get him in, however. The Rangers had also been rumored as a possibility. One assumes some of these teams will redouble their efforts to land someone like Jets defenseman Jacob Trouba.

But in a weird way, the signing affects Ottawa more than anyone else.

Wait, how does this affect the Senators?

The Senators actually get a second-round pick in the 2021 NHL draft since the Sharks signed Karlsson. Incredibly, that pick would have upgraded to a first-rounder had the Sharks made the Stanley Cup Final this year -- the Senators were just two San Jose wins away from that.

How does this deal affect the summer trade and free-agent market?

With apologies to Tyler Myers and Alexander Edler, there isn't an unrestricted free agent defenseman anywhere near Karlsson's talent and impact. So if teams are looking for that kind of player, the trade route is the only way to go.

One imagines the price tag (and the market) for Jets RFA defenseman Jacob Trouba has grown. One imagines business might be picking up for teams like the Anaheim Ducks, Nashville Predators and Carolina Hurricanes, who all have a surplus of defensemen from which to deal.

How does this affect other defensemen?

There are a few big-name defensemen on the runway for new deals, facing unrestricted free agency in summer 2020: Alex Pietrangelo of the Blues (current cap hit of $6.5 million), Torey Krug of the Bruins ($5.25 million), Justin Faulk of the Hurricanes ($4,833,333) and, perhaps most notably, Roman Josi of the Predators, who has been underpaid at a $4 million in AAV since 2013.

While these defensemen may not command north of $11 million annually, the rising tide of Karlsson and Doughty should lift some boats.