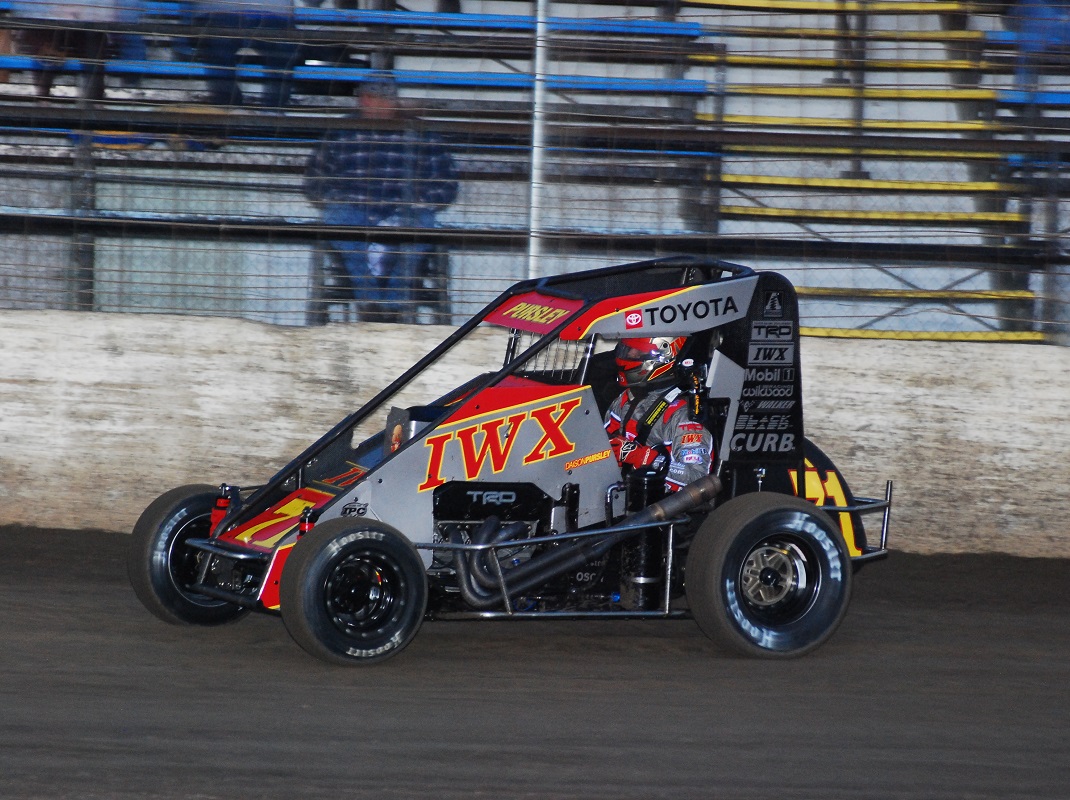 COLUMBUS, Ind. — When Daison Pursley joined Keith Kunz/Curb-Agajanian Motorsports two years ago, he was a fresh-faced, 14-year-old youngster who hoped to begin making his name in racing.

Fast-forward two years and not only is Pursley’s name starting to become recognizable, but he’s also gained another title within the KKM stable — veteran.

Odd as it may seem, Pursley is the most-tenured driver within the Keith Kunz-owned stable this year, in the midst of his third season with the venerable midget team as part of the Toyota driver development program.

His older teammates — 19-year-old Buddy Kofoid and 20-year-old Kaylee Bryson — are each in their second years with KKM, while fellow teenagers Brenham Crouch, Bryant Wiedeman and Cade Lewis are all running full seasons with the organization for the first time.

That leaves Pursley as the driver on the team with the most experience working with the Columbus, Ind., stable at only 16 years of age.

Pursley admitted it’s a unique position for him to be in, as well as an odd one to think about at times, but the Locust Grove, Okla., native also appreciates the chance he has to guide some of his teammates. It’s an opportunity hebelieves can help mold him into a leader within KKM.

“It’s weird, isn’t it? I’m pretty much the veteran at KKM now, even though it’s only my third full-time year,” Pursley told Sprint Car & Midget. “When I’m only 16 years old, it almost trips you out a little bit, but it’s very true that I am the one there with the most experience working around the guys in the shop. I’ve enjoyed it, but we’ve also started to change things up just a little bit to keep things fresh as well. I think, after a while, you kind of have to do that just to see what else you can get going that works.

“Buddy and I have had the same crew chief (Jarrett Martin) since last year and always parked beside each other and leaned on each other pretty hard, but last month in Texas (during the POWRi opener at Monarch Motor Speedway), we switched it up and I switched over to Kaz (Townsend) as my crew chief, so that was a little bit different,” Pursley added. “But I think different can also be good. I felt like I could be a leader of the team [in that position], and Buddy and I still have a good friendship off the track.

“I think going forward, it’s going to be even more competitive between us every time we hit the track.”

Six months ago, the idea of Pursley stepping up as one of the main players for veteran car owner Keith Kunz might have seemed somewhat far-fetched, as Pursley had yet to capture a national midget victory and seemed somewhat snakebitten within the discipline.

His confidence was, admittedly, somewhat lacking and Pursley wasn’t sure if the breakthrough win would come. However, after he captured last season’s POWRi finale, all of those doubts were washed away.

That, Pursley said, was the moment he felt a coming of age as part of Kunz’s midget operation.

“That win last year got the monkey off my back, I feel like,” Pursley tipped. “The first one, like everyone said, was the hardest to get. It took us a full season or two of POWRi, basically, to get the win … and then a full USAC season. It was pretty cool, but I did wonder sometimes what it would take for us to actually get one knocked down. Now, I feel like my confidence is there and the whole team is really, really strong right now. Everyone’s in a good mood and we’re hitting on all cylinders, so that kind of makes it easier to run up front and have fun with everybody.

“When you’re having fun, the wins seem to come easier,” he continued. “I think a lot of Keith’s [well-known] drivers have proven that through the years. We know Buddy’s going to be hard to beat every time he’s in the car and I know that right now, he’s kind of the guy to beat [in midget racing]. I’m honestly tired of running second to him, it seems like, every time we race with him. Hopefully, we can change that up and start rattling off a few more wins here soon because all the guys working on my race cars deserve that.”

As he looks ahead toward the later stages of the year, Pursley admitted a possible transition toward pavement is on his mind. How could it not be? After all, the young gun has watched Kyle Larson, Christopher Bell and more use KKM as a springboard to successful NASCAR careers since he was young.

With Kofoid now doing the same after recently dipping his toe into the waters of late model racing, Pursley knows his time is now to make a statement for the future.

He believes he can do that, not just by winning midget races, but by growing his footprint with KKM.

“You want to prove you can take that next step, right?” Pursley said. “It’s not only about winning races, but by learning the skills you need to be successful in the sport beyond just midget racing. I feel like Keith, Pete [Willoughby, KKM co-owner], everyone with Toyota and TRD and all our partners have done a lot to help get me ready for whatever is in my future and I’m excited for any opportunity that could come my way.

“I’m excited to, hopefully, make a statement this season and then see what the future holds after that.”

Pursley ranks second in POWRi points to Kofoid and eighth in the USAC standings through April 15.

He’ll return to action with the USAC NOS Energy Drink National Midget Series April 30-May 1 at Kokomo (Ind.) Speedway. An outing the week prior with POWRi in Missouri is possible as well.