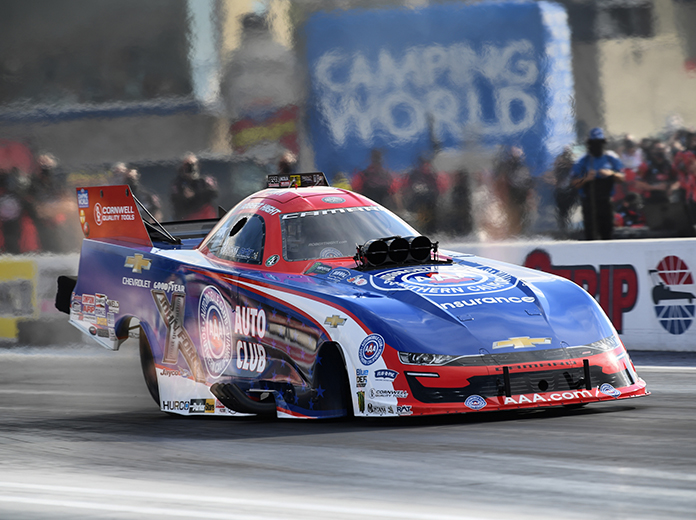 It is also the first four-wide race in the NHRA in two years and Hight didn’t waste any time jumping to the top spot, powering to a run of 3.922 seconds at 327.59 mph in his 11,000-horsepower Auto Club Chevrolet Camaro SS. If it holds, it would be his 69th career No. 1 qualifier. After racing to the runner-up spot at the season-opener in Gainesville, Hight was motivated to get back to racing in Las Vegas and that was apparent on Friday.

“I’m glad we’re back finally running a schedule that’s a little more normal,” Hight said. “A month off after a runner-up finish is not much fun because, honestly, I lost that as a driver in the final. J.R. (Todd) did a better job (in the final round at Gainesville), I’ve thought about it 1,000 times in my mind, and I’m ready to get back out there and start racing and redeem myself.”

Torrence rocketed to the No. 1 position in Top Fuel with a run of 3.741 seconds at 328.94 mph in his 11,000-horsepower Capco Contractors dragster in the final quad of the day. If it holds, it would give Torrence, who has won three straight Top Fuel world titles, the top spot for the second consecutive race and the 29th time in his standout career. Clay Millican sits second, seeking his first career four-wide victory, with a 3.788-second pass at 321.58 mph, while Shawn Langdon is third with his 3.796-second pass at 310.05 mph.

In Pro Stock, rising star Stanfield led the way and looks to track down his first No. 1 qualifier in the class. Stanfield, who picked up his first win in Pro Stock late last year, went 6.671 seconds at 205.66 mph in his Janac Brothers Racing Chevrolet Camaro to make the top run on Friday, putting him in prime position to finish in the top spot for the first time in his young career.

Points leader Greg Anderson, who won the opening race of the season, is currently second after going 6.683 seconds at 205.01 mph and second-year driver Mason McGaha is a spot behind with his run of 6.686 seconds at 205.41 mph in the same quad.

It was the Matt and Angie Smith show in Pro Stock Motorcycle qualifying on Friday, as Matt Smith took the top spot and his wife followed in second. It’s an ideal start for both considering it is their sponsor’s race, and Matt Smith continues to impress to open his campaign.

The defending class champion started the year with a win in Gainesville and ran well on his Denso Auto Parts/Stockseth/Matt Smith Racing EBR in Las Vegas, going 6.891 seconds at 195.96 mph. If it holds up, it would give Matt Smith his first top qualifier of the year and the 44th in his standout career. Angie Smith, who won in Vegas to close out the 2020 season, is currently second with a run of 6.909 seconds at 195.51 mph, and teammate Scotty Pollacheck is third thanks to his 6.939-second run at 195.17 mph.