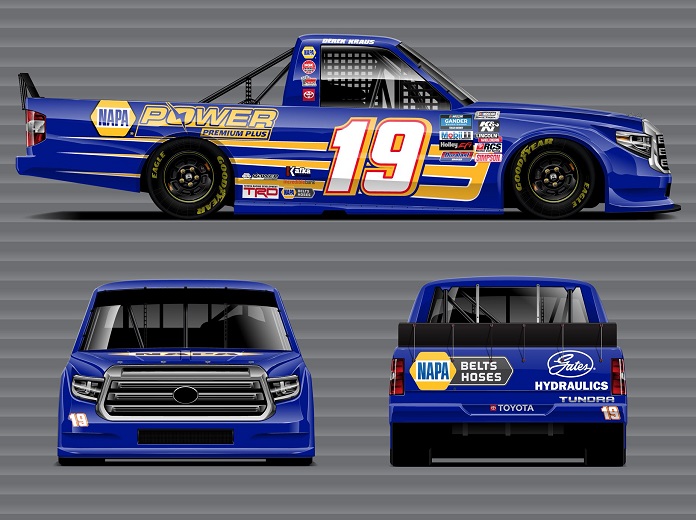 ROSEVILLE, Calif. – McAnally-Hilgemann Racing has announced the throwback paint scheme for Derek Kraus’ No. 19 NAPA Power Premium Plus Toyota Tundra at Darlington Raceway on May 7.

Kraus will carry the 2003 NAPA Auto Parts paint scheme that went to victory lane with Michael Waltrip in the Daytona 500 that year.

This marks the second year for Kraus and the MHR team to participate in the NASCAR Throwback Weekend at the 1.366-mile speedway, known as the Track Too Tough To Tame.

Kraus had a career-best performance at Darlington last year, with a second-place finish as a rookie in the 2020 Truck Series event there.

He returns to the South Carolina track driving a Toyota Tundra that commemorates the NAPA-sponsored Dale Earnhardt Inc. entry that Waltrip won with in the 2003 Daytona 500.

“We’re excited to celebrate this achievement by Michael Waltrip and NAPA,” said MHR co-owner Bill McAnally. “We’ve had a long partnership with NAPA Auto Parts that spans more than 30 years and we’ve had a long-term friendship with Michael Waltrip, as well. It’s great that we can honor them both with this throwback scheme at Darlington.”

NAPA’s relationship with Bill McAnally Racing dates back to 1990, when McAnally won the late model division championship as a driver in the NASCAR Weekly Racing Series at All American Speedway in Roseville, Calif.

The partnership has continued as McAnally’s racing program has expanded over the years.

McAnally partnered with Bill and Mona Hilgemann in forming McAnally-Hilgemann Racing at the beginning of 2020, to field an entry in the truck series on a full-time basis. The 2021 season marks McAnally’s 31st year with NAPA AUTO PARTS as a sponsor.

Throughout it all, he looks upon the relationship between the team and NAPA as a partnership. It’s been successful on and off the track, as they have worked together to develop various ways to use the racing program to market NAPA and its products.

Waltrip, who competed in nearly 800 NASCAR Cup Series races during his racing career, is a two-time Daytona 500 winner. In addition to his victory in 2003, he also won the prestigious event in 2001.

“Back when I drove for DEI, any time I went to Daytona or Talladega, I thought about Dale,” Waltrip said. “He inspired me and Dale Jr. more than people could ever imagine. So, getting the victory in the 2003 Daytona 500 was another tribute to Dale. What a great day that was.”

Waltrip’s affiliation with McAnally dates back to a West Series race at The Bullring at Las Vegas Motor Speedway in 2001, the year Kraus was born. Waltrip later competed for BMR in six series events between 2010 and 2014.

“It’s so cool that BMR is celebrating my 2003 Daytona 500 win,” Waltrip said. “No one knows more about the accomplishments of NAPA Racing better than Bill McAnally. We go way back. I love Bill. His passion for NASCAR is second to none.”

“The throwback weekend at Darlington is a fun event for everyone involved,” Kraus said. “It’s great to recognize past accomplishments in our sport with these vintage paint schemes. We’re glad to have the opportunity to commemorate the Daytona 500 win in 2003 with Michael Waltrip and NAPA.”

More in this category: « PHOTOS: Slocum 50 At 34 Raceway PHOTOS: Honda Indy Grand Prix Of Alabama »
back to top