Leary Wins With A Ford In BAPS USAC Sprint Run 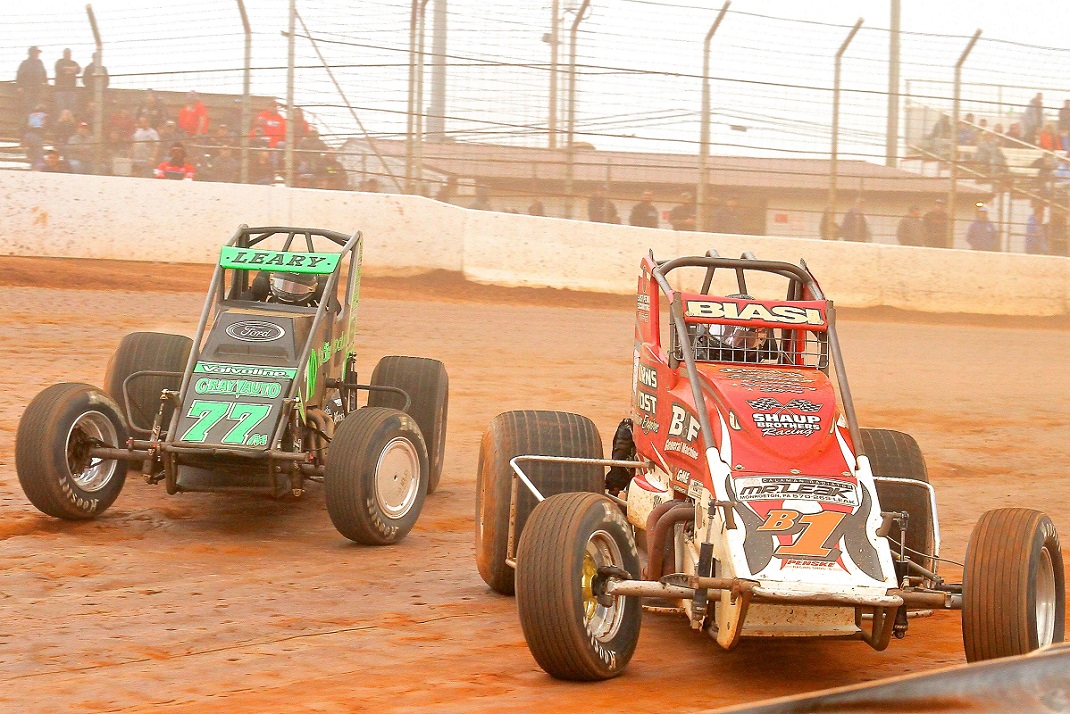 YORK HAVEN, Pa. – C.J. Leary withstood a bevy of bombs from both Justin Grant and Chris Windom to score his first victory of the USAC AMSOIL National Sprint Car season during a rare matinee performance Saturday at BAPS Motor Speedway.

In the process, Leary also provided the first victory by a Ford engine with the series since Bobby East’s triumph at Ohio’s Toledo Speedway in July of 2011.

“It’s huge for Bill and me,” Leary said. “With a new team, you obviously want to win right out of the box, but he let me build whatever I wanted. He said you can build whatever chassis and whatever shocks you want, but the only thing he made sure of was that we were going to run a Ford.

“The objective is to win a championship and he wanted to give it his best shot. Bill Michael, he’s a helluva guy.”

With a win in their back pockets, Leary and Michael feel that – as the lone rangers in the Ford camp – if they find that sweet spot as the season moves along, they’ll have a leg-up on the field in the Michael Motorsports/Kodiak Products – Gray Auto – Valvoline/DRC/Cressman Ford.

The car, driver and engine were inserted into a tricky test during the afternoon affair, which was pushed forward by four hours due to a high probability of inclement weather in the forecast for later that night, during the originally scheduled race time.

With track position key on this particular day, outside front row starter Leary took control of the 30-lap race from the get-go, driving by pole sitter Matt Westfall in the first two corners while Chase Stockon, then Justin Grant, slotted into second.

Leary was gone at that point, snipping his way through traffic with a full-straightaway lead in hand by lap 12.

Attempting to maneuver through a clogged lane of the race track, Leary dissected his way high and low around the competition, at times teetering over the cushion and brushing Hoosier rubber with the likes of Thomas Meseraull, who momentarily put Leary precariously sideways in turn three at the midway point.

With Grant cutting Leary’s lead in half, a yellow for debris in turn two reset the deck and cleared the traffic from Leary’s path.

As it turned out, traffic was arguably a safer position to reside in rather than being a sitting duck as the leader on a restart.

There, Grant fired his shot with a slider in turn one, going all the way past Leary and over the turn two cushion, which opened the door for both Robert Ballou and Windom to skate by.

Windom quickly snared second from Ballou with a slide job of his own in turn three moments later. All that was a major help for Leary, who raced away from the skirmish behind him with a clear view ahead.

“After Justin bombed me getting into one, I thought he was going to get upside down and collect me and whoever else was behind me,” Leary said. “I turned, crossed him over, and got back out in clear air, and I felt we had the car to beat on an open track. Even in lapped traffic, I felt pretty solid.”

However, the “great escape” that netted Leary a massive 5.467-second advantage was short lived when, on lap 21, Ricky Lewis and Brandon Mattox collided in turn one, flipping both over.

Joey Biasi also got caught up in the melee, spinning to a stop. All drivers involved were uninjured.

During the red flag period, Leary received a message from his father, Chuck Leary, a winner himself in the USAC Silver Crown Series who was in a similar position a time or two behind the wheel. He lent a bit of a “heads up” to his son in this case.

“After the red came out, my dad ran all the way around the race track to tell me to be prepared on the restart for another bomb,” tipped C.J. “He told me to think about protecting and sliding yourself. I contemplated for three or four minutes while riding around whether or not I should slide myself or keep doing what I was doing.

“As it turned out, I slid myself and almost gave it away.”

Windom, from second, used a massive run off turn two to set himself up for a slider attempt on Leary in turn three. Windom cleared Leary but snagged the cushion.

Leary turned down underneath Windom and the two banged wheels, with Leary getting himself back into the lead while Windom fell to third and Grant regained second.

“Chris actually made a mistake getting into three and four, and over rotated, and I think he thought I was going to be coming around the outside of him,” Leary explained. “He cleared me by a mile, but we made contact and I just drove off from there, and in clear air, our car was so good.”

As neither of them were close enough to levy a credible challenge after that, Grant and Windom could only look in the distance as Leary pulled away for a 2.651-second victory over Grant, Windom, hard charger Alex Bright and point leader Brady Bacon.

More in this category: « Kirkwood Lays Claim To Another St. Petersburg Win Spring Run Invasion Finale Goes To Thorson »
back to top