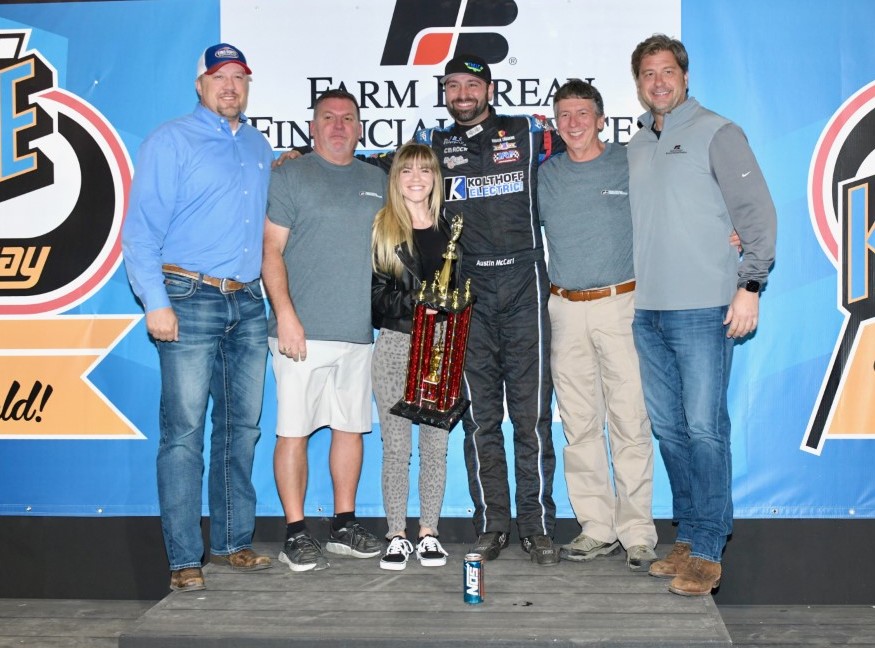 KNOXVILLE, Iowa — Austin McCarl registered his fifth 410 winged sprint car victory at Knoxville Racewat Saturday night, but it was his first as a car owner.

That made it emotional for the Altoona driver, who cashed in $4,000 aboard his No. 17a.

Josh Higday was no less excited, as he registered his first win since May 15, 2010 in the 360 class. It was the 18thof his career, tying him with Dean Chadd for fifth on the all-time win list. Matthew Stelzer won in the Pace Performance Pro Sprints class, putting him in a tie with Devin Kline for most all-time in that class (13).

When an invert of zero was drawn for the 20-lap 410 feature, most concluded that defending track champion, Brian Brown, would be tough to beat. They were right. He set quick time and won his heat going away.  At the start of the main event, he took off, opening a lead over Austin McCarl, Lynton Jeffrey, Ian Madsen and Justin Henderson.

Hunter Schuerenberg entered the top five on lap three, but up front, Brown was roaring through lapped traffic by lap five. On lap six, disaster struck for Brown when his power plant gave way.

McCarl, who charged from the rear of the field to third in last week’s opener, was equally fast and up to the task after inheriting the lead.  Behind him, Madsen took second from Jeffrey, and Brooke Tatnell surged from sixth to fourth.

McCarl opened up a big lead, while Madsen nailed down second, followed by Jeffrey.  Schuerenberg worked his way up to fourth with eight to go, and Tatnell finished fifth.

“This is a brand-new car,” said McCarl. “I scaled it yesterday. I was actually a little happier with the numbers than the other car. I was confident coming in if thing was close, and it was. I’ve wanted to do this in my own car so bad…nothing against what I’ve done before in winning races…but I did it by myself with great people behind me.  I’m so happy!  I’m here to win races, and not for points. I knew Ian was coming. That team’s really been clicking.”