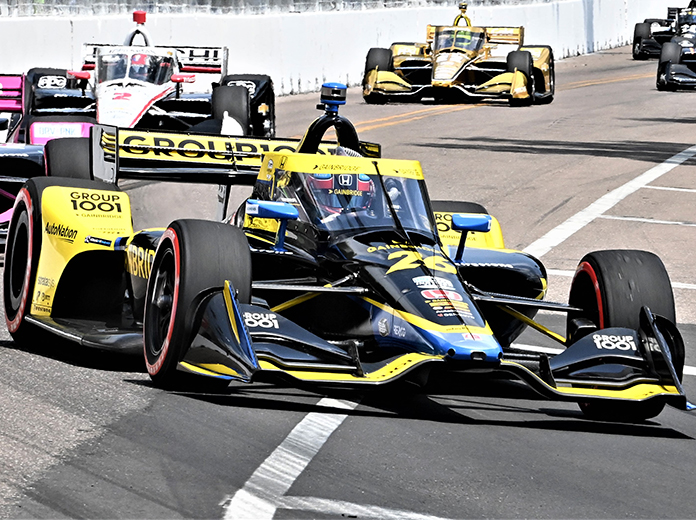 ST. PETERSBURG, Fla. – Apparently, the father-son combination of Bryan and Colton Herta in the NTT IndyCar Series is a perfect match.

The Andretti Autosport driver started on the pole and was never passed on the race track. He pitted twice during the 100-lap race and had more than enough power in his No. 26 Honda to fend off Team Penske driver Josef Newgarden, who was going for his third-straight St. Petersburg victory.

This came just one week after Herta was involved in a first-lap crash at Barber Motorsports Park.

“It was a great job by everybody,” Colton Herta said. “I’m so happy to rebound from Barber and get the momentum going for a championship season. Josef is so good around here and I was nervous because he was on used Red tires, but they were similar.

“I love that my dad is on the radio and I tied him for wins today, too, so that was special.

“What a start to the year.”

The father and son combination were so confident of victory, when asked during the final caution of the race who was more nervous, Bryan or Colton, the elder Herta said, “Neither of us.”

That confidence and performance may signal this year’s leading contender for the NTT IndyCar Series championship.

“The advantage of being on the radio is we know each other so well, there is unspoken communication,” Bryan Herta said. “When he first went to IndyCar, people asked me if he was better than I was.

“Nobody asks me that anymore.”

Ironically, both drivers were involved in the first-lap crash in turn five last week at Barber Motorsports Park.

“We lost a little too much ground to capitalize on the Reds, I didn’t want to overextend myself and risk anything,” Newgarden said. “It was a good day. To get a podium is really nice. I feel good after what happened last week and that both of us were able to have a good day today.”

Team Penske teammate Simon Pagenaud was third in the No. 22 Chevrolet followed by Jack Harvey’s No. 60 Honda and Scott Dixon’s No. 9 PNC Bank Honda.

Seven-time NASCAR Cup Series champion Jimmie Johnson spun out twice in the race and finished 22nd in the 24-car field.

Alexander Rossi and Graham Rahal were involved in a crash when Rahal saw an opportunity to pass, but Rossi’s Honda closed in the corner. After banging wheels, secondary contact sent both cars into the tire barrier.

Both were later able to continue. Rahal finished 15th and Rossi 21st.