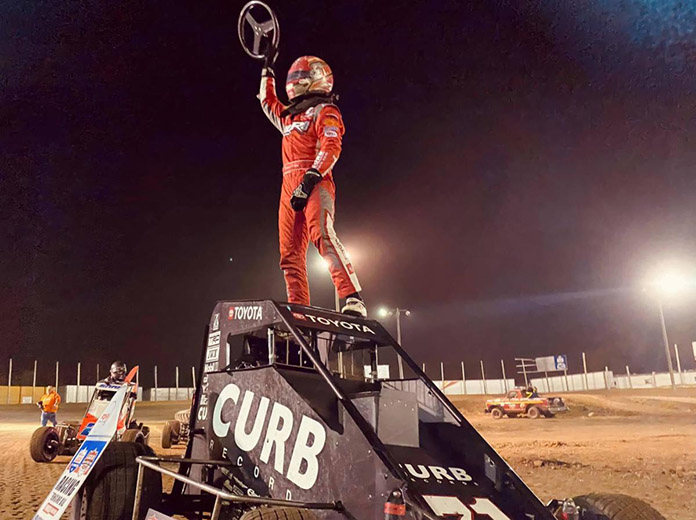 Winning his heat race from seventh, Pursley secured the high point honors and put his Keith Kunz Motorsports No. 71K on the pole. Looking to redeem himself after getting upside down Saturday at Lucas Oil Speedway while leading, the youngster was determined to find redemption and quickly took command in Sunday’s 30-lap event.

While the race heated up and the lead changed hands, Jake Neuman took command and found himself in a battle to keep it. Pursley regained the lead and McIntosh made himself a contender and stole the second spot from Neuman. McIntosh set his sights on Pursley before he found himself upside down after hitting the cushion in turn four.

Meanwhile, Karter Sarff was roaring though the pack from the 16th position aboard his family owned No. 21K and thanks to a well-timed caution, the field was now bunched back together.

Pursley continued to maintain the top spot and held on for his second Lucas Oil POWRi National Midget League victory.

Chasing Pursley to the stripe on Sunday was Sarff, Neuman, Ryan Timms and Emerson Axsom.

“To finally click off that first win of the 2021 season is pretty cool and to do it at Valley Speedway is really awesome,” said Pursley. “The race had a lot of yellows there and I never thought that we would see the checkered flag.”