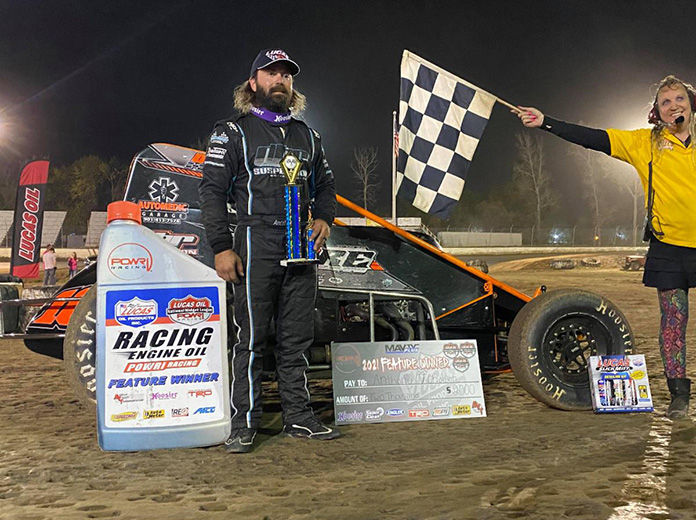 With a stout field of 27 POWRi WAR drivers, a trio of heat races were needed with Mario Clouser, Zach Daum, and Joe B. Miller all gaining the early wins.

It was high-point qualifier Nicholson leading the field of WAR drivers to the initial start, with Nicholson flying to the early advantage by using the inside line to perfection. Daum and Kory Schudy would stalk the leader as the laps progressed, while Nicholson stayed close to the low line.

Slower traffic would come into play as Nicholson tried to separate himself from the rest of the contenders with laps ticking away. An intense battle for the runner-up position between Daum and Schudy kept the podium interesting as the laps started to wind down with Nicholson out front.

Caution-free for twenty-five laps, Nicholson would claim his third feature win as he led every lap. Daum took second, with Schudy, Wesley Smith and Colten Cottle completing the top-five.

“Sometimes slow and steady wins the race,” Nicholson said. “As most people know I like running the bottom, it was a little slower than I thought it would go but track positioning helped as I was able to hang on for the win.”

More in this category: « Marks Makes A Statement In Ray Tilley Classic Plybon Breaks Through In The Northwest »
back to top